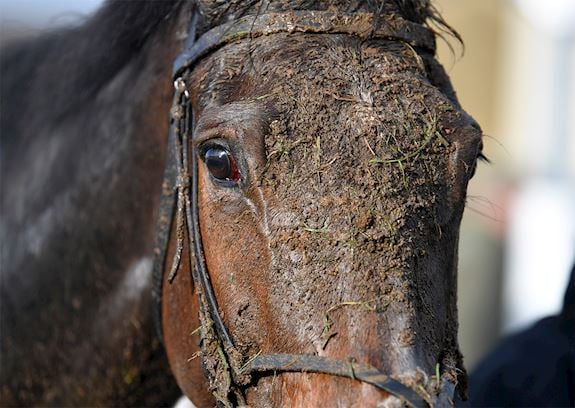 Last Royal (8-13 Favourite) may have a way to go to reach the heights of his Champion Hurdle-winning full-sister Honeysuckle, but trainer Keiran Burke admitted he is the “best horse” has had anything to do with after he moved closer to a Grade One outing of his own following a facile success at Wincanton today.

Having finished in the frame three times over hurdles since landing a bumper on his debut at Uttoxeter in July 2020, the Sulamani gelding finally added to that win with a front-running victory in the opening Racing TV Profits Returned Back To Racing Novices’ Hurdle (2m 5½f).

Making light work of the testing conditions, the 8-13 favourite cruised home as he liked to score by 42 lengths and set up a potential tilt at next month’s Grade One Sefton Novices’ Hurdle at Aintree’s Randox Grand National Festival.

Burke said: “He has been unlucky a few times and we have just found the wrong race every time he has run.

“He has a got a background with his sister but he is a proper horse himself.

“I’ve always said that he is the best horse I’ve had anything to do with and he has proved me wrong until now.

“We are delighted as he has shown us so much at home and stepping him up to three miles will only be a help.

“If we do step him up to a Grade One, it would be over three miles at Aintree. Whether he is good enough for a Grade One I don’t know but you don’t know until you try.

”If the owner (Glanvilles Stud Partners) wants to have a go at a Grade One then why not. It has been a while since I’ve had a good one.”

“He is still a frame of a horse and he will improve with another summer on his back.

“I’ve always said whatever he does as a hurdler he will be better as a chaser next season.”

Victory was also a 50th of the campaign for winning rider Nick Scholfield, who was reaching the milestone for the first time since the 2017-18 campaign.

Scholfield said: “I’ve managed to stay away from injury this season as I’ve had broken legs and other things in recent seasons.

“It was nice to get the 50 up on one for Keiran Burke as he gave me my first Festival winner (Hunt Ball in the 2012 Novices’ Handicap Chase).

“You try your best every day and deal with the cards you are dealt but all my trainers have been in really good form, so that helps. “

Reflecting on his half-century, Scholfield pointed to the Grade Two success of the Archie Watson-trained Stag Horn in the Ballymore Leamington Novices Hurdle at Warwick as a personal highlight.

He added: “All the winners have their own different reasons but I suppose the Grade Two on Stag Horn was good.

“Five Star Getaway in a valuable handicap at Kempton Park over Christmas was also good, as was the run in defeat put up by Santini on his last start at Cheltenham.

“Hopefully all those horses can do well in the spring.”

Owner Neville McMullan was left overcome by emotion when enjoying what he described as a “great day” after long standing maiden No No Tonic went one better than 12 months ago in the Watch Racing TV On Sky 426 Mares’ Handicap Hurdle (1m 7f).

Having feared he would never see the eight year old back on the track after she sustained a freak injury when finishing second in last year’s race, the Chard based-owner was all smiles after the daughter of Sulamani opened her account at the 18th attempt.

Sent off the 2-1 favourite to gain a belated first success, the Mark Gillard-trained mare made no mistake when routing her rivals by 11 lengths under the Sherborne handler’s son Fergus.

McMullan said: “That is a long time coming. A year ago this day she finished second then broke out of her horsebox and suffered a huge cut. She was off for six months and we never thought we would get back on a racecourse.

“It is absolutely unbelievable but we have got her back. She is a star.

“The heart was going and I was like just jump the last for God’s sake.

“She came back and finished third at Exeter, and she is also a Listed third, so she has her black-type and is now a winner. It is such a great day.

“We are going to celebrate this heavily.”

The win also provided a welcome boost for triumphant trainer Gillard, who was tasting victory for the first time in 289 days.

Gillard added: “She has always had ability. Last time she got a bit of black type at Exeter which secured her future as a broodmare and we thought if we could get a win next to her name that would be perfect.

“The blinkers have worked for her. I think we will get her out again quickly and try and nick another one.

“The horses have been running well but we’ve had no winners and it is all about winners so today is very special. We will enjoy this and have a few sherbets to celebrate.”

Trainer Colin Tizzard celebrated a one-two in the Watch Racing TV Novices’ Hurdle (1m 7f), but not in the order that the betting suggested after recent recruit Harlem Soul proved too strong for stable mate Name In Lights, the 11-10 Favourite.

Despite jumping markedly left at the final flight in the mile seven contest the 11-2 chance, who only joined Tizzard on Friday, found plenty up the run in too prevail by two and a quarter lengths to form the opening leg of a near 48-1 double for jockey Harry Cobden.

The trainer’s son and assistant Joe said: “He only joined us on Friday so I don’t think I can claim too much (with the win).

“He is quite a nice horse as we think a lot of the second horse. He joined us last week and he came with the entry. We said we would give him the run and find out about him.

“That was only his third run over hurdles and he didn’t go left for the first bits and pieces. He might have just got tired and it was one of those things.”