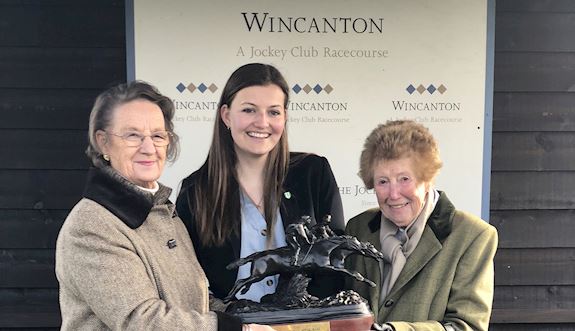 It was a rousing performance from the grey Southfield Torr who won convincingly in the hands of LBrd Jody Sole.

“I’m delighted with him as I didn’t think he’d win a race this year. It was a good ride from his jockey too and the ground seemed to suit him better today,”

said Mrs Yeoman, who lives at the majestic Southfield House near Nunney and owns the gelding in partnership with Angela Hart.

“That was lovely and I’m so pleased to win the race this race - it means a lot,” she said.

“It was the perfect race for Southfield Stone and I knew I could have Jody too which was an advantage. The horse has been a bit disappointing this year and I think its because he’s big and weak and needed a bit of time. He’s grown up a bit. There’s a race for every horse and this was his race. It’s also wonderful for Mrs Yeoman who is such staunch supporter of racing.”

Nicholls also trained the dam, Chamoss Royale who won several races before being sold to Mrs Yeoman. The mare’s other progeny are Southfield Theatre, Southfield Royale and Southfield Harvest.