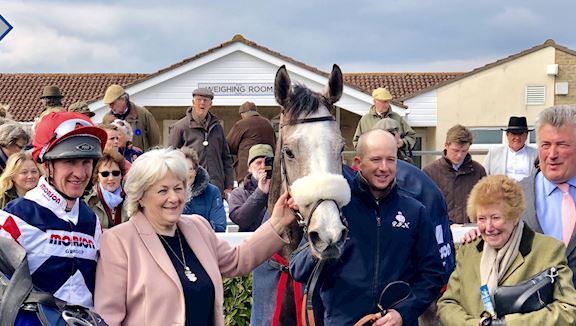 Frome racehorse breeder and owner Angela Yeoman’s Southfield Torr won the McCreery Military Amateur Riders Handicap Hurdle (sponsored by John and Done Chatfeild-Roberts) at Wincanton on Sunday. It was a rousing performance from the grey six-year-old who won convincingly in the hands of LBrd Jody Sole.

“I’m delighted with him as I didn’t think he’d win a race this year. It was a good ride from his jockey too and the ground seemed to suit him better today,”

said Mrs Yeoman, who lives at the majestic Southfield House near Nunney and owns the gelding in partnership with Angela Hart.

“It was the perfect race for him and I knew I could have Jody too which was an advantage. The horse has been a bit disappointing this year and I think its because he’s big and weak and needed a bit of time. He’s grown up a bit. There’s a race for every horse and this was his race. It’s also wonderful for Mrs Yeoman who is such staunch supporter of racing.”

Nicholls also trained the dam, Chamoss Royale who won several races before being sold to Mrs Yeoman. The mare has since bred several horses including Southfield Theatre and Southfield Vic, Southfield Royale and Southfield Harvest.