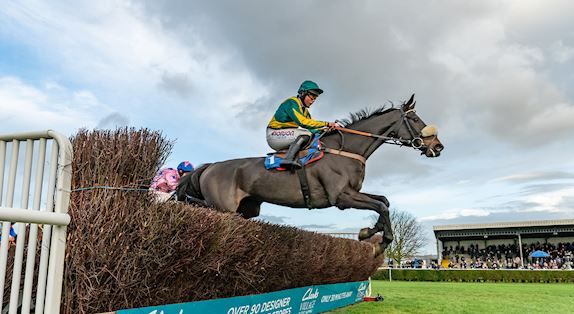 History could be made at Wincanton Racecourse if Present Man wins the Badger Ales Trophy for the third year in a row.

Taking place on Saturday, November 9, the race is set to be a real thriller on an action-packed card which also features the Grade 2 Unibet Elite Hurdle and the John Romans Park Homes Rising Stars Novices’ Chase.

But all eyes will be on the stunning black gelding and his young jockey Bryony Frost as they vie for their spot in history by lifting a third consecutive Badger Ales Trophy.

The race has thrilled the crowds since its inception in 1962 and is one of Somerset's most historic and important races. For Present Man’s trainer Paul Nicholls it has provided some of his fondest memories in racing for the nine-year-old is owned by Tessa and Mark Woodhouse with the latter also the chairman of race sponsor Hall and Woodhouse, an independent brewer and the longest current sponsor in racing.

The trainer said: “We’ve enjoyed so many great days at Wincanton and the success of Present Man in the Badger Ales Trophy two years in a row is right up there with the best of them. Seeing him win in the colours of Mark Woodhouse was fantastic. He puts such a lot into racing, and I’d love to win it again for him.”

Present Man is one of the most popular horses at Nicholls yard where he is ridden everyday by Millie Ortewell. She said: “He’s everyone’s dream horse as he’s so easy and happy when he comes out of his stable. He’s a lovely horse to ride.”

Flo Willis, who grooms him and tends to all the stable duties, added: “He’s one of the nicest horses I have ever had to look after. Everyone here loves him.”

With the Unibet Elite Hurdle attracting some of the fastest and slickest hurdlers in the past, like Zarkandar, Celestial Halo and Sceau Royal and the novice chase likely to be the starting point for some horses destined for the bigger stage, Badger Ales Raceday is a treat for all the family when Present Man could quite possibly gallop to one of the racecourse’s most historic moments.

To add to the sense of occasion, there will be live music between races, and also after by Loose Connections.