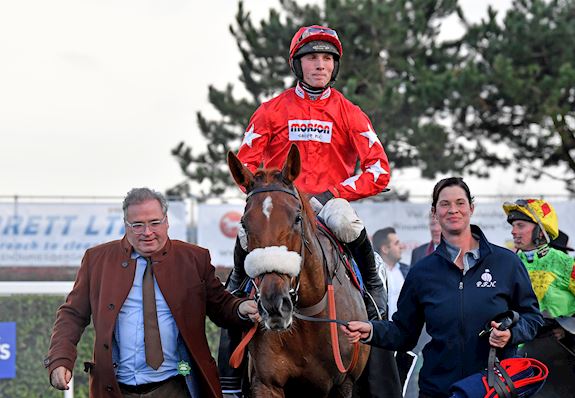 The County’s most famous race returns to Wincanton Racecourse on Saturday November, 7 and 15 runners will head to post for the feature race of the afternoon, the Badger Beers Silver Trophy Handicap Chase.

The race is set to be a real thriller on an action-packed card which also features the Grade 2 Unibet Elite Hurdle and the Rising Stars Novices’ Chase.

But all eyes will be on the stunning black gelding and his young jockey Bryony Frost as they vie for their spot in history by lifting a third Badger Ales Trophy.

The race has thrilled the crowds since its inception in 1962 and is one of Somerset's most historic and important races. Local trainer, Paul Nicholls has won the race an incredible 10 times, including the last three runnings. In 2019 with the impressive Give Me A Copper and Harry Cobden, following the popular Present Man’s back-to-back victories in 2017 and 2018 under Bryony Frost.

It wouldn’t be only Bryony Frost’s smile to light up the course if Present Man were to get his head back in front this year as owners Tessa and Mark Woodhouse have a particular affinity with the race. Mark is Family Director of the race’s sponsor, Hall & Woodhouse, an independent brewer and the longest current sponsor in racing.

Lucinda Gray, Next Generation Family Director and Company Relationship Manager at Hall & Woodhouse, said: “We are so proud to have backed this tremendous event for over half a century, making us the longest current sponsor in racing.

“2020 marks our 59th year of supporting the Badger Chase and since it is the county’s most historic race, it is only fitting that we continue to support due to our own vast heritage across the south.

“While we can’t watch another memorable day of Badger Chase Raceday history in person this year, many of the H&W family will be loyally watching from home with our fingers and toes crossed that Present Man gives us a lot to cheer about!”

With the Unibet Elite Hurdle attracting some of the fastest and slickest hurdlers in the past, like Zarkandar, Celestial Halo and Sceau Royal and the novice chase likely to be the starting point for some horses destined for the bigger stage, Badger Chase Raceday is the perfect afternoon treat to enjoy live on ITV Racing during lockdown.

Keep up with all the action on ITV4, Racing TV or Wincanton Racecourse’s Raceday Hub online.