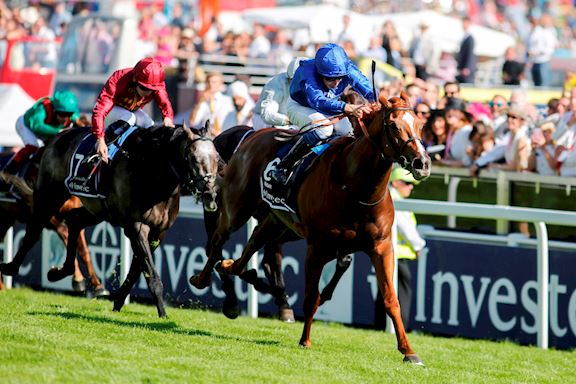 Masar provided a first victory for Godolphin's royal blue colours in the 239th running of the premier Classic, the Investec Derby, in a momentous result at Epsom Downs on June 2, 2018.

One of British racing's greatest supporters, Sheikh Mohammed's Godolphin operation has enjoyed G1 and Classic success all over the world, with such winners in 12 countries. Team Godolphin spans four continents and has horses in training in Dubai, Australia, Japan, France, Ireland, Britain and America, with a worldwide breeding operation under the Darley umbrella to match.

Despite its position as a racing powerhouse with approaching 5,500 wins since inception in 1992, until 2018, the Investec Derby, Britain's richest race, had eluded "the boys in blue".

Although Godolphin claims Lammtarra's Derby victory in 1995 (the Saeed bin Suroor-trained colt ran in the colours of Saeed Maktoum al Maktoum), Masar's win was the first in the Godolphin royal blue colours and the success was made even sweeter being trainer Charlie Appleby and retained jockey William Buick's first Investec Derby triumphs.

Speaking today during a media visit organised by Epsom Downs Racecourse at Moulton Paddock Stables in Newmarket, Appleby said: "Winning the Derby has been the highest point of my career, and for Godolphin and Sheikh Mohammed to do it in the blue colours was a dream.

"It was something that not only we here at Godolphin enjoyed. What I took from it all was that racing enjoyed it and the success was applauded by everyone within the racing community.

"We all know how much Sheikh Mohammad puts into the sport. When I stood here six years ago when I started training and people asked me what my goals and ambitions were, obviously to win the Derby was on the agenda and it was fantastic to do that with Masar last year.

"Masar went into the Derby with masses of experience. Obviously, he won the Craven and then was a good third in the 2,000 Guineas. We were confident to go straight to the Derby after that effort, because we thought he would stay the mile and a half.

"We didn't know if he was good enough to win a Derby as it was not a race that we had ever won before. He deserved to be in the race based on his past performances and he looked a live contender.

"As the race panned out, it was one of those few G1 or Classic races which you can watch comfortably as throughout the race, William always had Masar in the right position and had plenty of horse underneath him - it was an enjoyable race to watch and being the Investec Derby made it even more enjoyable.

"In terms of what it takes to be a Derby horse, I like a horse who has been well travelled and takes nice experience into the race. You then have to look at them as an individual and I have been lucky with the people around me who told me that Masar was potentially going to be the right horse for the Derby given his make-up. He is a very well balanced horse and we thought he would be able to take the undulations of Epsom and had a pedigree which would suggest that he would see the trip out."

Masar has not raced since the Investec Derby due to injury and could return at Royal Ascot, with the G1 Prince Of Wales's Stakes (Wednesday, June 19) over 10 furlongs or the G2 Hardwicke Stakes (Saturday, June 22) over 12 furlongs the possible options for the four-year-old son of New Approach.

Discussing the colt's preparation for returning to racing, Appleby continued: "Masar is cantering away and we are very pleased with him. Physically, he has done very well. He is a monster and a gorgeous looking horse.

"We have made the entries for the Prince Of Wales's Stakes and the Hardwicke Stakes. It is a day by day situation with him and he is doing everything we have asked of him. The only thing I would emphasise is that he is a horse who helps himself potentially getting to Ascot because he is an athlete and a very good horse. He is a very clean-winded horse and if he comes in time for Ascot then great, we will be there.

"However, if I'm a gallop short with him, then I'll wait as I'm not going to force him into getting to Ascot. It would be a lovely stage to bring him back, but it is a big stage and I wouldn't want to bring him back there only 75% fit. Let's hope it's all good news from here on in."Personally, we feel that the mile and a quarter will be the right starting point for him. We saw what he has done over a mile and we haven't explored 10 furlongs. The Prince Of Wales's is a G1 race, but I feel after such a long layoff, 10 furlongs could be the better starting point. Our ultimate aim is going to be the Prix de l'Arc de Triomphe with him."