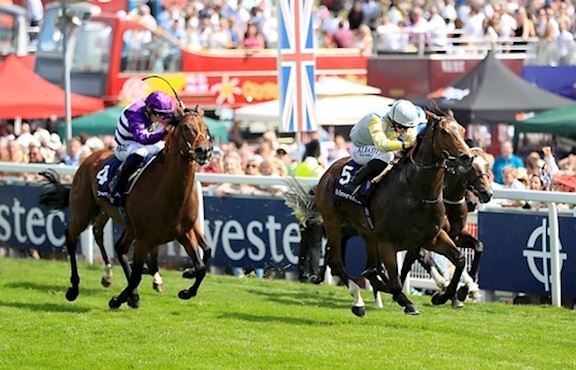 ZAAKI CONFIRMS HIMSELF ANOTHER STOUTE IMPROVER
Sir Michael has long been acknowledged as the master when it comes to improving older horses, but if further proof were needed it was provided when Zaaki (Ryan Moore, 11/8 favourite) stepped up again on last month's Listed win at Ascot Leicester for a first success at G3 level in the Investec Diomed Stakes.
The Leroidesanimeaux four-year-old finished strongly to beat Oh This Is Us by a length in a new course record of 1m 40.46s, taking 0.29s off the long-standing record of 1m 40.75s for the extended mile set by Sylva Honda in the corresponding race in 1991.
Stoute was delighted and said: "He ran some very good races last year but gelding hasn't harmed him and you would have to say he has suddenly progressed. He's a powerful horse who still looks like a colt, and he's got mile and a quarter form so I didn't think the trip would be a problem.
"I felt he might be having a little difficulty with the track, but he's still won a Group 3 at Epsom. We try at home, but you can't practise coming round Tattenham Corner and a lot of horses would cope better if they came here again in a month's time."
He added: "This looked the right race for him after Ascot, but we'll have to stop and think about where we go next now. I'd have no fears about going back up to a mile and a quarter though."
MOORE BAGS GROUP THREE WINNER FOR STOUTE
Ryan Moore kicked home a welcome winner at the Investec Derby Festival 2019 having suffering plenty of near misses over the two-day meeting so far, including when a neck second in the Investec Oaks aboard the Aidan O-Brien-trained Pink Dogwood.
Moore steered the Sir Michael Stoute-trained Zaaki, the 11/8 favourite, to a length success in the Group Three Investec Diomed Stakes.
It was the gelded son of Leroidesanimaux's second win in succession, his first at Group level with the four-year-old having won over a Listed race mile at Ascot last time.
"He is a horse that has got better this year," said Moore. "It probably wasn't his track, although they are saying it's a track record. He won nicely at Ascot, when he beat a very good horse, and was probably entitled to beat these today."
HANNON & JARVIS PLEASED
Richard Hannon praised the performance of Oh This Is Us (8/1), who finished a creditable length second to 11/8 favourite Zaaki, trained by Sir Michael Stoute in the £90,000 G3 Investec Diomed Stakes over an extended mile.
Hannon said: "Oh This Is Us is my favourite horse. My Dad trained for 40 years and I've been training for four - he is our only winner outside Europe (Meydan, February 17, 2018).
"He is a lovely horse and he's run another good race today."
The William Jarvis-trained Chief Ironside (16/1) was a further length and a quarter back in third.
Jarvis commented: "I am really delighted with him. He has got a big one in him.
"He just got caught out - that hill has caught him out in the last 100 yards. If it was a mile maybe he would have won, but there are no excuses.
"The winner is a good horse and progressive, a typical Sir Michael Stoute horse.
"I think we will go for the Royal Hunt Cup (at Royal Ascot later this month) next."
Jockey Jason Watson added: "Chief Ironside ran a cracker. I think the hill just caught him out a little bit towards the end."