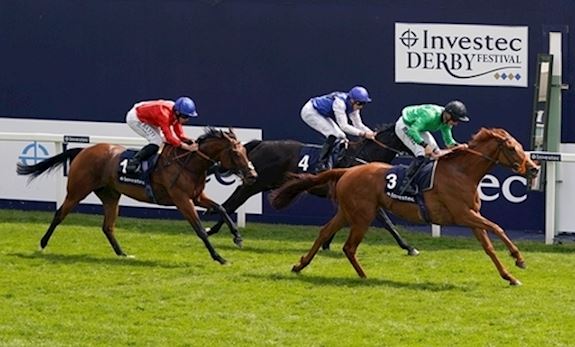 ANNA NERIUM A LANDMARK 1,000TH WINNER FOR TRAINER RICHARD HANNON
Richard Hannon registered a landmark 1,000th winner when Tom Marquand brought 2018 runner-up Anna Nerium (9/2) from last to first to land the G3 Princess Elizabeth Stakes by a length and a quarter from Awesometank.
Hannon, who took over the licence from his father Richard Hannon senior in 2014 and was champion trainer in his first season with 206 winners, has had his eye on the milestone for a few weeks.
He said: "It's lovely to get it in a significant race and she's a very good filly who was unlucky in this race last year. Dad's not here - he was 74 two days ago and is at home with tears in his eyes according to mum - but I've got the rest of the family here."
Hannon enjoyed Classic success with Night Of Thunder in the 2014 2,000 Guineas and again with Billesdon Brook in the 1,000 Guineas four years later, and he has also enjoyed major G1 wins with the likes of Barney Roy and Olympic Glory.
He added: "I think Dad finished up with around 4,500 successes, so I've got a long way to go, but 1,000 is a lot of winners and I'll be delighted if I end up with half as many as him.
"I'm delighted to win this one for Jeanette McCreery, who bred Billesdon Brook and has been such a good supporter along with her late husband Bob. We don't make champions - she does. We just get them fit.
"I'm not sure Anna Nerium loved the track, but she dealt with it. Royal Ascot isn't out of the question, but I'd love to think she could go close in something like the Prix Rothschild at Deauville."
ANNA BRINGS UP 1000 FOR HANNON
Richard Hannon registered his 1,000th career winner after Anna Nerium (9/2) captured the £90,000 G3 Princess Elizabeth Stakes at Epsom Downs.
Ridden by Tom Marquand, the four-year-old daughter of Dubawi swooped late to capture the extended mile contest by a length and a quarter.
William Haggas' Awesometank (3/1) was second.
Anna Nerium and Marquand finished second in last year's renewal and the jockey was delighted to win the contest and provide Hannon with a personal milestone.
The jockey said: "That was a bit of redemption for Anna Nerium. Last year in this race, she was slow away and got squeezed out early. I felt I was unlucky not to win that time around.
"That was playing on my mind the whole time today. I didn't want to rush her early and I knew she would handle the camber and it worked.
"It is very satisfying to win today and it's Richard's 1,000th winner as well. We were talking about it this morning and he has managed it in about five and a half years, which is about six or seven years quicker than anybody.
"It is a phenomenal achievement for him and for a pretty special filly in Anna Nerium to do it for him is pretty sweet.
"I adore this filly. Anna Nerium was my first G3 winner (Salisbury, September 7, 2017) so it's very special to win on her again."
AWSOME'S SECOND LEAVES HAGGAS A LITTLE DISAPPOINTED
Second placed Awesometank, sent off at 3/1, was overhauled in the closing stages of the extended mile G3 Princess Elizabeth Stakes by 9/2 winner Anna Nerium, who the William Haggas-trained filly had beaten by a head on her latest outing in a Listed contest at Goodwood over a mile.
Haggas commented afterwards: "She ran very well.
"The winner overturned the form in a Group race which is a little disappointing, but maybe we will get her back."
Jockey Doyle added: "It was a really good run. I am chuffed with her. We got a nice split up the rail and she hit the line well."
IMPROVED PERFORMANCE FROM VERACIOUS
Jockey Ryan Moore played a late card on the Cheveley Park Stud-owned Veracious (2/1f) in the Group Three Princess Elizabeth Stakes over an extended mile, but Frankel four-year-old filly was just denied and finished third, beaten a neck for second by Awesometank.
It was the filly's second start of 2019, first time out this season she finished fourth in the Group Two Dahlia Stakes.
"It was a better performance than at Newmarket last time, and I am surprised they made her favourite as she had the winners' penalty," said trainer Sir Michael Stoute. "I think she is progressing, she didn't stop galloping. She was third in the Nassau Stakes (1m1f197yds) last year and I think that might be her best trip. We've no plans as yet."
To view sectional times for this race, please click HERE
FURTHER GOING CHANGE AT EPSOM DOWNS
The official going for all courses at Epsom Downs was changed to
Good to Firm
after the first race.