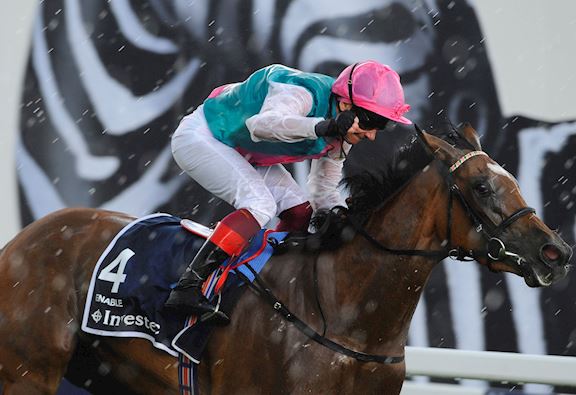 Enable has been revealed as the 2019 Cartier Horse Of The Year at the 29th annual Cartier Racing awards.

The Nathaniel mare, the only European-based filly or mare to gather career earnings of over £10 million in prize money, remains in training for 2020.

Stradivarius wins the Cartier Stayer Award for the second successive year. Owned and bred by Bjorn Nielsen, the five-year-old Sea The Stars horse was nearly all-conquering with repeat wins in the G2 Matchbook Yorkshire Cup, G1 Gold Cup at Royal Ascot, G1 Qatar Goodwood Cup and G2 Weatherbys Hamilton Lonsdale Cup handing him the Weatherbys Hamilton Stayers Million for the second time. He also went on to take the G2 Magners Rose Doncaster Cup, making him the eighth winner of the Stayers' Triple Crown. It is intended that he too will remain in training for 2020. The other nominees for Cartier Stayer were Dee Ex Bee, Kew Gardens and Logician.

Another repeat winner was Too Darn Hot, who is the 2019 Cartier Three-Year-Old Colt. Owned by Lord Lloyd-Webber and bred by Lord and Lady Lloyd-Webber's Watership Down Stud, the son of Dubawi was crowned Cartier Two-Year-Old Colt in 2018. After an interrupted start to this season, he once again demonstrated tremendous ability with G1 victories in the Qatar Prix Jean Prat and Qatar Sussex Stakes. The other nominees for Cartier Three-Year-Old Colt were Circus Maximus, Japan and Logician.

The fifth award on the night for the Gosden-Dettori combination is Cartier Three-Year-Old Filly, which goes to Star Catcher. Another homebred, Anthony Oppenheimer's daughter of Sea The Stars got better and better as the season progressed, with victories in the G2 Ribblesdale Stakes at Royal Ascot, G1 Kerrygold Irish Oaks, G1 Qatar Prix Vermeille and G1 QIPCO British Champions Fillies & Mares Stakes. The other nominees in the division were Anapurna, Hermosa and Iridessa.

Blue Point, trained by Charlie Appleby, went through 2019 unbeaten in five starts and wins the 2019 Cartier Sprinter Award. The five-year-old Shamardal horse began the campaign at Meydan, UAE, where his three successes were topped with G1 success in the Al Quoz Sprint Sponsored By Azizi Developments on Dubai World Cup night in March. He was then given a near three-month break and headed to Royal Ascot. On day one, he was the comfortable length and a quarter winner of the G1 King's Stand Stakes over five furlongs. He turned out to contest the G1 Diamond Jubilee Stakes on day five over a furlong further, when he had to work harder but came out on top again. He became the first horse the complete the King's Stand/Diamond Jubilee double in the same year since Choisir in 2003 and the first ever to win both races when they have both been run at G1 level. The other Cartier Sprinter nominees were Advertise, Battaash and So Perfect.

Godolphin gained the honours in the Cartier Two-Year-Old Colt division with Pinatubo. Another son of Shamardal trained by Charlie Appleby, Pinatubo was unbeaten in six starts between May and October. After an impressive five-length success in the G2 Qatar Vintage Stakes at the end of July on his fourth start, he was truly breath-taking when running away with the G1 Goffs Vincent O'Brien Stakes by nine lengths at the Curragh in September. This made him the highest-rated juvenile on official British Horseracing Authority ratings since Celtic Swing a quarter of a century earlier. He ended 2019 with a second G1 success in the Darley Dewhurst Stakes at Newmarket. The other nominees for Cartier Two-Year-Old Colt were Earthlight, Kameko and Siskin.

Owner-breeder Prince Khalid Abdullah gains a third Cartier Racing Award this year courtesy of the unbeaten Quadrilateral, who is named Cartier Two-Year-Old Filly. The Roger Charlton-trained daughter of Frankel was unbeaten in three starts under talented young jockey Jason Watson and her season culminated with victory in the G1 bet365 Fillies' Mile at Newmarket in October. The other nominees for Cartier Two-Year-Old Filly were Albigna, Daahyeh and Raffle Prize.

The Cartier/Daily Telegraph Award Of Merit for 2019 went to Pat Smullen. One of the outstanding jockeys of his generation and a nine-time champion in his native Ireland, Pat received devastating news in 2018 when diagnosed with pancreatic cancer. A man of outstanding resilience, he has thrown all his efforts into helping others who face the same condition. His outstanding fund-raising efforts have resulted in over €2.5 million being raised for Cancer Trials Ireland and culminated at the Curragh in September with the Pat Smullen Champions Race For Cancer Trials Ireland which saw stars from the past including Sir A P McCoy and Ruby Walsh return to the saddle.

Harry Herbert, Cartier's Racing Consultant, commented: "Enable becomes just the third horse to be named Cartier Horse Of The Year twice, following in the illustrious hoofprints of Frankel and Ouija Board. Bountiful talent combined with a courageous running style make her a joy to watch and it is no wonder that Enable is so popular with everyone in racing. It is exciting that Prince Khalid Abdullah is keeping her in training for 2020, when she could become the first three-time winner of the Cartier Horse Of The Year.

"Trainer John Gosden and jockey Frankie Dettori are one of the most enduring partnerships in horseracing and virtually everything they touched in 2019 turned to gold. Stradivarius is firmly among the immortals in the stayers' division, while it was heart-warming to see Too Darn Hot return to his best in high summer. Star Catcher just seemed to get better and better as 2019 went on and emerged as the best of her generation.

"It was also a great year for Godolphin. It takes a rare combination of talent and tenacity to win two races at Royal Ascot but Blue Point did exactly that as he topped and tailed the week by bagging both G1 sprints.

"Pinatubo was impressive throughout the year and his victory at the Curragh was a real wow moment. Officially the best juvenile in 25 years, his return in 2020 is going to be hugely anticipated.

"As well as his established superstar Enable, Prince Khalid Abdullah also has unbeaten two-year-old filly Quadrilateral to look forward to in 2020.

"Seven of the eight equine winners at the 29th Cartier Racing Award are the product of owner-breeders who form the backbone of our great sport and I extend my congratulations to Prince Khalid Abdullah, Sheikh Mohammed, Bjorn Nielsen, Anthony Oppenheimer and Lord and Lady Lloyd-Webber.

"Pat Smullen, the Cartier/Daily Telegraph Award Of Merit winner this year, is an inspirational figure. As well as his brilliance in the saddle, his dedication to help others who face the same health issues tells us what an outstanding human being he is.

"We are all set of for a night of celebration and high emotion at the 29th Cartier Racing Awards."