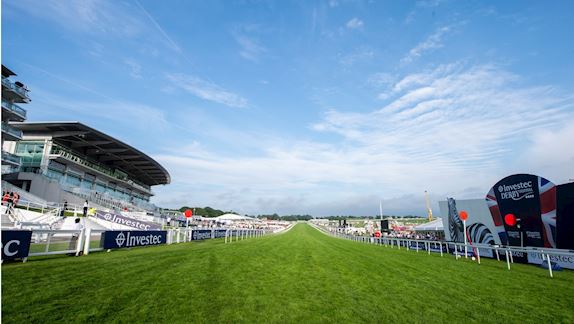 Nine days to the 241st Investec Derby at Epsom Downs

The 2020 Investec Derby is firmly on the horizon, with Britain's premier Classic set to take place behind closed doors at Epsom Downs on Saturday, 4th July.

Entries for the 12-furlong G1 highlight, which has a total prize fund of £500,000, are to be made on Monday, 29 June and the runners will be revealed shortly after 10am on Thursday, 2 June.

Ahead of this season, English King was considered a dark horse for the Investec Derby and the son of Camelot, winner of the Investec Derby in 2012, showed he was far more than that with a dominant victory in the Listed Derby Trial Stakes at Lingfield Park on June 5.

It was announced earlier this week that English King will be ridden by Frankie Dettori for the first time in the Investec Derby.

Kameko ended 2019 with G1 success in the rearranged Vertem Futurity Trophy at Newcastle, historically a good trial for the Investec Derby, and was again strong at the finish over a mile when capturing the opening Classic of the season at Newmarket on 6 June.

The son of Kitten's Joy has the chance to emulate Sea The Stars (2009) and Camelot (2012), who are the only QIPCO 2000 Guineas winners in the last 30 years to double up in the Investec Derby

Andrew Balding said: "The whole thing about Derby Day is not just the examination of a horse created by the track and the idiosyncrasies provided by Epsom Downs, but also the atmosphere. It is a test like no other and it is sad that there will be no crowds there this year. It is what it is, and the absence of a crowd should not be to the advantage or disadvantage of any horse.

"I have found since the resumption of racing that the horses have been so relaxed, it is amazing. We have hardly had a horse sweat on course pre-race, even the two-year-olds, which is extraordinary. Having no crowds has been a help for trainers, but we certainly don't want it to last!

"I thought English King was very impressive at Lingfield when he beat one mine Berkshire Rocco, who went on to run well in the Queen's Vase at Royal Ascot. Obviously, Frankie is going to ride English King and he has everything to go with it. He looks a worthy favourite - the Lingfield Derby Trial is a good test for Epsom and he obviously stays, so he has already answered two of the questions which we have over Kameko.

"Whatever Aidan (O'Brien) sends over has got to be given the utmost respect. He has a strong team of middle-distance horses every year.

"I will also be running another horse called Khalifa Sat, who won the Cocked Hat Stakes at Goodwood. He is a horse we think a lot of, and he stays well. As long as the ground is fast, he will run. As with any Derby, there will be 14 runners or so and you wouldn't fall over in amazement if any of them won."

Speaking about jockey Oisin Murphy, who will partner Kameko, Balding added: "What Oisin has done so well at over the past couple of years is developing a big match mentality, which is a massive help when you are in the pressure cauldron of G1 races. Obviously, Frankie and Ryan (Moore) have got it in spades, but for some as young as Oisin to have it is a big help and I am thrilled he is riding for us."

Ireland's perennial champion Flat trainer Aidan O'Brien has a formidable record in the Investec Derby with a joint-record seven successes in total, five of which have come since 2012.

The stable also confirmed that this trio will be joined by Mythical, who finished third in the G1 Criterium de Saint-Cloud in October, and Amhran Na Bhfiann, a full-brother to 2012 Investec Oaks winner Was. G2 scorer Armory has the option of the Prix du Jockey Club at Chantilly the following afternoon.

The 2020 Investec Derby will be run at the revised time of 4.55pm. The race has been moved from its usual slot at 4.30pm to help further increase the audience for the world's greatest Flat race.

A fantastic seven-race programme on Investec Derby Day also features the £250,000 G1 Investec Oaks (3.40pm) over a mile and half for three-year-old fillies.

O'Brien's typically strong crop of three-year-old fillies includes another Classic heroine in Peaceful, who ran away with the G1 Irish 1,000 Guineas at the Curragh on 13 June.

The trainer said: "Both of them are well and on the programme for the Investec Oaks. Now, it is a possible that if Love goes to Epsom, then Peaceful might miss it and go straight to the Curragh [for the Irish Oaks]. It is possible that Love could do both."Love likes nice ground and, listening to the lads, I think they want to keep her on nice ground. If the ground went soft, she would probably sidestep wherever, but it looks like the ground is going to be nice at Epsom."

In-form duo John Gosden and Frankie Dettori, who combined to win the 2019 Investec Oaks with Anapurna, are set to throw down a strong challenge to Love with Frankly Darling.

After a five-length victory at Newcastle on 1 June, Frankly Darling staked her claim for G1 honours with a classy success in the G2 Ribblesdale Stakes at Royal Ascot.