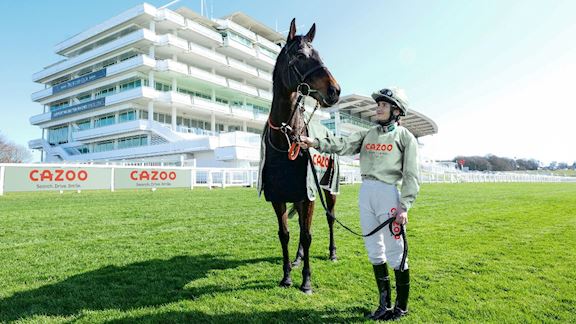 Godolphin’s Hurricane Lane announced himself as a genuine Cazoo Derby contender by making it three wins from as many starts with a determined victory in today’s Group Two Al Basti Equiworld Dante Stakes at York.

It was Aidan O’Brien’s second string, Roman Empire, who went to the front when the 10 runners left the stalls and soon held a clear advantage under Hollie Doyle.

The 25-1 chance began to come back to the field entering the final quarter mile, with Hurricane Lane (5-1) and Megallan (14-1) emerging as the key challengers.

Hurricane Lane hit the front inside the final furlong and kept on strongly under William Buick inside the closing stages by three quarters of a length from Megallan. The Aidan O’Brien-trained 13-8 favourite High Definition kept on at one pace to take third, another length and a quarter adrift.

Hurricane Lane is a son of Frankel and out of the Shirocco mare Gale Force, who enjoyed her finest hour when taking the Listed Prix Denisy over just short of two miles at Saint-Cloud in 2015.

Successful on his only two year old start over a mile on heavy ground at Newmarket in November, Hurricane Lane made a winning reappearance in a 10 furlong conditions contest at Newbury last month. The colt is engaged in The Cazoo Derby, having received an entry at last month’s second entry stage.

Reaction from bookmakers was varied, with odds of 6-1  and 8-1 quoted for the mile and a half Classic at Epsom Downs in just over three weeks’ time.

Alex Merriam, assistant to trainer Charlie Appleby, said: “I’ve just spoken to Charlie and we’ll see how he is when we get home and all things being well we should be aiming for the Derby.

“William was happy for him, he’s picked up nicely and gone through the gears and seen it out well.”

Speaking to ITV Racing, William Buick said of the unbeaten Hurricane Lane: “I was very pleased. This is usually the most important (Derby) trial.

“It’s his third run only so he’s still learning on the job. He jumped out and we got ourselves a nice position where I could just leave him alone a little bit and build him up how I wanted to and it rode like a good race. For a trial it was a true run race.

“I guess the first half mile was a bit steady but this horse will benefit from a mile and a half. He’s got a lovely attitude, he really has. He’s shown now in his last run and this run that he loves nothing more than a battle on his hands.”

Asked if there was any comparison with his 2018 Derby winner, Masar, Buick replied: “No. He’s different. Masar was very quick. Really I was surprised how well Masar got the mile and a half. But this horse is a different model and this horse will definitely stay.”

Speaking later Buick added: “It’s a good trial and I think this year’s race had plenty of quality in it. I think what this horse has in his locker is that he’ll improve for a mile and a half.

“He will stay and everything he does he does right - he went through the gears nicely and when he got company he battled back. He’s gone from strength to strength and he’s improved with every run so far and he’s taken them all so well.

“I can’t really see what more you can ask from him - he’s answered every single call and obviously for the next step he’ll have to step up again. It’s never an easy task but at least he’s got the experience now and he’ll get the mile and a half.

“The first half of the race was even and then Hollie stepped up the gas. On this track you never want to give horses a lead like that but obviously the leader stopped and it was a solid run for us. It was a truly run race, unlike some of the other trials so far and it was an end to end gallop.

“He’s a little bit different to Golden Horn (who Buick partnered to victory in the 2015 Dante Stakes). He was quite pacey while this horse goes through the gears a little more gradually. Both horses came into this race with similar profiles and if he can do what Golden Horn did I’ll be very happy!

“Masar was a really good two year old and had Group One form as a juvenile as well as finishing third in the Guineas. He had a lot of pace so the one worry we had with him going into the Derby was staying a mile and a half and he got it very well, so you never really know until the day with that race.

“Hurricane Lane is a big horse and at home he’s just a lovely horse to be around. He answers every call and you can see him visually going through the gears. On the line he was well on top there and even pricking his ears – so it was a good performance.”

John Gosden, who trains runner-up Megallan alongside son Thady, commented:  “I thought he ran a great race. He was here as a trial for the Prix Du Jockey Club and all being well that’s where he’ll go.

“He’s run a lovely race and that is his trip, though the ground was a touch dead for him and he’s got a better turn of foot on quicker ground so we’ll see what it is over there. I’ve always liked the winner. William was telling me on the plane home from Chester that he thought a lot of him.

“I think the winner there is a very legitimate nice horse. I think the two best trials for the Derby are the Derrinstown and the Dante and he is a proper Derby horse.”