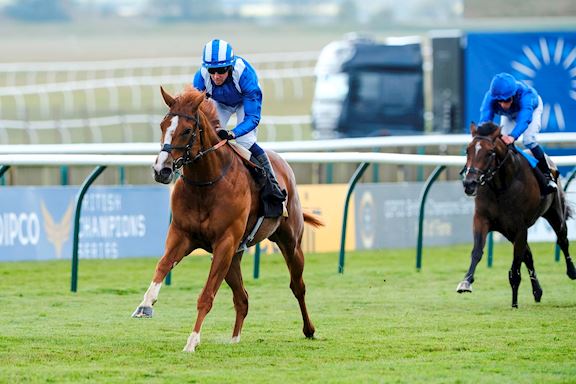 Mohaafeth “heading in the right direction” ahead of the Cazoo Derby

Connections of leading Cazoo Derby contender Mohaafeth believe he will take “enormous confidence” with him to Epsom Downs next month and is “heading in the right direction” ahead of his bid for Classic glory.

The William Haggas-trained son of Frankel burst into contention for the premier Classic after completing a hat-trick of wins for the year with a facile success in the Listed Betfair Newmarket Stakes over a mile and a quarter at Newmarket earlier this month.

Although Mohaafeth, who is the general 5-1 third favourite for the Derby, will have to take another step forward in the Group One feature, along with proving he stays a mile and a half, connections are confident he has plenty more to offer.

Angus Gold, racing manager to owner Shadwell Estate Company, said: “He has come out of his race at Newmarket really well and William said he was bouncing after the race.

“I saw him on Saturday and he physically looks a lot stronger than he did last year. He is not built like a big long striding horse. When you look at him he looks like he is a mile and a quarter horse but I’m sure he will stay a mile and a half.

“You love to see a horse travel like how he did at Newmarket. It gives the horse enormous confidence. He has now won three races this year and after doing that last time he will pretty much have his head in his chest and his confidence must be good.

“When a horse travels like he did last time at Newmarket it is always a sign they have some sort of class.”

While Gold expected Mohaafeth to progress with age he admits to being slightly surprised as to how much he has already achieved this year.

He added: “Certainly to a degree we have been surprised. When you look back last year he was disappointing on his second run at Salisbury and I thought he would improve more.

“Jim Crowley (jockey) said at the time he thought it was a good race and that he was a weak horse that just needed more time.

“To that extent I wasn’t expecting anything as exciting as what he has shown so far. He won well first time out at Lingfield then he came out and improved again second time out on his first outing at Newmarket and then last time back at Newmarket he stepped forward again.

“To that degree it has been a pleasant surprise but with a horse bred like how he is he was only going to get better as a three year old.”

Although an appearance in The Cazoo Derby remains next on the agenda for Mohaafeth an alternative target could be looked at if conditions come up soft according to Gold.

He said: “For a Frankel he is quite a handy size horse which you would think would be useful on the track there but you never know how they will handle it until they try.

“The one proviso is that William feels he is very much a top of the ground horse and if it went soft there is a strong chance he wouldn’t run.

“Other than that he is heading in the right direction both mentally and physically and he seems to be improving all the time.”

Assessing the potential opposition Gold believes that Aidan O’Brien’s recent Derrinstown Stud Derby Trial Stakes winner Bolshoi Ballet is the horse they all have to beat on June 5th.

He added: “We will just see what the next couple of weeks bring and we will be watching the Dante with interest at York on Thursday.

“Aidan O’Brien’s horse that won at Leopardstown on Sunday was extremely impressive and from what I’ve seen so far is the horse everybody has to beat.

“We’ve still got three weeks and plenty can happen but our horse is well and we are pleased with where we are.”

Owner Shadwell Estate Company represents the racing interests of the late Sheikh Hamdan Al Maktoum, who sadly passed away in March this year. His famous blue and white silks were carried to Derby success by Nashwan (1989) and Erhaab (1994).