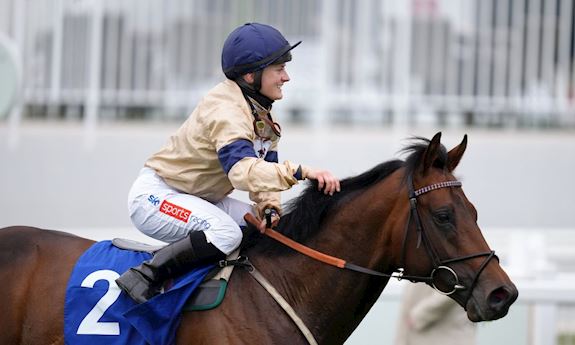 Hollie Doyle celebrated a double on the day as Mehmento set himself up for a trip to Royal Ascot with an all-the-way victory in the Listed Play Coral ‘Racing Super-Series’ For Free Surrey Stakes over seven furlongs.

Trainer Archie Watson said of his 11-8 favourite: “We’re delighted with him. We were quite worried about the ground only because he hadn’t picked up on bad ground in France in the French Guineas but Hollie said he handled it good today. She held him together down the hill and came to the near side rail and he was always travelling well and at least now we know for the future.

“He ran at Southwell twice in the winter because they were the right races for him. I know a few must have thought we didn’t think very much of him, but he’s by Mehmas who has an excellent record at the track as a stallion and we won very impressively twice.

“He then went to the Greenham and was only beaten a neck by a Group Two winner who wasn’t carrying a penalty in Chindlit so we were happy to take a shot at the French Guineas. He’s come out of it well, come here today and shown what he can do. I do think he’s a serious horse – he’d be one of the best I’ve trained anyway.

“He’ll go to Ascot and we’ll have to have a few discussions about which race he goes for. It’ll either be the Commonwealth Cup or the Jersey Stakes and the Prix Jean Prat will probably his main aim for the summer over in France.”

Jockey Hollie Doyle added: “That was an excellent performance, really impressive. I knew he was capable of something like that so it was good to get him back. He just lengthened, he’s got loads of gears and a bit up his sleeve so there’s a lot to come. We’ve always thought an awful lot of him, he just didn’t stay on that heavy ground last time.”

“We deliberated at length at Beverley before running him on soft ground. We didn't think he'd like it and to be honest he's been a revelation on it. He seems to handle it very well. The horse in second probably wants a mile, but he ran a really good race and I'm very happy with the pair of them."

Chris Dixon, part-owner, said: “He looks another good find. He is a nice horse and we were fairly sure when we got him. I couldn’t believe he was as cheap as he was when we did get him (23,000 Guineas).

“In a way it has gone from not looking great with him as we were well beaten first time out, which we weren’t disappointed with as we thought he would need the run, then we took him to Yarmouth and he burst through the stalls. We rushed through a stalls test to get him out quickly as he was so well in himself.

“He went to Lingfield and he won well at a massive price and we thought ‘we are back in the game’. We put him in at Beverley and we were deliberating about the ground as it had gone soft after raining. We just thought in the end let’s find something out and it turned out he loved it and he will go on anything. He doesn't need quick ground or soft ground either.

“He has got a lot of gate speed, he travels well and he stays very well. He is just a good progressive horse and David (O’Meara) has done a hell of a job with him. We were very confident after Lingfield that he will always run around a bend. He has got such tactical pace on those round tracks where you want to be handy and we don’t want to waste that and it is an advantage having that early pace.

“It is worth a few pounds being able to handle those tracks and that is why we went to Goodwood and today the race picked itself. It was either this or the Listed race and we went sensible for the handicap. He has won that off 92 so he is going to be worth a go at a Listed race if the right one is there.

“There are handicaps at the likes of Chester so he could go there and going away from tracks around the bend but one that suits early pace is Newmarket and he could be a Bunbury Cup horse which he will warrant an entry in. This is brilliant for the syndicate. We are always trying to attract people to the sport and what better than having a winner on a big day. Standing on the steps before the race the lads said can you believe we have a second favourite for a race on Oaks day. In a sense it didn’t matter where we finished as being here is the dream for them.”

Adam Kirby, who was aboard 6-1 runner-up Shelir, said: “It went very smooth. I had a lovely position and travelled very strongly. I gave up on the winner turning into the straight because I was niggling at him and the winner has obviously got a bit up his sleeve on this ground but full credit to my horse he’s toughed it out. He’s a smart handicapper.”