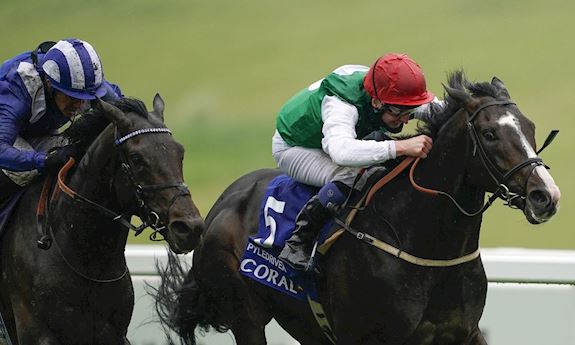 Martin Dwyer described winning the Coral Coronation Cup for his father-in-law, trainer William Muir, as a “special” moment – then revealed he had feared he might lose the ride on Pyledriver before the race had even started.

The 45 year old jockey has now won the three biggest races staged at Epsom Downs after landing the 2006 Derby on Sir Percy and the 2003 Oaks on Casual Look. However, it was a first ever Group 1 winner for Muir in a training career which has spanned 31 years.

Pyledriver was making a second appearance at Epsom Downs, after finishing 11th in last year’s Derby. The four year old son of Harbour Watch was a most tenacious winner in today’s mile and a half contest, making all the running before being briefly headed approaching the final furlong. Pyledriver then rallied gamely to regain the lead and repel the sustained challenge of 7-4 favourite Al Aasy by a neck.

Afterwards an emotional Dwyer said: “I love this place, I always have. I’ve had some great times riding here and I’ve been lucky. It’s not an easy place to ride as things can go right and wrong. I’ve watched tons of replays and videos of past races, even last night and this morning to refresh my memory as you can’t take anything for granted, but that makes it special when you win…

“Half my worry was losing the ride on him… It is not easy when you are not fashionable and you are not riding. You will have owners own a good horse like him and then it doesn’t pan out and he doesn’t win.

“The Derby was a write off and then there are always people saying, ‘why don’t you use X, Y, Z as they are riding tons of winners and why are you using him as he is not high flying at the moment?’ But that is sport and that is what happens so you have to really fight your corner.”

On Pyledriver’s performance, Dwyer added: “It was great. He really dug deep. It was a tremendous race to ride in and I’m sure it was to watch. They were two very good horses that drew clear. David (Probert) really slowed the pace up coming down the hill and with all due respect David’s horse (Highland Chief) I didn’t think he was a danger and I wanted to bag the rail. I thought if he falls back into the path of the others it will be even better.

“His first run (this season) he got very tired and needed it and was very fresh. William and his team said they were going to get him right for today and they have done the job and I did the steering.

“We always thought he would win a Group 1. He has won a couple of Group Twos and he has beaten horses that have won Group 1s. Even in the Champion Stakes he had horses like Mishriff in behind him. We are just delighted he has won his Group 1 and hopefully he can do it again.

“It is special and I got a bit emotional. Our racing has ups and downs and as a jockey if you are not fashionable it is hard to get good rides and when you do you feel like you are always defending yourself if don’t win. I suppose when I was high flying I would get on rides other jockeys would be kicked off.

“When it comes right and you win a big race you just enjoy it that bit more. I’m very excited for the rest of the season as he can only get better but the worst thing is I have to tell William he is right!

“It is a special moment Willie has waited a long time (for a Group 1). We’ve come very close and we have been beaten a short head in Group 1s and this lad has been a little bit frustrating at times. It is all down to William and Chris and the team at home. It is getting harder and harder as all the good horses are in the hands of very few trainers. The people that own him are really sporting and they are kind of the underdogs to have a go on the big day and achieve something.”

In a separate interview with Racing TV, Dwyer added: "I didn't think about the treble (Oaks, Derby, Coronation Cup) until someone said yesterday, and I'm really proud of that, because it's hard to get horses here and it's hard to get rides in these races, so to have all three on your CV - I'm proud of that. They can't take that away from me!

"Pyledriver has been frustrating at times. He's got tons of ability, as we've just seen. He got tired on his first run and William kept telling me, ‘Don't worry, I'll have him right for Epsom’. To be fair to William and Chris (Grassick, who Muir is now in a training partnership with) and the team at home, they've done what they said they'd do.

“He was too fresh at Newmarket - he was like a bottle of Coke which had been shook up - but he was a different class today, and it's all down to them.

"We were just going to give him his head and let him roll along, and if that was in front, I'd be happy in front - so I was going to try to make the running, but David [Probert, on Highland Chief] took it up and my fella was back, so I said, ok, I'll sit back in second and try to control the race from second. He settled into a nice rhythm, and with all due respect to Highland Chief, I didn't think he was a dangerous horse, so I thought I'd try to control the race from back in second place.

"You couldn't take anything from Pyledriver's run in last year's Derby, because he got flattened at the top of the hill and it was game over. But when you've got a horse who travels as well as he does, and you've been holding on to them on the bridle on this track, that's a big plus, so I was quite comfortable.

"I went past David and I wanted to have the rail, because he can wander and I wanted to keep him balanced, and then I was able to give him a nice breather. Frankie (Dettori, on Albalfora) started pressing for home without really pressing, so I was just trying to save some petrol in case I got into a real scrap, which I did in the end.

"Jim (Crowley, on Al Aasy) did actually head me - I could hear him coming, because Jim growls in a finish. He's not a dirty rider, but he was doing his best to win and gave me no room whatsoever. Jim's horse is a very good horse and it was a real ding-dong battle, and I have to say that my horse was very brave.

"He won a couple of Group 2s very well and beat horses that have gone on to win Group 1s - he ran very well in the Champion Stakes, which didn't pan out but we had Mishriff behind us. I was always confident he's win a Group 1. Fair play to all the team - there wouldn't be many trainers who drive their own horse here in the horsebox and win a Group 1, would there?!"

Winning trainer William Muir added: “I started training in 1990 and I’ve got touched of smidgens in Group 1s. Stepper Point got beat in two Group 1s by a nose, and I think it was a head, and a neck in the King’s Stand. Averti got beat in a photo finish in the Abbaye.

“I’ve never had a Group 1 winner but this is it and this is what we do it for. To get these type of horse this is why we do it. I’m lucky as we have got it and my partner Chris Grassick has only been at the job five minutes and he has got a Group One winner!

“I came here thinking I’d win. We had a meeting with the owners yesterday at the Leigh Delamere services and if you had seen us and thought we were footballers they are trying to tap this footballer up to get him to move to a different club. We were like cloak and dagger what we were going to do.

“We decided we were going to make the running and change the bridle because we thought let’s try and give him a little bit of a hand. When he went to Newmarket I was in no pains to tell everybody that he was not going to Newmarket 100 per cent.

“Today is the day I wanted to win a Group 1 and so it proved. He was very brave but he is brave. Don’t get me wrong, if you watch him from the outside you could think ‘why does he wander, why does he do that?’ That is in his make-up - I don’t know why he does it. He never does it at home.

“The plan has been mapped out all year. The Jockey Club Stakes, Coronation Cup, Hardwicke and King George. I suspect if we go to those two races and Mogul is in them he will be favourite as we’ve only met him three times and been in front three times but he will still be favourite.

“I did say to Pat (Keating) and Aidan (O’Brien) and they are champions that if you trained Pyledriver he would be favourite.”

Askked if the Prox de l’Arc de Triomphe might be on the cards this season, Muir added: “I should think - why not? If we are allowed to go, with COVID, then why not?”

Trainer William Haggas, who was responsible for runner-up Al Aasy, the 7-4 favourite, said: "He came to win and didn't win. I'm disappointed he was beaten, but it would be very hard to suggest it was lack of resolution. He's only a Group 3 winner and he's run a very good race to be beaten onlya neck in a Group 1.  He's got more to offer I feel."

Aidan O’Brien, who saddled third home Japan (100-30) and sixth Mogul (13-2) added: “They ran well. The ground just turned for both of them, but they ran well. Japan handles it better than Mogul but neither of them like it really. We haven’t thought about where they will head just yet.”