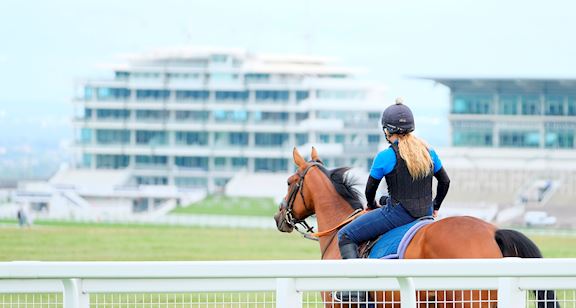 Jockey Martin Dwyer believes Pyledriver can make amends for last year’s frustrating run in The Derby by rewarding connections with a Group One victory on his return to Epsom Downs on Friday in the Coral Coronation Cup.

Last season the William Muir and Chris Grassick-trained Harbour Watch colt was one of the leading British contenders for the premier Classic, which was staged in July due to Coronavirus, following an impressive victory in the Group Two King Edward VII Stakes at Royal Ascot.

Dreams of securing a fairytale result for all involved failed to materialise after early interference saw Pyledriver lose his position and shuffled to the rear of the field, placing him firmly on the back foot and into a position he would ultimately be unable to recover from, eventually finishing 11th of the 16 runners behind runaway winner Serpentine.

With Pyledriver finding only Sir Ron Priestley too strong on his return in the Group Two Jockey Club Stakes at Newmarket last month, Dwyer is confident that with a bit of luck on his side he can claim the top level triumph he feels his talents deserve.

Dwyer said: “It was strange circumstances and a strange Derby last year with the way it was run. As it happened he got flattened at the top of the hill and my race was over.

“Unfortunately, I ended up at the back of the field and the winner got it all his own way up the front and we never got near him. We had to sit and suffer and play the hand we were dealt. It was disappointing for all of us but we just had to put a line through it and move on.

“He didn’t do anything wrong and you couldn’t say he didn’t handle the track, the race just didn’t go to plan. He is a well-balanced horse and he travels really strongly. He has got a high cruising speed which is what you need for Epsom.

“I think he definitely deserves it and the owners do too as they are really nice people. The whole team deserves to have a Group One winner.

“He has been written off a couple of times and overlooked but on his day he is very good. If you look at some of the horses that have finished behind them they have come out and won Group One races. He is more than capable, we just need everything to go right on the day so let’s hope it’s at Epsom.”

Pyledriver secured further Group Two glory last year in the Great Voltigeur Stakes at York, before finishing third in the St Leger at Doncaster and down the field in the QIPCO Champion Stakes at Ascot on his final start.

And although he tasted defeat on his return this season, Dywer expects that run to put him spot on for his next assignment.

He continued: “He ran a good solid race but he just needed the run as it was his first run of the year. It is always difficult taking on Mark Johnston’s horses at the best of times but Sir Ron Priestley had already had a run and he was match fit and my horse just needed it.

“There should be more to come as he will have improved for the run as William trained him to use that race as a stepping stone for him to be at his very best at Epsom.

“He probably lost a bit of his strength at the end of his three year old career on that heavy ground at Ascot on Champions Day.

“He looked like a teenager then but he looks like a man now, so fingers crossed we are going to have a good year for him.

“It would be great to win a Group One for William, and obviously Chris now. It has just eluded us as we have never won a Group One together as we were a bit unlucky with Stepper Point in the past.”

This year marks the 15th anniversary of Dwyer steering the Marcus Tregoning-trained Sir Percy to victory in The Derby, and though the father of two has enjoyed plenty of other notable triumphs since, it is a success and experience that he will never forget.

He said: “Some great jockeys never win a Derby so I’m lucky enough to have done that. I’ve had two Classic winners at Epsom as I won the Oaks on Casual Look in 2003, so I’ve been lucky there.

“It is a brilliant feeling when it goes right at Epsom and that is what makes winning there special as there are so many things that can go wrong more than any other track you will ride on.

“When it all comes right and you win the big race on the big day and you come into that winner’s enclosure on your own, it just feels like you have achieved something.

“You are surrounded on all sides and the stands are full, though they won’t be this year, it is still a special feeling. As a jockey you know how hard it is for everything to come right.

“I might look back at the Sir Percy race if it flashes up on something. If I’m having a bad run I think I’ll look back to see if I get beat as if I watch it back I might get beat half a length!

“It is one thing that whatever happens in your career they can’t take it away from you once you have done it.”

Twenty four hours before teaming up with Pyledriver, the lifelong Everton FC fan will be on hand to help conduct the draw for this year’s Cazoo Derby, which he believes the Aidan O’Brien-trained ante-post favourite Bolshoi Ballet will take all the beating in.

He said: “I thought it was a wind up when they asked me to do it but it is an honour to be asked and I’m looking forward to it.

“It’s hard to get away from Bolshoi Ballet as I think he has been very impressive. That last performance at Leopardstown he just looked good.

“He looks to have the right set-up for Epsom. He has got a great attitude, great balance and he won that race at Leopardstown looking like he had plenty of petrol left in the tank.

“At a bigger price I think Andrew Balding’s horse, Youth Spirit, has a chance. I liked his attitude at Chester. I thought he could be a little bit of a dark horse.”