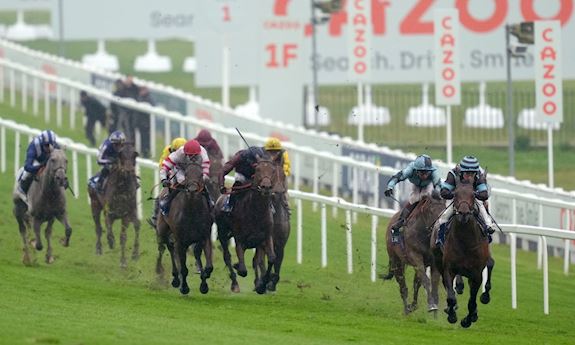 Course specialist Corazon Espinado made it win number four at Epsom Downs when taking the Coral ‘Beaten A Length’ Free Bet Handicap over an extended mile.

The six year old Iffraaj horse, returned at 12-1, was always in a prominent position and scored by three and a half lengths under Hollie Doyle.

Trainer Simon Dow, who is based locally in Epsom, said: “The stable’s only across the road so he’s probably the first one to not get wet! He’s incredible. He’s a little track biased – he loves Lingfield and he loves Epsom, although he has won away.

“It’s a tremendous achievement for a little horse to win two years on Oaks Day. He won the concluding seven furlong handicap the first year it was run and this is a regular mile handicap here on Oaks Day and it’s really exciting for us.

“Everything was against us. It was easing ground and Luke Morris was going to ride him because he’s been the regular rider on him over the years. We talked about which race would suit him better and we thought about maybe the big field in the seven furlong, he gets a wide draw and you’ve got no chance so we thought we’d have a go over the mile and it looked like being a smaller field and we still get drawn on the outside. The horse is very, very well and he’s in great nick but we were still a little cautious.”

Asked about the ride Hollie Doyle gave him, Dow replied: “There aren’t enough superlatives for Hollie. She’s ridden winners for us consistently over the years and it’s always a privilege to have her.

“The one thing we said was that given the unusual conditions of the track it gives us an advantage in that wherever you are in the race you want to use him down the hill, because there will be plenty in behind him who will be getting unbalanced and he goes round there like he’s on rails.

“We’ll come back here whenever there’s a race for him. He’s just one of those horses. He’s won £150,000 in prize money, he comes from a great family, is by a great sire and I’m sure he’s going to go on and win more races – he’s not finished yet.”

Winning jockey Hollie Doyle added: "He's a horse who clearly likes the track, having won here three times before. I jumped off well. Simon (Dow) said I could make it, or just sit where I could.

“This was probably his maximum trip today, so I didn't want to make too much of him. I was just trying to hold him as long as I could and luckily enough he really got into the race so I could just through the motions from then on, without having to put too much pressure on.

"It's wet ground, and the rain is just starting to get into it now."

Oisin Murphy, who was on-board 12-1 runner-up Hortzadar due to Adam Kirby being stuck in traffic, said: “He ran very well. We didn’t go super hard and I thought Hollie (Doyle) rode a really good race on the winner. It’s hard to make up ground when the rail is out like that, but he kept going. He’s a great spare to pick up - he tries hard and is a super ride.”

John Best, trainer of third-placed Plantadream (20-1), reported: "Ben (Curtis) got his agent to phone for the ride at the start of the week, having ridden him at Newbury when the ground was too soft, so he was really disappointed when he arrived.

“He's run a cracker, because he just wasn't travelling and never went an inch in the first part of the race. We'll try to campaign him in more of these decent handicaps on faster ground and see how we go."