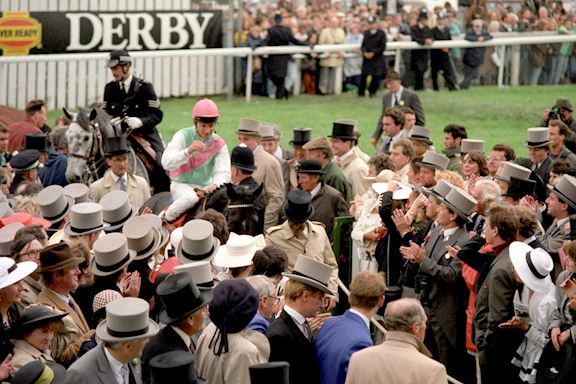 George Eddery has been watching videos of his legendary uncle Pat winning the world famous Derby at Epsom Downs as he bids to emulate his success by triumphing in the amateur version today (Monday).

As a youngster the now-22 year old had dreamed of being a professional footballer and scoring the winner for his beloved Chelsea FC in the FA Cup final at Wembley.

And although those dreams never materialised, he admits it would be the “highlight of his career” if he could follow in the footsteps of his late uncle by celebrating victory at Epsom Downs in the Amateurs’ Derby Handicap.

The iconic Surrey racecourse was a happy hunting ground for Pat Eddery during his glittering career, winning both the Derby and Oaks on three occasions and also lifting the Coronation Cup six times before his retirement from the saddle in 2003.

Using his uncle’s achievements as inspiration George now hopes he can maintain the family’s proud record at the track by enjoying his own centre stage moment aboard Hotspur Harry, who is trained by his father Robert Eddery.

It will be George’s third appearance in the race and he said: “A lot of Pat’s big wins were before my time but I’ve watched the videos back and his win on Dancing Brave in the 1986 Arc was one of the greatest rides we have ever seen.

“I’ve watched plenty of his Derby wins back and he rode Epsom as good as anyone and him and Lester Piggott were the main men around Epsom.

“He is a great man to look up to as an idol. Hopefully I can just get to the day, ride like any other race and see how we get on.

“It would be great for me and great for my dad if a father and son combination could win it and it would be the best win I’ve had so far.

“I’ve only had six winners and it would be the highlight of my career so far if Hotspur Harry was to get his head in front.”

Had it not been for keeping loyal to his first ever winner under rules, Country ‘N’ Western, in the 2018 renewal of the race then George may have had a completely different story to tell.

He said: “The first time I rode in the race was in 2018 aboard Country ‘N’ Western, who was with David Elsworth at the time.

“I had my first winner around Catterick on him the race before on what was my fourth ride. He ran well enough and gave me a good run around. It was great to have the experience of riding around such a prestigious track.

“Peter Chapple Hyam wanted me to ride his horse Medalla De Oro that year but it was only a few weeks before that that I had won on Country ‘N’ Western so I decided to stick with him.

“Medalla De Oro ended up winning the race under Finian Maguire so it ended up coming to bite me on the bum! But that is racing and that’s the way it goes.”

Despite the Eddery family’s deep-rooted association with racing, it was not actually until he was a teenager that he decided a career in the sport was for him.

He added: “As a young kid I never had an interest in racing. I was mad keen on football and had a big interest in Chelsea and always wanted to be a professional footballer.

“I used to play football for my local club in Tring and I started off there at five and played all the way until I was 16. I played for a decent school team but I couldn’t break into playing at a higher level.

“When I was 14 and I came to terms with the fact that I wasn’t good enough to make it as a professional footballer I decided to give the racing game a go, given my dad and the family have been a big name in the sport for years.

“I went to the British Racing School and booked on the Flexible Learning Programme, which is a two year course where you have one day off school a week to go down there.

“When I went to the Racing School at 14 I loved it and now I couldn’t see myself doing anything else. Working in racing is something I’m delighted to do.”

After his brief time working under the watchful eye of his father, George enjoyed spells working for Marco Botti and David Elsworth, the man he credits for helping him take up race riding.

He said: “Mr Elsworth was the person that I got my amateur license out for. He pushed me to get it as he was a big supporter of mine.

“When I first started training he would phone up other trainers to try and get me spare rides in races and he would put me up whenever I could.

“You have got to look at Mr Elsworth as being one of the greatest dual purpose trainers there has ever been.

“He has trained top class horses like Desert Orchid and Arabian Queen and it was nice having him there. If someone of his calibre has faith in you then you must be doing something right.”

Attempting to win one of the most prestigious races there is for male amateur riders might be the primary focus for George at the moment, however he has one major long term goal he would like to accomplish in the saddle.

He added: “I’d love to be champion amateur jockey. I’ve seen some years that six or seven winners is enough to win the title.

“Picking up spare rides is tricky as a lot of trainers have their own amateurs and that is what you need to do to become champion amateur. It would be great if I could go on and achieve it.”

As for his current assignment, the Newmarket-based rider believes Hotspur Harry, who finished seventh on his debut behind 2020 Derby winner Serpentine when trained by Joseph O’Brien, has every chance of victory if seeing out the trip and taking to the first time blinkers.

He said: “As he has run more and more for dad he is a horse that we have come to figure out needs to be produced very late and he can hit the front too soon.

“He has got first time blinkers as well on Monday - he normally runs in cheek-pieces but we have replaced them with the blinkers just to help him concentrate.

“He has been running well and his last run at Newmarket was good. He was the last one off the bridle and looked the winner. But then he looked like he hit a flat spot and then stayed on strong again near the line.

“On his runs on grass over a mile and a quarter he has hit the line strongly and we are hopeful he will get the mile and a half around Epsom.”