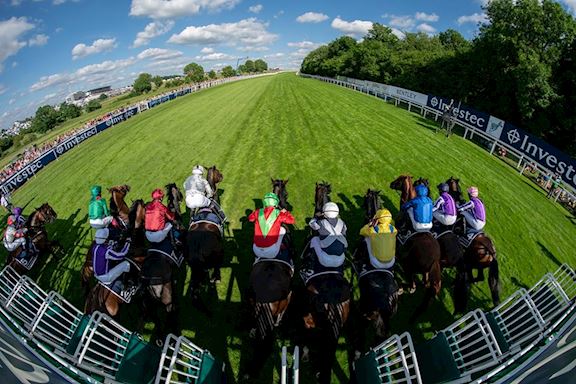 Group One winners Gleneagles, Elm Park and Epicuris headline 12 second entries for the £1.325-million Investec Derby at Epsom Downs on Saturday, June 6, which are announced today.

The cost to make a second entry to Britain's richest race was £8,000 and the additions mean there are now 110 horses remaining engaged in the premier Classic race, which is staged over a mile and a half at Epsom Downs.

Gleneagles (trained by Aidan O'Brien IRE & owned by a Coolmore partnership) captured the seven-furlong Vincent O'Brien National Stakes at the Curragh in September and the colt by Galileo, who won the Investec Derby in 2001, is the ante-post favourite for the first British Classic, the mile QIPCO 2000 Guineas at Newmarket on May 2.

Epicuris (Criquette Head-Maarek FR/Khalid Abdullah), one of three French-trained contenders among the 12 second entries, capped an unbeaten three-outing juvenile campaign when making all in the 10-furlong Criterium de Saint-Cloud in November but met defeat on his reappearance.

Andre Fabre has added Grey Lion, a Galileo colt who is a full-brother to dual Classic heroine Golden Lilac and unbeaten in two starts for Gestut Ammerland.

Migwar, representing another French trainer Freddy Head, is also yet to taste defeat in two appearances. The son of 2009 Investec Derby hero Sea The Stars annexed a nine-furlong maiden at Longchamp in October and caught the eye on his reappearance when taking a 10-furlong conditions race by five lengths at Saint-Cloud on March 7. He is owned by Sheikh Abdulla Bin Khalifa Al Thani.

Head, yet to saddle a runner in the Investec Derby, said: "Migwar is a horse I like and he has come out of Saint-Cloud very well.

"I want to run him in the Prix Greffulhe (Saint-Cloud, May 5), providing everything goes well, and we will see how he gets on there before making a decision about the Investec Derby. He is a good horse and, although he hasn't beaten much, he has won very easily both times on ground that would not have been ideal.

"I wanted to have the option of Epsom because he stays well and a mile and a half will be his trip, whereas the Prix Du Jockey Club (the French Derby run over an extended 10 furlongs) might be a bit short. At this stage, I would be favouring Epsom over Chantilly."

Other second entries include Moheet (Richard Hannon/Al Shaqab Racing), who cost 800,000 guineas at the breeze-up sales last spring and was a seven-length winner on his debut at Salisbury in October, plus Kempton Park victor Balios (David Simcock/Al Asayl Bloodstock).