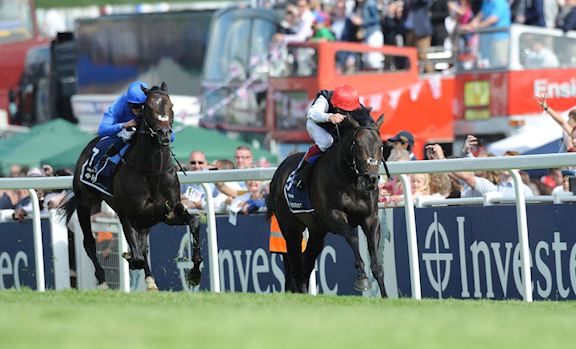 The countdown to the 2016 Investec Derby steps up a gear today as 136 horses go forward for Britain's premier Classic and richest race, run at Epsom Downs on Saturday, June 4.

The March 1 scratchings deadline, details of which are revealed today, was the first stage since the initial yearling entry in December, 2014. The total of 136 entries remaining is well up on the 102 three-year-olds left in the Investec Derby at the same stage last year. A maximum field of 20 can line up on Saturday, June 4.

The prize fund for the 2016 Investec Derby, which is run over one mile, four furlongs and 10 yards, will be at least £1.325 million. Sharing 12/1 favouritism with Coral, official betting partner of the Investec Derby Festival, are Foundation (John Gosden) and Midterm (Sir Michael Stoute).

Foundation, owned by Highclere Thoroughbred Racing's Wellington syndicate, won on his first three starts last year, including the Group Two Juddmonte Royal Lodge Stakes at Newmarket, before finishing third in the Group One Racing Post Trophy at Doncaster when denied a clear run in the last quarter-mile. Midterm is by 2001 Investec Derby hero Galileo and the first foal of six-time Group One heroine Midday, who finished the head runner-up in the 2009 Investec Oaks. Owned by Khalid Abdullah, who has enjoyed success three times in the Investec Derby, Midterm was the comfortable winner of a mile maiden at Newbury in October on his only outing in 2015.

Master French trainer Andre Fabre landed the 2011 Investec Derby with Pour Moi and his one entry going forward in 2016 is unbeaten Ultra (16/1 with Coral), a Group One winner last year in the Prix Jean-Luc Lagardere at Longchamp. Also on the 16/1 mark with Coral is the Hamdan Al Maktoum-owned Wajeez (John Gosden), an eye-catching seven-length winner on his only start at Nottingham in November. Ultra is owned by Godolphin, the Maktoum family's racing operation, which has 14 three-year-olds going forward. Also among the Godolphin contingent are impressive Group Two Champagne Stakes hero Emotionless (Charlie Appleby, 20/1) and Moonlight Magic (Jim Bolger, 20/1), a son of Cape Cross from the outstanding Urban Sea family, who won both his starts in Ireland last season. Ireland's champion Flat trainer Aidan O'Brien has won three of the last four renewals of the Investec Derby and five in total. O'Brien has more horses at this stage than any other handler, with 36 contenders in total. These include Racing Post Trophy runner-up and subsequent Group One Criterium International winner Johannes Vermeer (25/1), impressive maiden winners Cook Islands (25/1) and Idaho (25/1), plus unraced colts who could make their mark as the 2016 Flat season gets underway.

As well as the O'Brien-trained horses, owners Sue Magnier, Michael Tabor and Derrick Smith also have an interesting contender in Royal Artillery (John Gosden, 20/1), who was successful in a maiden at Doncaster in October. Saleh Al Homaizi and Imad Al Sagar saw their colours carried to Derby victory by Authorized and Frankie Dettori in 2007. The pair have two colts going forward this year, headed by Mr Khalid who is from the first crop of 2011 Investec Derby hero Pour Moi. Trained by Marco Botti, Mr Khalid was third on his debut at Lingfield Park in September before making all for an impressive seven-length success in a maiden at Nottingham in October.

Botti said: "I am very pleased with Mr Khalid. He has wintered really well and looks a different horse to last year - he is much stronger and more furnished.

"I thought he ran well first time out on a track that was probably too sharp for him. He then got his ideal conditions at Nottingham - a stiff mile with an ease in the ground - and was really quite impressive. It was encouraging but the form of some of them backend maidens can be questionable.

"He is coming along nicely at the moment. He is bred to make a much better three-year-old and we are looking forward to getting him out in the spring. We have no plans set in stone for him as things stand, although he could be on nice handicap mark (85). He is one of our three-year-olds that we hold in high regard and we hope that he will progress all through the year."

The Investec Derby has a second-entry stage on April 5, when horses can be added to the line-up at a cost of £8,000. The second and final scratching deadline is on May 20, following the conclusion of the Derby trials. The five-day confirmation stage is on Monday, May 30, when there is a final chance for horses to be added to the field at the £75,000 supplementary entry stage.

Epsom Downs Racecourse is situated on the North Downs in Surrey, just 15 miles from central London. Epsom is a historic training centre and home to a significant number of racing stables. The racecourse is the venue for the greatest Flat race in the world, the Group One Investec Derby, which takes place on the first Saturday in June every year.

With a history dating back to 1780, the roll of honour for the premier British Classic is studded with the names of the greatest horses to have graced the English turf. The Investec Derby Festival also features the Investec Oaks and the Investec Coronation Cup, both also run over the Derby course of one mile, four furlongs and 10 yards, for fillies and older horses respectively. The Investec Derby and Investec Oaks, two of the five British Classics, are for three-year-olds, with the former open to colts and fillies and the latter to fillies.

Epsom Downs Racecourse is part of The Jockey Club, which has been at the heart of British racing for more than 260 years. Today the largest commercial group in the sport, The Jockey Club runs the largest racecourse group in the UK by turnover (2014: £162.9m), courses (15) including those at Aintree, Cheltenham, Epsom Downs and Newmarket, attendances (2015: 1.95m), total prize money (2015: £43.9m), contribution to prize money (2015: £19.9m) and quality racing (Group and Graded races); more than 3,000 acres of world-class training grounds in Newmarket, Lambourn and Epsom Downs; The National Stud breeding enterprise and education provider; and the charity for racing's people in need, Racing Welfare.

Governed by Royal Charter, every penny The Jockey Club makes it puts back into British racing.