Clare Balding, one of the UK's most prominent sport broadcasters and journalists, has been appointed by The Jockey Club as a racecourse committee director at its Epsom Downs Racecourse – home of The Investec Derby Festival.

Balding has presented terrestrial horseracing coverage for both Channel 4 and the BBC, and was awarded an OBE for her services to broadcasting and journalism in 2013, as well as a BAFTA for her coverage of the London 2012 Olympic and Paralympic Games. She hosts a weekly BBC Radio 2 show and is a bestselling author.

Balding is part of a horseracing dynasty; her father, Ian Balding, trained the great Derby-winner Mill Reef and her younger brother, Andrew, followed in his father's footsteps saddling winners across the globe, including the 2003 Oaks winner, Casual Look. Balding herself was a leading amateur flat jockey and Champion Lady Rider in 1990, before graduating from Cambridge University in 1993 and embarking on a career in journalism.

She joins a committee whose chairman is Julia Budd, the founding partner of The Zygos Partnership, the Board search firm. Budd was appointed to The Jockey Club’s main Board of Stewards in 2012 and succeeded Anthony Cane as Epsom Downs Racecourse’s chairman at the end of this year’s Investec Derby Festival.

Balding takes up her new non-executive role at Epsom Downs Racecourse with immediate effect. The racecourse’s next fixture, The Investec Spring Meeting, featuring an Investec ‘automatcic entry’ Derby Trial, is on 26 April 2017.

“Mill Reef won the Derby in the year I was born and because of that, I have always felt a close affinity with Epsom. Having reported for 5 Live and presented for both the BBC and Channel 4, my involvement with the media coverage of the Investec Derby Festival goes back twenty years and I'm thrilled to now have the chance to work with the Epsom team in a different capacity. I can't wait to help the team in any way possible, especially with the most famous flat race in the world as it's hugely important to the whole sport and also to the international profile of British racing.”

“We are really delighted that Clare is joining us at Epsom Downs. She will bring a wealth of racing knowledge, passion and insight to the committee. I am sure she will prove a tremendous asset to Jockey Club Racecourses generally and Clare’s new role will allow her to continue to contribute to the sport she loves.”

Epsom Downs stages 11 Flat fixtures in 2017, including the world’s greatest flat race, the Investec Derby, The Investec Oaks and Investec Coronation Cup. The racecourse also operates as a busy conference and events venue. It is part of The Jockey Club, which turns over more than £150m annually through its 15 racecourses, including those at Aintree, Cheltenham, and Newmarket; more than 3,000 acres of world-class training grounds; property portfolio, including the historic Jockey Club Rooms; and The National Stud. 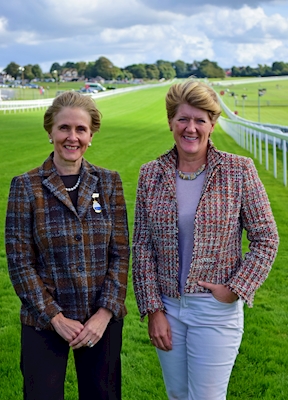 2. Epsom Downs Racecourse in Surrey has been a venue for the sport of horse racing since the 17th Century, with the first running of the Oaks taking place in 1779 and the Derby a year later. Since that time the Investec Derby has developed into the World’s Greatest Flat Race and is now part of the unique and vibrant Investec Derby Festival.

3. Epsom Downs Racecourse is part of The Jockey Club, which has been at the heart of British racing for more than 260 years. Today the largest commercial group in the sport, The Jockey Club runs the leading racecourse group in the UK by turnover (2015: £174.2m), attendances (2015: 1.95m), total prize money (2015: £43.9m), contribution to prize money (2015: £19.9m) and quality racing (Group and Graded races); more than 3,000 acres of world-class training grounds in Newmarket, Lambourn and Epsom Downs; The National Stud breeding enterprise and education provider; and the charity for racing's people in need, Racing Welfare. Governed by Royal Charter, every penny The Jockey Club makes it puts back into British racing.