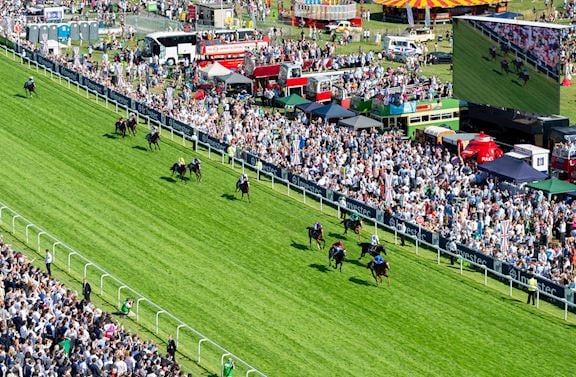 Mehdaayih has been added to the 12-furlong fillies' Classic at a cost of £30,000 after a scintillating four and a half-length victory in the Listed Cheshire Oaks on May 8. The Frankel filly is the 9/4 favourite with Unibet, official betting partner of the Investec Derby Festival.

Mehdaayih's trainer John Gosden is also responsible for another impressive trial scorer in Anapurna (7/1), who defeated Tauteke (33/1, Roger Varian) by six lengths in the Listed Lingfield Oaks Trial on May 11.

Gosden is chasing a third Investec Oaks success, having landed the Classic with Taghrooda (2014) and superstar Enable (2017).

A half-sister to 2018 G1 Irish Derby victor Latrobe, Pink Dogwood returned to action with a smooth success in the Listed Salsabil Stakes at Navan on April 28.

Further Irish interest could be provided by Tarnawa (16/1, Dermot Weld), winner of the G3 Blue Wind Stakes at Naas on May 11, and last season's G1 Fillies' Mile scorer Iridessa (16/1, Joseph O'Brien), who has also been declared for the Irish 1,000 Guineas.

Newmarket trainer William Haggas has two leading contenders in Maqsad (7/1) and Frankellina (14/1). Maqsad has won twice at Newmarket this year, most recently taking the Listed Pretty Polly Stakes by five lengths on May 5, while Frankellina shaped well on her reappearance when going down by a neck in the G3 Musidora Stakes at York on May 15.

Ralph Beckett is a dual Investec Oaks-winning trainer, courtesy of Look Here (2008) and Talent (2013), and the Andover handler is set to be represented by Manuela De Vega (14/1).

Unbeaten as a two-year-old, including a Listed contest against colts at Pontefract in October, the Lope De Vega filly shaped well on her comeback when second behind Mehdaayih at Chester.

Beckett reported: "Manuela De Vega is in good form and we have been pleased with her preparation for the Investec Oaks.

"She did a piece of work Tuesday morning on the grass which was nice and the Oaks remains the plan.

"I was really pleased with her run at Chester. She had to give a penalty away and the winner got first run on us. She ran well and she will improve from that effort.

"She needed that run and it would also have done her the world of good to go round Chester and race in between fillies.

"Hopefully, we will be competitive at Epsom. We have been lucky enough to win the Oaks twice and we are looking forward to running Manuela De Vega on Friday."

Further G1 action on Investec Ladies' Day is provided by the £444,750 Investec Coronation Cup, which has 14 contenders at the six-day stage following the addition of Old Persian (Charlie Appleby), who was supplemented today at a cost of £25,000.

The four-year-old Godolphin colt, 3/1 second-favourite with Unibet, produced one of the best middle-distances performances in the world so far this year when the comfortable winner of the G1 Dubai Sheema Classic at Meydan, Dubai, at the end of March.

Charlie Appleby commented this afternoon: "Old Persian worked well this morning and, with the way the Coronation Cup is shaping up, we felt that he deserved to be in the line-up."He has come out of his victory in the Dubai Sheema Classic in good form and a reproduction of that effort is going to make him very competitive.

"He is a typical Dubawi colt, who is looking the finished article as a four-year-old, and we saw out in Dubai how well he travels through his races, which will hopefully serve him well around Epsom."

Aidan O'Brien is the most successful trainer in the Investec Coronation Cup with eight victories and his five contenders this year include Kew Gardens, who is Unibet's 2/1 favourite.

The four-year-old was a dual G1 winner last season, including the final Classic, the St Leger. at Doncaster, and finished second to Morando (10/1, Andrew Balding) on his seasonal return in the G3 Ormonde Stakes at Chester on May 9.

The last two winners of the G2 Middleton Stakes, Lah Ti Dar (4/1) and Coronet (12/1), could represent Gosden, while Yorkshire-based trainer Mark Johnston has two contenders as well in Communique (20/1) and Mildenberger (33/1) who were first and third in the G2 Jockey Club Stakes at Newmarket on May 4.

Salouen (8/1, Sylvester Kirk) was beaten a head by Cracksman in the 2018 Investec Coronation Cup and the five-year-old is set to return to Epsom Downs as he bids for a first G1 success.

Group 1, £523,750 total prize fund. 1m 4f 6y, 4.30pm, Epsom Downs, Friday, May 31. For three-year-old fillies only. Horses will only be eligible to run provided they have attained a BHA rating of 80 or higher. Horses who do not qualify for a rating may also be eligible providing the BHA Handicapper is satisfied that the horse's racecourse performances up to and including the day before confirmation merit a provisional assessment of 80 or more. Horses who have not run will not be eligible. Entries closed April 9, entries revealed April 10 (60 entries), scratchings deadline May 16 (22 remained), six-day confirmations & £30,000 supplementary stage May 25 (15 confirmations plus 1 supplementary entry - Mehdaayih), final declarations 10am May 29.

Group 1, £444,750 total prize fund. 1m 4f 6y, 3.10pm, Epsom Downs, Friday, May 31. For four-year-olds and upwards; Weights: colts and geldings 9st, fillies 8st 11lb. Horses will only be eligible to run provided they have attained a BHA rating of 80 or higher. Horses who do not qualify for a rating may also be eligible providing the BHA Handicapper is satisfied that the horse's racecourse performances up to and including the day before confirmation merit a provisional assessment of 80 or more. Horses who have not run will not be eligible. Entries closed April 9, entries revealed April 10 (26 entries), scratchings deadline May 14 (18 remained), six-day confirmations & £25,000 supplementary stage May 25 (13 confirmations plus 1 supplementary entry - Old Persian), final declarations 10am May 29.