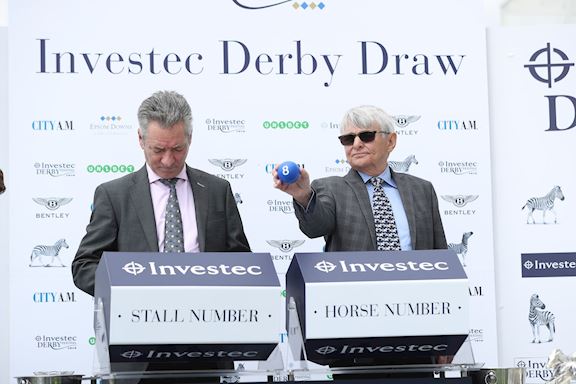 The scene at Epsom Downs today
INVESTEC DERBY DRAW
In its second year, the Investec Derby draw for stall positions in Britain's premier Classic and richest race the £1.625 million Investec Derby, took place in the historic winners enclosure in front of the Queen's Stand. Drawing the allocations were Michael Hills (stalls), Derby winner in 1996 on Shaamit, and Willie Carson (horses) who took the prize four times with Troy (1979), Henbit (1980), Nashwan (1989), andErhaab (1994).
The ceremony was hosted live on Racing TV by Tom Stanley.
Carson commented after the draw ceremony: "Low numbers are the ones that have to do that bit of extra work early on. It is not as bad as when they put the stalls on the inside of the track, but it is still a little bit steeper in the first furlong and a half on the inside.
"They always put the stalls down on the inside rail in my day.
"Telecaster (trained by Hughie Morrison), was drawn 2... there has never ever been a winner out of stall 2. That was a bad call from me. Hughie will be spitting blood. But history is there to be made.
"It all depends on the horse. If you are riding a horse that wants to be up there, you want to be drawn high. If you are on a horse that is going to be held up, a lower draw doesn't matter because you are there and you just accept where you are.
"Broome (drawn 8) was always my long-term one, because I knew that he would stay a mile and a half. That is the most important thing in a horse that is going to win the Derby.
"The Chester winner, Sir Dragonet (drawn 13), although it was soft ground, it was the manner of his win (Dee Stakes, 1m 4½ furlongs) that caught the eye.
"He sat last - did they go too fast? I don't think so. He gave the impression that he was a horse that was improving at a very quick rate when he came through to win. So I think Sir Dragonet might be the one.
"It is down to the human factor then, they have made your mind up for you having the stalls in the middle, if you are drawn in the middle. If you are drawn high, you can stay or go, the same if you are drawn low.
"Nobody ever takes a pull in the Derby, you either push or accept where you are."

HILLS REMEMBERS HIS DERBY WIN EVERY DAY
Michael Hills was one of two Investec Derby-winning jockeys present today for the official Investec Derby Draw on the eve of the Investec Derby Festival, along with Willie Carson.
Hills' family are steeped in racing history - his trainer father, Barry Hills, won five British Classic races, although never at Epsom, and his brother Charlie recently trained Phoenix Of Spain to win the Irish 2,000 Guineas. His twin brother Richard was also a highly successful jockey, winning the 2005 Investec Oaks aboard Eswarah.
Hills' victory in the 1996 Investec Derby on the William Haggas-trained Shaamit was his sole Epsom Classic winner, but his other Group One triumphs included the likes of Pentire in the 1996 King George VI & Queen Elizabeth Stakes. The 56-year-old is now a jockey coach and syndicate manager.
He said: "My earliest memory of Investec Derby is when my father [Barry] had a runner in the 1972 race, Rheingold. He got beat a short-head by Roberto [trained by Vincent O'Brien], and it was such a close finish that it took half an hour or something for the result to be announced. I was on the way back from school, and I just remember being gutted!"
Hills enjoyed 14 rides in the world's premier Classic between 1985 and 2006.
He remembered: "My first ride in the Derby was in 1985 - Royal Harmony, for my father. He was 40/1 and I just had a nice ride round; I didn't get anywhere near the front.
"On my third ride in the race, in 1988, I was second on Glacial Storm, trained by my father, to Kahyasi - my old mate Ray Cochrane beat me. That was my first 'I could do this one day - I want to do it!' moment."
Shaamit came along in 1996.
Hills said: "He had quite a lot of problems prior to the Derby - he missed the Dante because he had ringworm, so we had to bypass it and go straight for the Derby. But we managed to get him here to Epsom and William Haggas, who trained him, did incredibly well. He was just a very, very good horse. A terrific horse, and on that day he was unbelievable."
Asked if he can remember the feeling of winning the Investec Derby, Hills said with a laugh: "I remember it every day! You don't often get a feeling like that.
"There were 20 runners and it was hard getting through the race without getting knocked about, because Shaamit had so little experience. I managed to glide him through the race. I remember talking to Lester [Piggott, who took the Investec Derby nine times] beforehand and he said, 'save the horse for the straight'. I tried to save as much energy as I could for the straight, and when I showed him some daylight going to the three-furlong marker, he just took my hands and away we went. I will never forget it. You hear the crowd, and you hear your name being shouted on the tannoy. I just put my head down and rode as hard as I could.
"After the Derby, you are waiting for the next two-year-old that you think might be the next Derby horse - it goes on and on. You've got to be here for the Derby. It's such an exciting race because it is so early on in a horse's career that it is so open. Any of the 13 runners on Saturday can win it."
Asked what he fancies in this year's Investec Derby, Hills replied: "I'd love to see Bangkok [an 8/1 chance for trainer Andrew Balding and jockey Silvestre de Sousa] win this year. Andrew Balding is a terrific trainer and I'd love to see him win it. Aidan [O'Brien, who has won the race six times] has got a pretty strong team with seven in it; I think it is a very strong race, as it should be."
13 declared runners for the 2019 Investec Derby
Group 1, £1,625,000 total prize fund. Epsom Downs, 4.30pm, Saturday, June 1, 2019, 1m 4f 6y. For three-year-old colts (9st) and fillies (8st 11lb). Horses will only be eligible to run provided they have attained a BHA rating of 80 or higher. Horses who do not qualify for a rating may also be eligible providing the BHA Handicapper is satisfied that the horse's racecourse performances up to and including the day before confirmation merit a provisional assessment of 80 or more. Horses who have not run will not be eligible. Entries closed December 5, 2017, first scratchings deadline March 5 (96 remained), second entries deadline April 2 (14 second entries), second scratchings deadline noon May 21 (18 remain), five-day confirmations & £85,000 supplementary stage May 27 (13 remain & two supplementary entries, Sir Dragonet & Telecaster - 15 go forward), final declarations May 30 (13 declared runners).
13 declared runners
8 Irish-trained
Cape Of Good Hope & Surfman were taken out of the Investec Derby this morning