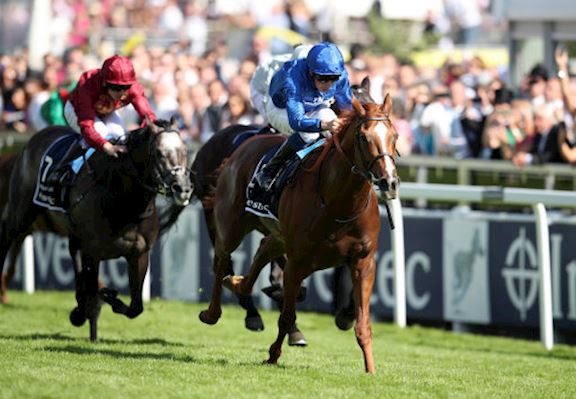 INVESTEC DERBY FACTS 2019
AIDAN O'BRIEN: INVESTEC DERBY FACTS
*If Aidan O'Brien wins Saturday's Investec Derby for a seventh time, he will join John Porter, Robert Robson and Fred Darling as the most successful trainers in the race's 240-year history.
*O'Brien has seven runners in the world's premier Classic (Anthony Van Dyck, Broome, Circus Maximus, Japan, Norway, Sir Dragonet and Sovereign). In 2007 he ran eight horses - and his highest placed finisher was Eagle Mountain, who finished second to Authorized.
*O'Brien could become the first trainer to send out the first three horses home in the Investec Derby. Twelve trainers have saddled the first and second horses in the Derby, most recently O'Brien in 2017 (Wings Of Eagles and Cliffs Of Moher), his second one-two following High Chaparral and Hawk Wing in 2002.
*There have been 12 Investec Derby winners sent out from the famous Ballydoyle Stables in Co Tipperary. Vincent O'Brien saddled Golden Fleece (1982), The Minstrel (1977), Roberto (1972), Nijinsky (1970), Sir Ivor (1968) and Larkspur (1962). The unrelated Aidan O'Brien has so far scored with Wings Of Eagles (2017), Australia (2014), Ruler Of The World (2013), Camelot (2012), High Chaparral (2002) and Galileo (2001).
*Aidan O'Brien is the only trainer to send out the winners of all three Group One races at the Investec Derby Festival in the same year. In 2012 he won the Investec Derby with Camelot, the Investec Oaks with Was and the Investec Coronation Cup with St Nicholas Abbey.
*This year O'Brien will take his total number of runners in the Investec Derby since 1998, when he was first represented by Second Empire, Saratoga Springs and King Of Kings, to a record 85.
*Frankie Dettori has had 23 Investec Derby rides - the most of any jockey currently riding - but this year's race is the first time he will partner an Aidan O'Brien-trained horse, Dee Stakes winner Circus Maximus.
*If Donnacha O'Brien, Aidan O'Brien's younger son, scores for his father in this year's Investec Derby, in which he rides Broome, he and Aidan will become only the second father-son pair to win the premier Classic. The first - and only one to date - was Donnacha's older brother Joseph and their father, who won with Camelot in 2012 and Australia in 2014.
Frankie is an Epsom Downs Legend
Yesterday, Investec Ladies' Day, saw Frankie Dettori land his fifth Investec Oaks aboard Anapurna.
First successful in the fillies' Classic aboard Balanchine a quarter of a century ago (1994), Flat racing's most recognisable face was also triumphant on Moonshell (1995) and Kazzia (2002) who like Balanchine were owned by Godolphin.
His latest two successes in the Investec Oaks have come on horses trained by John Gosden - Khalid Abdullah's Enable in 2017 and Anapurna, owned by Helena Springfield Ltd and bred by Meon Valley Stud, yesterday.
He is the most successful current jockey by far in the Investec Oaks, with Ryan Moore the only other current jockey to have ridden more than one winner of the mile and a half fillies' Classic (Snow Fairy 2010 & Minding 2016). However, Dettori does have a way to go before becoming the most successful jockey of all-time in the Investec Oaks, with Frank Buckle partnering nine winners between 1797 and 1823. Perhaps a more realistic target is equalling or bettering the record of Lester Piggott, who won the Classic six times between 1957 and 1984.
Dettori famously had to wait until 2007 to ride his first Investec Derby winner at his 15th attempt on Authorized. He landed the premier Classic again in 2015 aboard Golden Horn and today rides Circus Maximus, the first time he has ridden for Aidan O'Brien in the Investec Derby.
The third G1 race run the Investec Derby Festival is the Investec Coronation Cup and Dettori is also the most successful current rider in this race, having been successful five times.
Dettori has now won 18 British Classics, seven more than closest rival Ryan Moore. Lester Piggott is the winning-most jockey of all-time in the British Classics with 30 successes between 1954 and 1992.
Frankie Dettori
Born: December 15, 1970, Milan, Italy. Background: the son of Gianfranco, 13-time champion jockey in Italy. Frankie (christened Lanfranco) Dettori arrived from his homeland to join Luca Cumani's Newmarket yard as an apprentice in July, 1985. His first success came on Rif at Turin, Italy, on November 16, 1986, and he rode his first British winner on Lizzy Hare at Goodwood on June 9, 1987. He passed 100 winners for the first time in 1990 when recording 141 successes and created history when riding all seven winners on the Saturday at the Ascot Festival in September, 1996. Dettori survived a horrific plane crash at Newmarket in 2000 in which the pilot was killed. He was retained by Sheikh Mohammed's Godolphin operation in 1993, but it was announced in September, 2012, that the retainer would not be renewed. It was subsequently revealed he had failed a drugs test whilst riding in France. On December 5, 2012, Dettori was suspended from riding for six months after being found guilty of taking a prohibited substance, believed to be cocaine. He returned from his ban at the 2013 Investec Derby Festival and spent five years as a retained rider for Sheikh Joaan Al Thani but now rides mainly for Newmarket trainer John Gosden and has had a lot of success thanks to that partnership. He is married to Catherine and they have five children. His best total of British winners - 233 - came in 1994 and he has ridden over 3,000 winners in Britain. Accolades/achievements: British champion apprentice in 1989 and champion jockey three times (1994, 1995 and 2004). Awarded an honorary MBE in December, 2000. He is the most successful current jockey at Royal Ascot with 60 successes. British Classic Wins (18): QIPCO 2000 Guineas (1996 Mark Of Esteem, 1999 Island Sands, 2016 Galileo Gold), QIPCO 1000 Guineas (1998 Cape Verdi, 2002 Kazzia, 2011 Blue Bunting), Investec Derby (2007 Authorized, 2015 Golden Horn), Investec Oaks (1994 Balanchine, 1995 Moonshell, 2002 Kazzia, 2017 Enable, 2019 Anapurna), St Leger (1995 Classic Cliché, 1996 Shantou, 2005 Scorpion, 2006 Sixties Icon, 2008 Conduit).
Investec Derby Record: Two wins from 23 rides - Authorised (2007), Golden Horn (2015)
Investec Oaks Record: Five wins from 23 rides - Balanchine (1994), Moonshell (1995), Kazzia (2005), Enable (2017), Anapurna (2019)
Investec Coronation Cup Record: Five wins from 19 rides - Swain (1996), Singspiel (1997), Daylami (1999), Mutafaweq (2001), Cracksman (2018)