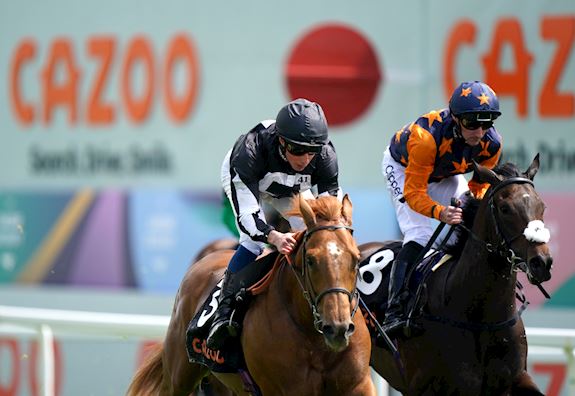 The opening race on Ladies Day at The Cazoo Derby, the Cazoo Woodcote EBF Stakes (6f), went the way of 4-1 Joint-Favourite Legend Of Xanadu.

The two year old son of 2006 St Leger hero Sixties Icon came with a strong run in the final furlong and held off the late challenge of Self Praise to take the honours by a length and a quarter.

Jack Channon, assistant trainer to his father Mick, said: “That was a great performance.

“He’s a cracking homebred by Sixties Icon and I think he won this race with a runner from his first crop. He’s coming to the end of his career now and he’s had another one.

“He’s a lovely horse and always has been - from day one we knew he was going to be our first runner. Everyone keeps saying he needs further but you only need to look at the horse to see he’s built like a two year old and he’s certainly proven that. It’s great to have a nice winner for Box 41 again and to get their name back in the winner’s enclosure.

“We had a pretty tricky draw (9) and everyone seemed pretty keen to go forward but we were quite happy to just drop in with him. But when we got caught four deep going into the bend I thought he’d have to be quite good to do it from there and he certainly was – he looked the winner from two down – so it was a very good performance.

“He’ll certainly get further but I asked William (Buick) after Redcar whether we should step him up and he said not to and to stay at six (furlongs) as he’s got so much speed. Today he showed he can stay as well - they went hard and he stayed really well up the hill there.

“The Chesham (at Royal Ascot) would be the obvious route, it’s not a Listed race anymore so he’ll have no penalty going into that so I’d think we’d go there.”

Winning rider William Buick added: “He’s a nice horse and he’s got plenty of experience. We were a bit wide, but I was happy to be where we were because of the ground. On fast ground it’s usually an advantage to be down near the rail, but it wasn’t going to be like that today. It’s good ground - a bit tacky but drying out all of the time. It’s not bad at all.”

Hugo Palmer, trainer of the runner-up Self Praise, said: “My binoculars are broken, and so I was watching from the top of the grandstand and was watching the wrong horse! Time to go to Specsavers. I only noticed we were second literally as they crossed the line, so I’m going to have to go and watch the replay.

“I’m pleased with him. It didn’t look like a strong race beforehand on paper, and it didn’t look it in the paddock, either, but he’s run very well and he’s certainly going to win races. He’s a bonny horse and will win races, and he’ll keep improving, I think.”

Jockey Rossa Ryan, rider of third home Commander Straker (5-1), said: “He jumped quick enough. All his form has been over five (furlongs) and he showed a lot of speed early, but he has run well and he will come forward again. I think coming back to five will benefit him for the time being but time will tell.”