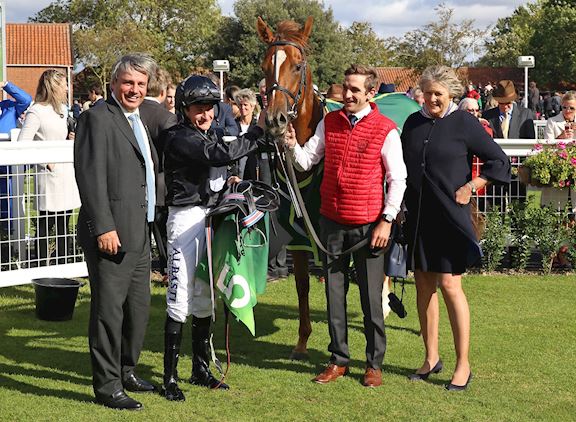 9th October 2019 – Irish trainer Jessica Harrington will bid to land a third juvenile fillies Group 1 victory in the space of a fortnight when she saddles Cayenne Pepper in the bet365 Fillies’ Mile at Newmarket’s Rowley Mile Racecourse on Friday (11th October).

At a total value of £567,500 the richest Group 1 two-year-old race in Europe, the bet365 Fillies Mile has attracted a nine-runner field and is the highlight of the opening day of the two-day Dubai Future Champions Festival, itself the culmination of the four-week Newmarket Gold Season.

Harrington has a spectacular group of two-year-old fillies on her hands at present and knows what it takes to win a big race on the Rowley Mile having landed the Group 1 Juddmonte Cheveley Park Stakes there with one of them, Millisle, on 28th September (photographed in the image above).

Last Sunday she was in Paris to oversee Albigna’s victory in the Group 1 Prix Marcel Boussac, so Cayenne Pepper is on the cusp of completing a remarkable top level treble for the yard.

A daughter of Australia who was bought as a foal for £204,750 at Tattersalls in Newmarket in late 2017, Cayenne Pepper is unbeaten in three career starts. After winning a maiden at Leopardstown in June, she followed up in a conditions race at Tipperary in July before making all the running when stepping up to a mile in the Group 3 Flame Of Tara Stakes at The Curragh on 30th August.

Her opposition is led by the ante post favourite for next year’s QIPCO 1000 Guineas, Quadrilateral, and the Group 2 May Hill Stakes heroine, Powerful Breeze – both were supplementary entries for this race at a cost of £40,000.

This pair have identical two-from-two career records, though Quadrilateral, a runaway nine length scorer at Newbury three weeks ago, has yet to be tested in Pattern Race company.

Aidan O’Brien, the Irish Champion Trainer who has won this race three times in the last five years, relies upon the Group 1 Moyglare Stud Stakes winner, Love, while Boomer, a length behind Powerful Breeze when second in the May Hill and previously successful in the Group 3 Prestige Stakes at Goodwood, also takes her chance.

“We have always liked Cayenne Pepper and what she’s done is already on the board, she’s three-from-three, she’s won on good ground, she’s won on fast ground and she won with a bit of ease in the ground at The Curragh last time.

“I was delighted with her victory in the Flame Of Tara Stakes where she saw the mile out well. She made the running then and also on her previous start but she doesn’t have to lead.

“She’s a straightforward filly who is very laid back so I can’t imagine the travelling over to Newmarket would worry her and she’s a well-balanced individual who has won on a variety of tracks here in Ireland so the dip should not be a problem either.

“To win a third Group 1 in the space of a couple of weeks would be simply unbelievable.”