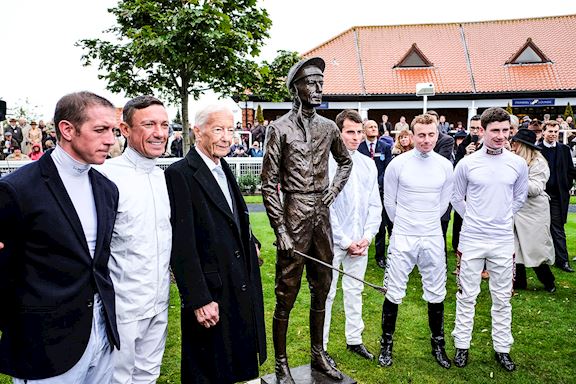 15th October 2019 - Legendary jockey Lester Piggott was honoured by current stars of the weighing room, officials and racegoers at Newmarket Racecourses on Saturday (12th October) as a life-size bronze sculpture of him was unveiled at the Rowley Mile Racecourse.

The bronze, which is one of nine created by William Newton, has taken pride of place in the parade ring and was unveiled shortly before the first race on the second and final day of the Dubai Future Champions Festival, on which the feature race was the Group 1 Darley Dewhurst Stakes.

It was fitting that 83-year-old Lester should be honoured at Newmarket, given his considerable achievements at the Home of Horseracing. He enjoyed unrivalled success in a number of key races at the Rowley Mile and the July Course, not least the Dewhurst Stakes itself, his ten wins in the time-honoured juvenile contest the most of any jockey.

Lester’s first win in the race came in 1956 aboard Crepello and his love affair with the race continued across four decades, with his tenth and final winner being Diesis in 1982.

The Rowley Mile was the scene of a number of Lester’s career highlights, his seven Classics at the course featuring his unforgettable triumph aboard Rodrigo De Triano in 1992.

Frankie Dettori was on hand to unveil the bronze with Lester, accompanied by Champion Jockey-elect Oisin Murphy and former champions Ryan Moore and Jim Crowley.

The riders were joined by officials from The Jockey Club, sculptor William Newton, Lester’s friends and family and a large number of Newmarket Annual Badge Holders inside the parade ring, while large numbers of racegoers gathered around to watch.

“Lester Piggott’s contribution to horseracing has been immense. Generations of fans were attracted to the sport by his incredible achievements, many of which came at Newmarket’s two racecourses.

“We are therefore delighted that one of William Newton’s beautiful pieces will reside at the Rowley Mile and it was wonderful to see the affection the racing community still has for Lester during Saturday’s ceremony. My thanks go to Frankie, Ryan, Jim, Oisin and all those who made the time to attend.

“I am sure Lester’s presence in the parade ring will serve to inspire jockeys competing here for generations to come and I hope Lester and his friends and family enjoyed their afternoon with us.”

“Every young jockey, when they’re growing up, they want to be Lester Piggott. He is a legend.” 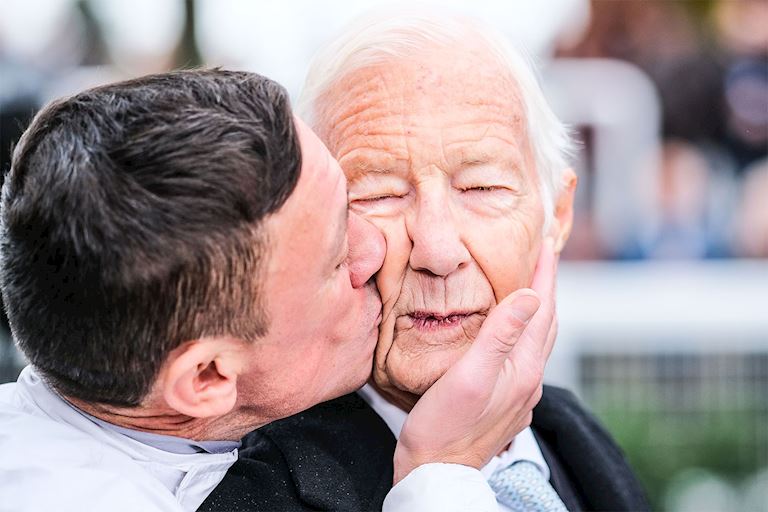