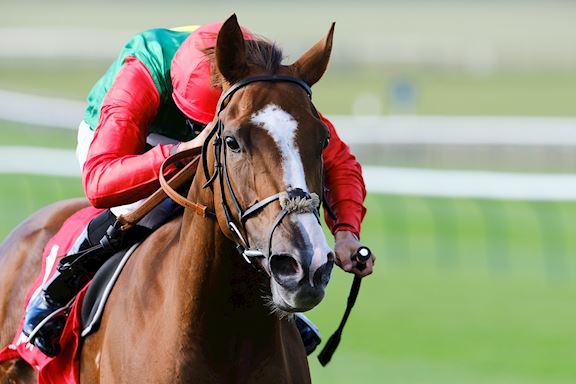 The Kingdom of Bahrain Sun Chariot Stakes is the final Group 1 race of the season for horses aged three and older at the Home of Horseracing, with 12 fillies and mares set to go to post over the famous mile

On paper, this looks a competitive renewal of a race won by some of the greats down the years, so here is a bitesize guide to each runner to help you make your pick.

This mare needs no introduction at the Rowley Mile, having won a QIPCO 1,000 Guineas at three and then this very race 12 months ago. A firm favourite in these parts, can she make it three Group 1 wins at the Home of Horseracing?

Pros
Richard Hannon himself admits that Billesdon Brook seems to save her best for the Rowley Mile, so it would be no surprise to see her break a streak of three consecutive runner-up finishes in her most recent starts and win again.

Cons
It has been a wet week in Newmarket, with the ground officially Soft at the declaration stage and unlikely to improve. While she can handle some cut, her form would suggest she does not want it too soft, so conditions would be a worry.

A week after Antonia De Vega landed a Group 3 at the Cambridgeshire Meeting for the same connections, Feliciana De Vega makes her comeback after almost a year away. Her last outing was a win in the Group 3 Darley Stakes here last October.

Pros
In five career starts, two of her three wins have come at the Rowley Mile in the autumn. Soft ground will not be a problem and Ralph Beckett’s horses have been running consistently well lately.

Cons
An absence of 357 has to be a worry against rivals one would expect to be more match fit than Feliciana De Vega. Connections would surely be happy with a positive performance with a view to the future.

One of two fillies supplemented for the race this week, Half Light will represent France, a country whose runners have a decent track record. Esoterique was the most recent to come from across the Channel to win in 2015, while in 2012 it was Siyouma.

Pros
Godolphin opted to pay a supplementary fee to allow Half Light to take her chance, so clearly somebody thinks she is capable of running well. Travel should not be an issue, with good runs in Germany under her belt and the soft ground should not be a problem either.

Cons
The form of her runner-up finish in the Prix Rothschild in August does not appear to be working out too well, so a win here would require a step up on her most recent efforts.

A Group 3 winner earlier this year, Lady Bowthorpe has been given a 41-day break after being soundly beaten at Sandown most recently. This is her first outing in Group 1 company and she will likely be sent off a price reflecting this.

Pros
Lady Bowthorpe is by Nathaniel, the sire of the great Enable, who will be seeking to make history with a third win in the Qatar Prix de l’Arc de Triomphe at Longchamp on Sunday. The conditions are an unknown for this filly, but Nathaniel’s progeny do tend to handle some cut.

Cons
It would be a leap of faith to suggest Lady Bowthorpe has shown the type of talent that would see her challenges those at the top end of the betting in this race. A bold showing and top-half finish should please connections.

Can an all-female trainer and jockey combination come out on top in this Group 1 for fillies and mares? Lavender’s Blue has not won a race since August 2019 but has finished in the frame on her last two starts.

Pros
Hollie Doyle is one of the rising stars of the weighing room, with her increasing profile out of the saddle thoroughly deserved given the progress she has made in it in recent years. She has thoroughly earned the right to compete at the highest level in a race like this.

Cons
It’s been a long time since this daughter of Sea The Stars showed anything like the kind of form that would provide optimism heading into a Group 1, so a big step forward is required.

Things have not gone to plan of late for this filly after an explosive start to the campaign. Three consecutive wins culminated with victory in the Tattersalls Falmouth Stakes at the July Course this summer but she has since finished third at Goodwood and a long way down the field in the Darley Prix Jean Romanet at Deauville. She has been absent since.

Pros
Those defeats came over trips further than a mile; over this trip she is undefeated, so if the Deauville disappointment has been left behind, Nazeef has to rank as a serious contender here. Jim Crowley has had a magnificent year for his boss, Hamdan Al Maktoum, and John Gosden knows a thing or two about winning races like this as well.

Cons
But what if France has left a mark? She has been on the go for a while now this year and maybe she had just run out of steam. Her Falmouth win came on soft ground but it could still be debated whether those conditions bring out her best.

Terebellum finished third in the Falmouth Stakes won by Nazeef and has been off the track since. That result was a surprise based on the betting on that day and John Gosden also admitted afterwards that he thought Terebellum would beat Nazeef that day. So what of this day?

Pros
Her win in the Betfair Dahlia Stakes at this venue in June was most impressive and there was much to like about her most recent displays, despite being defeated in both. More often than not, she has also performed very well following a break.

Cons
She looked like the winner for a while in the Falmouth Stakes but flattened out at the end. The fact is that she is yet to win over a mile, so for all her class, does she perhaps lack a little bit of speed compared to her big rivals in this race?

It has been quite the week for the reigning Champion Jockey, Oisin Murphy. He has begun a fight to clear his name after testing positive for cocaine having provided a sample to authorities in France earlier this year. He is adamant that he has done nothing wrong and he is doing everything right in the saddle at the moment, so there are no worries about his mind being elsewhere.

Pros
By Frankel, Veracious is a high-class mare. She won the 2019 Falmouth Stakes before finishing second in this race. She returned to action in 2020 with a Listed win at Haydock in August (having had wind surgery) and ticks all the boxes in terms of breeding and connections.

Cons
There has to be a question mark about her ability to produce her best form on ground as soft as she is likely to encounter this weekend.

The second of two fillies supplemented for the race earlier this week, Champers Elysees heads to the Rowley Mile in fine form. A run of four consecutive wins culminated in victory in the Coolmore America ‘Justify’ Matron Stakes at Leopardstown last month.

Pros
As a three-year-old, we may not have seen the best of this filly yet, for all she is clearly in red-hot form. She has performed on testing ground and could hardly have more going for her.

Cons
Her breeding is far from being the sexiest in this race and this is also her first trip overseas to race, so there is at least one unknown factor.

While not that of the level achieved by Champers Elysees, Cloak Of Spirits also arrives in excellent form, having won the Listed Tasleet British EDF Rosemary Stakes at the Cambridgeshire Meeting. Over course and distance in June, she finished second in the QIPCO 1,000 Guineas behind the excellent Love.

Pros
At this time of year, fillies and mares can often find their form tailing off. In Cloak Of Spirits, we know we have a runner highly likely to put her best foot forward.

Cons
Somebody had to finish second to Love, didn’t they? It would be foolish to read too much into that form, so she still has it to prove at the highest level. Her trainer also spoke in the wake of last week’s win about retirement and a broodmare career, so this has the feeling of an afterthought.

Another filly who chased Love home in June (she was fourth that day), Final Song has had a perfectly creditable campaign in 2020.

Pros
Her best performance of the season came most recently when second in a Listed race at Newbury last month.

Cons
She has been on the go for a long time and this will be her tenth run of a campaign that began in January. On top of this, she has an awful lot to find to mix it at this level.

Aidan O’Brien has won this race three times, most recently with Roly Poly in 2017. He seeks a fourth with June’s Irish 1,000 Guineas winner, who is seeking to reverse the Matron Stakes form with Champers Elysees.

Pros
The trainer. The jockey. The owners. The stallion. This lot know a thing or two about winning Group 1 races at Newmarket and nobody would be surprised to see Peaceful add to their remarkable roll of honour.

Cons
She has been beaten in her two starts since her Classic win in June but it is hard to pick holes in her claims. Perhaps the ground could put a spanner in the works but that cannot be said with any great degree of conviction.

The Matron Stakes has set this race up perfectly and it is fascinating that the Champers Elysees team appear to like their chances of confirming their filly’s superiority over Peaceful. Talented Galileo offspring trained by Aidan O’Brien are hard to bet against at the Rowley Mile, so a chance is taken on her reversing the form. Nazeef will give them the most to think about.