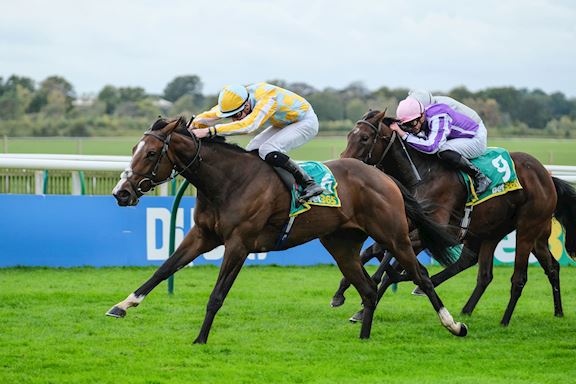 The QIPCO 1000 Guineas is the first fillies’ Classic of the season and takes place on the Rowley Mile on Sunday 2nd May, 24 hours after the QIPCO 2000 Guineas. It is part of the QIPCO British Champions Series. There are 63 entries in 2021.

Current ante-post favourite is Pretty Gorgeous, already a Group One winner on the Rowley Mile having landed the bet365 Fillies’ Mile in October. 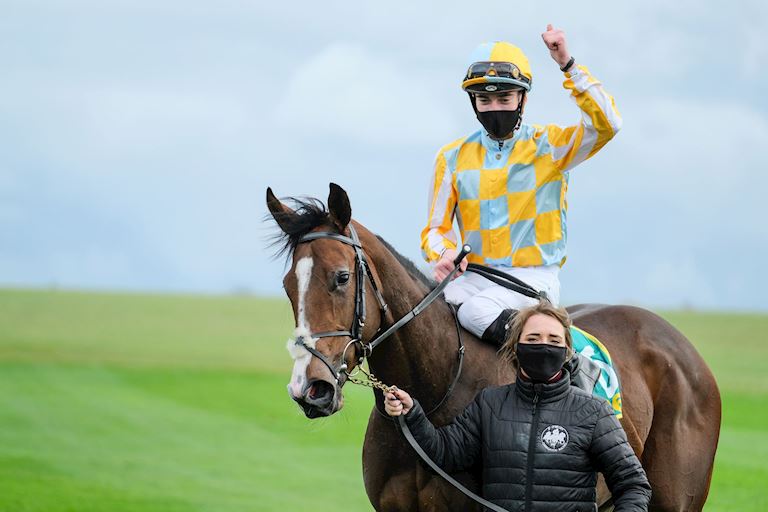 Her trainer Joseph O’Brien reported: “She is obviously a course and distance winner so we know she gets the trip well. I was very pleased with the performance in the Fillies’ Mile. It was a brave performance as she had a bit of an interrupted preparation going into the race.

“She is an exciting filly. Her pedigree suggests she will be open to stay further than a mile as well which gives her plenty of options. Like with Thunder Moon, she has wintered well and I’m pleased with where we are.

“She was consistently solid last season and hopefully we can keep it that way. She was fine on both soft and good ground so she is versatile ground wise. A decision on whether she has a prep run will depend on how she is training and how we feel closer to the time.”

Below can be found updates from trainers Jane Chapple-Hyam, Andrew Balding and Richard Hannon.

Unbeaten in two starts over seven furlongs on the Rowley Mile in 2020, including the Group Three Godolphin Lifetime Care Oh So Sharp Stakes

“I’m thrilled with the way she has come back from her winter break at Ben and Lucy’s Sangster’s in Manton. She has put on a nice 77lbs and she has matured into a filly that should be competitive for the Guineas. The plan will be to start her off in the Nell Gwyn and then two weeks later head for the Guineas. It was a quick turnaround between her two runs in her maiden and the Oh So Sharp last season so we know she can do it. I think she is a serious filly that is potentially top drawer. She has wintered well and developed nicely. She has got all the right attributes. She has done it on different ground types and I think if it is real good ground you will really see her scoot along. She is not complicated as she doesn’t have to lead or have cover or come with a late run. I just think she has got an engine. I think having her has helped everyone in the yard and myself get through the winter and I just hope we can get her to the Guineas now. If you look at her last run she hit the rising ground going away so I don’t see the mile being a problem at all.”

Won two of her three outings in 2020, ending the campaign with victory in the Group One Juddmonte Cheveley Park Stakes at Newmarket in September.

“We are very much looking at the Guineas but that is still a long way off. She has had a good holiday but she still looks a bit wintery in her coat so we will see what happens over the next month as we all know what fillies can do in the spring. I really was impressed in the Cheveley Park as it was only her third run and she was entitled to improve again. She has done well physically but we haven’t really started serious work yet. Her pedigree offers mixed messages regarding the trip and that is about all I can go on at this stage. I’d be hopeful she would get it though as she relaxes pretty well but there is nothing we can do to find out until we try it. I think the plan if all goes well is to go to the Fred Darling first as a prep as I would like her to go over seven before going over a mile.”

“She has been a great advert for racing and for new owners coming into the sport. She was a pleasure to train last year. I didn’t think she was just a two year old I always thought she had the scope to go on. She didn’t handle the track great in the Cheveley Park but she ran well to finish fourth and the little bit more experience she gained will do her well. I’d think we will be looking at the Fred Darling first but I don’t think a mile will be a problem. She didn’t do anything wrong last year.”

“Shine For You is a really smart filly and she seemed to enjoy her last run at the end of the year when the ground was pretty soft. She looks decent. She has got a lot of condition now. She hasn’t won a Listed race yet but hopefully she will be able to pick one up. A Guineas trip I feel will suit her. She seems to like soft ground and if it is like that at Newbury we will go for the Fred Darling.”

Daughter of 2013 QIPCO 1000 Guineas winner Sky Lantern. Second on her only start in an Ascot maiden in July.

“She only had one run last year and we put her away after that. She looks like she has huge potential. Hopefully she is a nice filly and we were very lucky with her mare. She was always a very heavy filly and she ran very well at Ascot and we saw enough that we decided to just put her away for this year.”

Won Nursery on the July Course and ended busy campaign when runner-up to Saffron Beach in the Group Three Godolphin Lifetime Care Oh So Sharp Stakes at Newmarket.

“I’m very pleased with her and she might run in the Spring Cup at Lingfield at the weekend. We might go for the Prix Imprudence if travel allows it afterwards and this race is a nice race to take on the way. The Guineas is an option but she has to prove she is up to that level. She was kept busy last year but Billesdon Brook had plenty of runs at two and that didn’t do her any harm and she seemed to improve all year. Seven might have been on the sharp side for her in the Oh So Sharp but I think a mile will be plenty for her.”