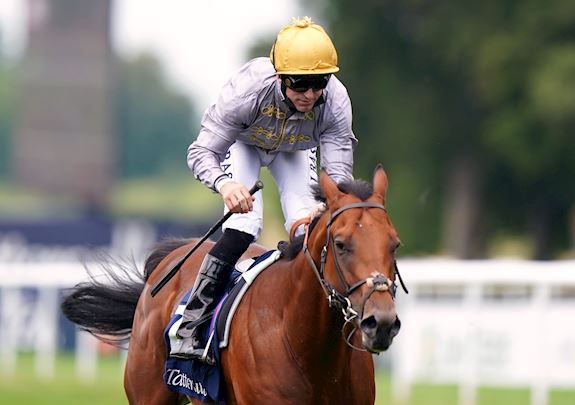 Lusail handed the Hannon family a remarkable ninth victory in the Group Two Tattersalls July Stakes when landing the 2021 running of the six furlong contest for two year olds.

It was a third success in the race for trainer Richard Hannon following Ivawood (2014) and Mehmas (2016), the sire of Lusail. Hannon’s father Richard Hannon Sr, saddled the winner on six occasions.

Returned at 15-2, the Mehmas colt came out on top by a head from Asymmetric (11-1) with the third, Sam Maximus (40-1), another head further back after a thrilling three-way tussle inside the final furlong.

Asked if he had been confident of the result while waiting for the outcome of the photo finish, Richard Hannon said: “I did think we’d won actually. As a trainer you kind of always know and there’s only been a couple of times where I’ve been wrong – one of those was Mojo Star last year when I thought he’d won and he hadn’t.

“I thought Lusail deserved to win - he ran around a bit going to the line but it was a big shout going back to six furlongs and he’s done it very well. It’s a bit of a cliché but he’s come back in trip, he’s extremely relaxed and I think we’ll take him to Goodwood, that’s a certainty, but whether we’ll go over six or seven (furlongs) we’ll see.

“He wasn’t really high up in our pecking order at home to be honest. He’s worked OK and we took him to York and he went there and won. We can go further with him yet and just like his sire, Mehmas, he’s extremely honest and very chilled out but he will get further and I don’t think he’s just a two year old.”

Jockey Pat Dobbs added: “I travelled very well into the dip and I knew he’d find because he gets seven but he got a little bit lonely in front. Martin (Harley, jockey of second home Asymmetric) was a long way away from me so I wasn’t very sure whether we’d won or not.

“It was a bit close for comfort but he’s very intelligent and laid back for a two year old. Ground wouldn’t matter for him and definitely the faster the better but he wouldn’t want it too slow. I think we could go for the Richmond Stakes next.

“I was surprised we went for the six (furlongs) and I was more geared towards the race over seven on Saturday (the Group Two bet365 Superlative Stakes), but with the forecast being uncertain we thought we’d take our chance and it’s worked out well. He has the attitude to step up in trip, he’s relaxed and does everything right.

“He hasn’t really come into his coat yet and is still a little bit behind so there’s plenty of improvement in him. He goes about his work very relaxed so he’s not one to light up the gallops but he’s done everything asked of him so far.”

Trainer Alan King said of runner-up Asymmetric: “He ran a huge race and it was a big step up. He was in front a stride and he has just got nailed on the line but he has run very well. He had won his two and he had to step up and we were proved right.

“He is a lovely colt. Martin (Harley, jockey) has always felt that he would be better on quicker ground but he goes on the soft and slower ground. He would be the sharpest two year old we have had.”

Asked about future targets, King added: “I don’t know where we go yet. He is in the Gimcrack - we put him in that the other day. Whether we stick at six or go up I don’t know as I’ve not really had a chance to talk to Martin.

“I would think we would probably stick at six but he is so relaxed you could possibly go further.”