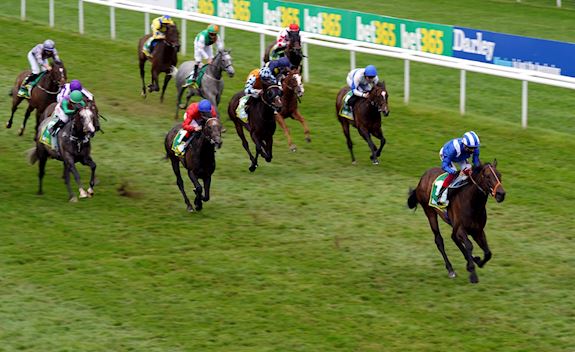 Motakhayyel defied top-weight of 9st 10lb to win the bet365 Bunbury Cup for the second year in succession. The five year old becomes the first horse since Mine in 2005 and 2006 to win the seven-furlong heritage handicap in consecutive years.

Returned at 11-2, the Shadwell-owned and Richard Hannon-trained Heeraat gelding raced prominently under Frankie Dettori and pulled away from his 17 rivals in the final furlong for a very comfortable three and half-length success over Fundamental, with Lord Rapscallion another length and a quarter away in third.

Richard Hannon was saddling his fourth winner at the Moët & Chandon July Festival in 2021 and recording a 47.75-1 double on the day, following the victory Ardbraccan in today’s opening race.

He said: “He’s a gentleman of a horse and has been for years. He’s such a pleasure to have around and whoever rides him he does his thing.

“But he’s struggled and is sort of between a rock and a hard place with his handicap mark and running in Listed races. He ran a very good race here in the Criterion Stakes and I watched it on the same screen as I watched him last year.

“We’ll speak to Angus (Gold) and Richard (Hills) and see what they want to do next.”

Winning jockey Dettori added: “It took me by surprise as I still had a double handful two out but in handicaps he’s very good. Richard called me and told me that Jim (Crowley) was going to York and I couldn’t do the weight on John’s (Gosden) horse (Fundamental).

“He said to me ‘look, get on this horse because he loves Newmarket’ and he was right. I didn’t expect him to be right! I got a nice run into the race from Hollie (Doyle, Lord Rapscallion) and I never saw a horse after that.”

Thady Gosden, who trains runner-up Fundamental alongside his father John, said: “We are very pleased with him and he has run a great race. The winner is a Group horse but we have run well against it.

“Martin Harley gave him a great ride and he loved the ground and seven furlongs suit. He is in the Lennox and City Of York Stakes but he is a horse that we might be able to travel with. He loves this fast ground so where we will go will depend on that.”

Hollie Doyle, the jockey on third home Lord Rapscallion, said: “I wanted to get out in a prominent position and I found myself with an easy lead. Once he has hit the rising ground he has run on again. He has definitely got a big day in him.”