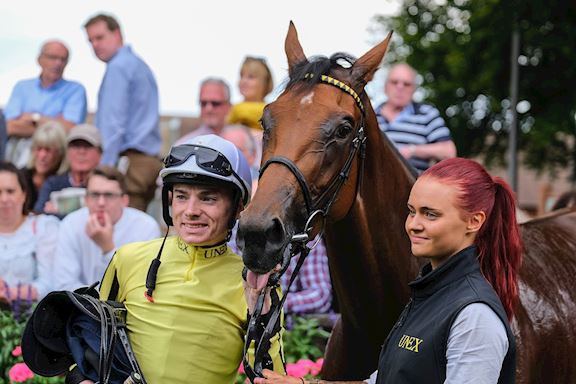 Newmarket trainers to the fore on final day of July

The month of July concluded at Newmarket with a most informative seven-race programme on the July Course.

It was a good day for horses trained in Newmarket, with the feature Listed British Stallion Studs Chalice Stakes going to the Roger Varian-trained Save A Forest, who had run so well when fourth in the Cazoo Oaks. The Godolphin team were also on the mark while Patrick Owens was over the moon to train his first Newmarket winner.

Save A Forest gave the form of the Cazoo Oaks another boost after securing the most significant victory of her career with a last to first success in the British Stallion Studs EBF Chalice Stakes.

The Roger Varian-trained three year old made her first start since finishing fourth in the mile and a half fillies’ Classic at Epsom Downs 57 days ago a winning one when making the most of a drop in class in the feature Listed contest.

Anchored at the rear of the field early on by Callum Shepherd following a slow start, the 13-2 shot gradually worked her way into the mile and a half prize before pressing on with hat-trick seeking 13-8 favourite Sayyida approaching the final furlong.

Showing a tenacious attitude in first time cheek pieces, Save A Forest found plenty when asked for her maximum effort to hold Sayyida at bay by half a length with the Sir Michael Stoute-trained Portfolio a further neck away in third.

Tim Gredley, representing winning owners The Gredley Family, said: “We are kind of ready at the start now as we know she is sleepy and that is why we put the cheekpieces on.

“Callum knows how to ride her and she just keeps on going and going. I wasn’t worried as I was expecting her to be like that at the start.

“I said it the other day kind of flippantly but she does remind of Big Orange as she has got that kind of gameness about her.

“She physically looks like him but her running style is very different. She is just very hardy and relentless the way she gallops.

“She started on the all-weather and she was very weak back then but we thought she would get better once we went on.”

An immediate return to the top table could be on the cards for Save A Forest, who holds Group On entries in both the Darley Yorkshire Oaks at York on August 19th and the Cazoo St Leger at Doncaster on September 11th.

Gredley added: “We like to swing the bat at big races but will speak to Roger. However, she is not ground dependant.

“We will have a look at what is about. If anything she will be going up in trip as I think she needs a bit further to see her at her best.

“She will be around next season as well. She is here to race and we will enjoy her.

“Honestly I think she will be better next year once she has had a break and muscled up a bit. She is winning these races off guts and grit at the moment.”

Patrick Owens admitted it was “brilliant” to finally train a winner at Newmarket after Adaay To Remember got her career back on track on the July Course with a clear cut success in the Maritime Cargo Fillies’ Handicap.

Having been associated with plenty of success at the course during his time as assistant to Classic-winning trainer Luca Cumani, the Irish-born handler secured a first victory under his own name at the track in the six furlong event.

Despite hanging to her left momentarily Adaay To Remember, who was sent off the 6-4 favourite, finished strongly once straightened up by Hollie Doyle to defeat the four-time seeking Al Simmo by three and a half lengths.

Owens, who started training in 2019 and is based at St Gatien Stables in Newmarket, said: “For me to have a winner at Newmarket is brilliant. I worked for Luca Cumani in the mid-1990s and I came racing with his good horses up here. So for my name to be down as a trainer winning a race I’m just buzzing.

“It is great for the owners (GB Horseracing) as they brought her as a yearling for just 6,000 guineas and they have been so patient.

“She is a big filly and she is only now filling her frame. She worked good as a two year old but we stopped and backed off her and just let her keep ticking away.

“I wasn’t worried about the ground as she is versatile. She did hang a little bit but that is just habit and she can do it home. When you let her down to run she will run. I’d love to think she could get a bit of Black Type.

Saeed Bin Suroor will take aim at the Sky Bet Ebor at York with Untold Story, who left behind his Royal Ascot disappointment when carrying top weight to glory in the Patti Crook Memorial Stakes.

After finding two and a half miles beyond him in the Ascot Stakes the Teofilo colt, a 7-2 chance, secured a first victory on turf when proving two and a quarter lengths too strong for recent Windsor scorer Strawberry Rock on his return to a mile and a half.

Following the race Untold Story was cut from 33-1 into 16-1 by Sky Bet to give Bin Suroor, who is also responsible for ante-post favourite Live Your Dream, a third success in the prestigious handicap on the Knavesmire on August 21st.

Bin Suroor said: “The trip was too far for him last time at Ascot. He is tough and he tries hard.

“Having juice in the ground helps him. I think he is best on good or good to soft ground.

“We will take him to the Ebor now with Live Your Dream and I think a mile and six will be better for him.”

Modern News could form part of trainer Charlie Appleby’s team for the 2022 Dubai World Cup Carnival after defying a 392 day absence to claim the Joyce And Charlie Guest Memorial Handicap by half a length on his first start as a gelding.

Appleby said of the 11-4 favourite: “He has been off for a long time but he had been doing some nice work in the spring but he met with a setback therefore he missed the first half of the season.

“Coming into today he had done some nice work leading some nice horses so we knew he was going to be competitive.

“At this time of year we are looking at the team for Dubai and we are in the process of sorting that out so we will see where he goes in that pecking order.”

Owner Kevin Bailey will consider staying away again after Anythingtoday (7-2) completed a double for Hollie Doyle when making his stable debut for George Boughey a winning one by half a length in the concluding Bob And Liz 40th Wedding Anniversary Handicap.

Michelle Sallis, the owner’s representative, said: “He belongs to my boss Kevin Bailey, who runs Woodhurst Construction Ltd who also had a runner at Doncaster.

“He went there so we came here. I’ve just rung him and said you have made the wrong decision!

“He has just moved to George’s yard but George knows him well from when he was trained by Hugo Palmer.

“The fast pace helped him and Hollie was different class.”