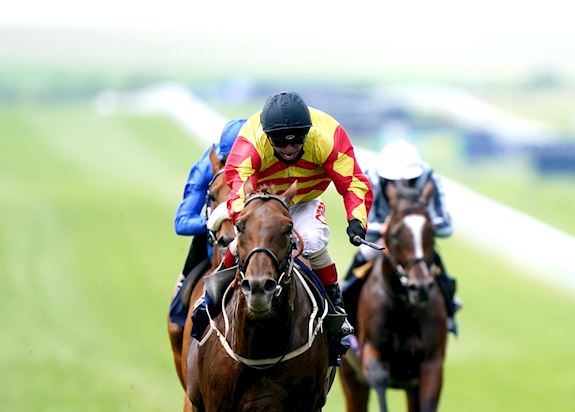 Sir Ron Priestley was hailed a “proper warrior” by jockey Franny Norton after he made every yard of the running in the mile and a half Princess of Wales’s Tattersalls Stakes, the highlight on Ladies’ Day at Newmarket’s Moët & Chandon July Festival.

The five year old Australia horse was successful over the same distance in the Group Two Betfair Exchange Jockey Club Stakes on the neighbouring Rowley Mile at the start of May. In today’s contest, Sir Ron Priestley faced a strong challenge from 1-2 favourite Al Aasy in the final furlong but kept finding more and held on gamely to take the honours by a head.

Returned at 100-30, Sir Ron Priestley was bred by Barry and Sandra Hearn’s Mascalls Stud in Essex and was handing trainer Mark Johnston a sixth success in the Princess of Wales’s Tattersalls Stakes, following Fruits Of Love (1998), Bandari (2004), Soapy Danger (2006), Universal (2013) and Communique (2019).

Charlie Johnston, assistant trainer to his father, said: “I think the ground is pretty key to him. At Ascot last year and then Ascot this year were the two times that he’s encountered soft ground and they were his two worst runs.

“It all reminds me very vividly of Communique who won the Jockey Club Stakes, got beat in the Hardwicke in between and then came back and won here. Fast ground and front-running tactics suit our horses.

“Obviously the favourite was very impressive when he cantered past Thunderous at Newbury, but he’s a horse I was hoping we could get in a fight with because if we did I knew we’d win – and that’s how it panned out.

“He’s still in the King George (the Group One King George VI & Queen Elizabeth Stakes at Ascot on July 24th). I was actually saying to Dad earlier in the week that it was about five grand that we had to pay to stay in, and we were saying ‘this is a bit ambitious!’. We hoped we’d win this and it would pay for itself, so the option is now there.

“I think the Irish Leger will be his big target, but between now and then it’s open to discussion.”

Jockey Franny Norton added: “To be honest, he slipped his back feet coming out and I was worried for a couple of strides. We knew nothing was going to go on and we were able to pick up his rhythm and get into his own pace.

“Sir Ron is a proper warrior. Al Aasy had a good go and I felt the last 100 yards or I was just emptying out a bit, but I thought that I’d done enough to kill it off.”