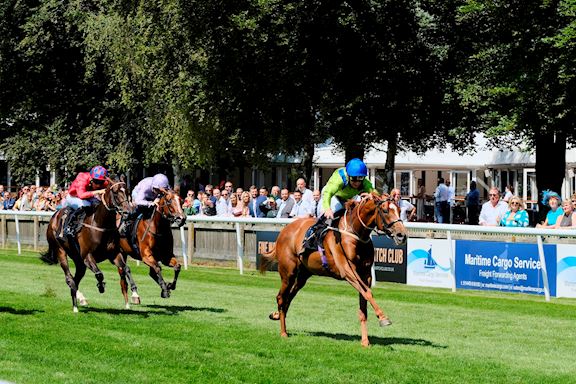 Charlie Appleby believes Wild Beauty is the “one they have to beat '' if she reproduces her last time out performance on her Group race debut in the 100% Racingtv Profits Back To Racing Sweet Solera Stakes at Newmarket tomorrow (Saturday 7th August).

The Frankel filly will bid to return to winning ways in the seven-furlong Group Three feature having found only the unbeaten Inspiral too strong in her hat-trick bid in the Listed Star Stakes at Sandown Park last time out.

Having shown her versatility regarding the ground and her effectiveness over the seven furlong trip the Godolphin handler is confident of a big run from Wild Beauty, who has already scored at Haydock Park and Newbury this campaign.

Appleby said: “I was pleased with the filly last time out and she has come out of that race at Sandown in good form.

“The winner was very impressive but she put up another game performance finishing second.

“If she reproduces that run again, it would make her very competitive and probably the one to beat.

“She is pretty versatile with whatever ground we encounter at the weekend as she has won on soft ground and run well on quick ground.

“We are quite comfortable with the weather whichever way it develops.”

Finishing one place behind Wild Beauty at Sandown was the John and Thady Gosden-trained Sunstrike and her rider, dual champion jockey Oisin Murphy, feels the Qatar Racing-owned Dark Angel filly is capable of being in the shake up again.

He said: “We were very happy with her run at Sandown Park where she bumped into Charlie Appleby’s horse who she will meet again.

“Although she was beaten by Wild Beauty last time, this looks a good opportunity for her to get some Black Type at Group Three level.

“Seven furlongs really suits her and she may even get a mile in time.

“The ground was soft in the Albany but that was against good horses and last time was a drop in grade. This doesn’t look the strongest Group Three.”

Connections of last time out course and distance scorer Value Theory are optimistic she can take another step forward and provide trainer Mark Johnston with a record fifth victory in the race following Jural (1994), Muraaqaba (2014), Main Edition (2018) and West End Girl (2019).

Charlie Johnston, son and assistant, said: “We could have gone a slightly more cautious route but the fact she won over course and distance on what is probably going to be similar ground were two positives to come here.

“There is a slightly bigger field than we anticipated and while the two that placed in the Sandown race set the standard we are not scared of the opposition as they have all been beaten and I think she deserves her place in the line-up.

“I’m not sure of the strength of her win last time out but she could do no more than beat what was in front of her and I would like to think she would improve again.

“She was strongly challenged a furlong and a half out last time but she found plenty and was going away again at the line.

“She is a nice straightforward filly and if she runs into the 90s she should be good enough to reach the frame.”

Richard Hannon expects Ardbraccan, who broke her maiden tag at the Moėt & Chandon July Festival at the track on 10th July, to be capable of handling a quick turnaround having finished fifth nine days ago in a nursery at the Qatar Goodwood Festival.

Hannon said: “This is a big chance for a lot of fillies to get Black Type including Ardbraccan.

“She was a little bit unlucky at Goodwood and would have gone very close.

“She is a filly I like a lot and though next year will be her time hopefully she can pick up some Black Type here. She is a course winner so she acts on the track.

“Hopefully the ground will be nicer here than it was at Goodwood as she is a good-moving filly. She is a little angel and a real sweet filly.”

David O’Meara feels Renaissance could easily take another step forward after appearing to appreciate stepping up to seven furlongs on her most recent start with a facile success in a novice fillies’ contest at Thirsk on 23rd July.

O’Meara said: “She is a filly that we thought a lot of but the first couple of times we ran her over a trip that was just too sharp for her.

“The step up to seven furlongs really seemed to suit her last time. She is in good form and we are looking forward to running her again.

“The extra furlong really did make a difference last time and I would have thought she will race over a mile before the year is out.

“We are still learning about her but hopefully if she takes a step forward like she did on her last run she can be in the shake up.”