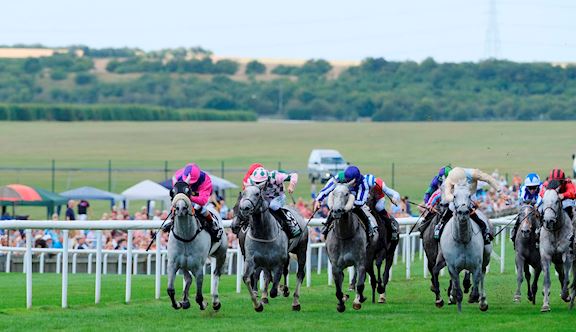 William Muir is hoping that the thriving Mitrosonfire (9-2 favourite with sponsor MansionBet) can secure a second success in as many weeks in front of the ITV cameras when he takes his chance in the unique MansionBet Beaten By A Head Grey Horse Handicap at Newmarket tomorrow (Saturday 14th August).

The three year old picked up a third win of the calendar year when striking in last week’s Shergar Cup and Muir has called up on the services of 3lbs claimer Stefano Cherchi to offset the 1lb rise in the handicap.

And having come out of that race in fine form Muir, who trains the son of Lethal Force along with Chris Grassick, is optimistic that the gelding can win again. He said: “He’s in great shape and has come out of his race at Ascot extremely well. He’s been moseying around most of the week out in the field and I thought it was a race which looked probably too good to miss because he’s been bouncing.

“I’d normally have left Martin (Dwyer) on him but I’ve claimed the 3lbs with Stefano Cherchi just to make it a little easier than a three year old lumping around 9st 9lbs, so hopefully he can go well again here.

“It’s a great thing and I don’t know whether I’ve ever had a runner in this before. You wouldn’t get many races offering this kind of money and you get horses coming back year in year out for it, so it’s a great initiative.”

The six furlong contest is the only race of its kind in the UK that is restricted to those registered as grey horses only, while there is also a corresponding race over the same trip at Newmarket this evening for non-greys.

The 10-strong line-up is a competitive one and includes the Michael Appleby-trained Case Key (11-2 joint second-favourite with MansionBet), who is a two-time winner of this race (2017 and 2019).

This will be the sixth year that the evergreen eight year old has taken his chance in this race and he arrives here having put in one of his best efforts to date when returning to winning ways at Nottingham last month.

Appleby made no secret of his desire to win this for a third time with Case Key and is optimistic about his chances. He said: “This is his big day of the year and it’s a race we’ve been aiming for with him. He’s won this twice before of course and hopefully he should have a decent chance once again.

“He was back to his best last time at Nottingham and he’s still on a good mark so hopefully the ground stays ok for him. He’s been a superstar for the yard and given his owner plenty of good days out and another good run would be great.”

Another runner who arrives here in good form is the Jedd O'Keeffe-trained Devil’s Angel (11-2 joint second-favourite with MansionBet), who roared back to form when striking over course and distance last month in the Thank You Dr Jerry Hill Handicap.

O'Keeffe revealed that last month’s start was very much a trial run with this race in mind and he feels the five year old will arrive at Newmarket tomorrow, when he will be partnered by Megan Nicholls, with plenty going for him. He said: “He’s in great shape and we’re absolutely thrilled with him. We came to Newmarket on his last start to have a little bit of a reconnaissance mission to see whether he liked the track and handled it and of course he loved it and won, so the plan has been for some time to come to this race.

“I think we can cope with the 3lbs rise, he loved the ground there that day and I think there are lots of positives. I think the race is an absolutely amazing idea and I wish I had more horses for it. It’s a real spectacle to see a collection of fast grey horses thundering up the July Course, it’s brilliant.”

Also lining up is the Tony Carson-trained three year old Cahors (6-1 with the sponsor), who arrives here on the back of two good placed efforts over five furlongs at Yarmouth.

The daughter of Lethal Force returns to six furlongs here and it’s a trip that Carson feels will suit the three year old. He said: “She’s fit and well and I think she’ll stay the six judged by the way she ran at Yarmouth last time. She’s a grey obviously so we thought we’d give it a go!

“She’s always run her races well and I’d like to think she’ll be thereabouts. It’s a great race and decent money for that kind of level and I’m disappointed that I can’t go as I’m at a wedding!”