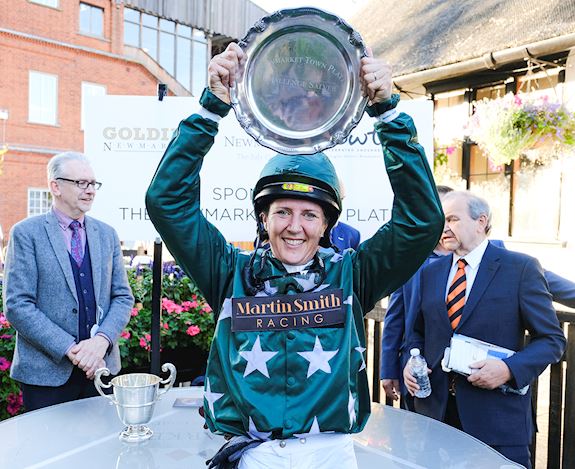 An amateur rider who won the world’s oldest and longest Flat horse race yesterday (Saturday) five years after being diagnosed with cancer says she is hoping to defend her crown next year as a 50 year old.

Jubilant Rachel Rennie had been due to ride in the historic Newmarket Town Plate in 2016 until she discovered what turned out to be a cancerous lump near her left breast just weeks before the race.

Five years later and after surgery, eight rounds of chemotherapy and 20 rounds of radiotherapy, she was finally able to realise her dream of not only riding in the 3m 6f contest – which dates back to 1666 - but winning it on her mount Friends Don’t Ask.

Now the 49 year old is considering taking out an amateur jockey’s license, meaning she can take part in races staged ‘under rules’ at racecourses around the country.

Rennie admits that while she had always been determined to take part in the race, she remains stunned that she has actually been able to achieve her dream and is now hoping to defend her crown as a 50-year-old next year.

She explained: “I’m just amazed I managed to get back from cancer and get fit. I’m fitter than I thought I was, as that was a major worry.

“I’m just glad to be here to do it and maybe I’ll be here again next year to do it. There was a little bit of me thinking back to five years ago as this was the culmination of the getting back progress. It was the one thing I didn’t get to do then that I have now.

“It is great. I could hear people shouting at me which I didn’t think I would be able to with the crowd that was here.

“It is slightly tempting to go for the amateur license as I’ve got a couple of horses I could ride in flat races. It is just a case of it being a full-time effort rather than just a three month effort.

“It has to definitely be one of the highlights of my life. Although I said I’m competitive I’ve never done loads of competitive things apart from horse-based stuff so to do something that is a bit more than your local show is good. The whole thing has been very special.”

During the race the pair found themselves positioned at the head of the chasing pack behind runaway leader Torquay as the field turned for home heading into the final mile of the historic race.

Waiting for the right moment to hit the front again, Rennie and Friends Don’t Ask surged into the lead with three furlongs left and battled hard to the line for victory by around a length from Stripe Of Honour and Jon Day.

Talking about the race itself, Rennie added: “I wanted to sit fairly handy so I nicked a bit at the start. I looked around and thought I’d nicked a bit too much here so I thought I would just let him roll.

“Then I had somebody come up my inside so I didn’t feel half so bad then. I just cruised around the bottom part of the course and a couple of people came up and passed me so I just let them take me on and save a bit of energy for myself.

“I was determined not to ride a ride until I was on the straight. I pulled him out and he took off then I thought I was going to get caught again at the end. I just had enough energy to push him out a bit and I managed not to fall off.

“I was thinking ‘where is the line?’ - when I took up the lead I was glad to see it coming. You can’t help but think that you are going to get beaten when you have one come up your inside like the runner-up did, but I knew he would stay the distance.

“It was just a case of whether he had the speed to keep going at the end against something that might have had a little bit more toe, but luckily his stamina pulled out and he switched up a gear and was a willing partner.”

After the race Rennie was presented with the Golding Perpetual Challenge Plate, silver photograph frame, £125 Golding voucher and a box of Powters celebrated Newmarket Sausages.

And she laughed: “The yard had the eyes on the prize of the sausages and they wouldn’t have been happy with anything else! I’ve had people shouting at me across the gallops in Newmarket all week. The reaction to this has been great.

“All the lads talk to each other and they often asked which one is the Town Plate horse when we were out. They were telling them ‘this is the Town Plate winner’ on Friday and I thought ‘Oh God do you have to?!’

“I was on Radio Suffolk in the morning before the race, so I might have another invite back on there on Monday morning.”