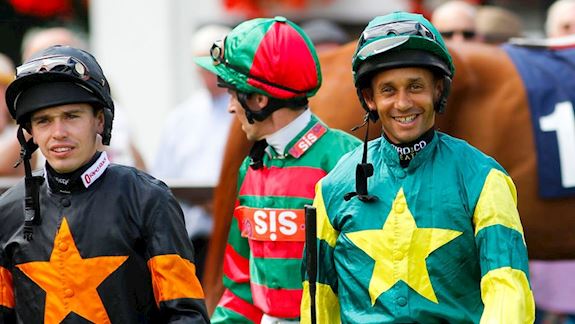 Aspirations of making it as a jump jockey may be over for James Ferguson but Miss En Scene could boost his career as a trainer on Friday by securing what he admits would be a “dream” success in the bet365 Fillies’ Mile at Newmarket.

Ferguson, who partnered a combined total of 30 winners point-to-pointing and under rules during a stint as an amateur rider, now stands on the brink of landing a breakthrough first Group One success in just his third year with a trainer’s license.

Having experienced big race glory during his time as assistant to the likes of Charlie Appleby and Jessica Harrington, the 31 year old hopes he can deliver the goods with the daughter of Siyouni and repay the trust owner Sheikh Fahad has placed in him.

Ferguson said: “Initially I wanted to be a jump jockey, and though my dream never really died I think it reality hit home.

“I was working at Sir Mark Prescott’s at the time and although I loved riding I think I got to the stage where I got more enjoyment out of the training side of things and now here I am.

“It would be a dream if Miss En Scene won on Friday. I’ve not played it out in my head as I don’t want to get carried away.

“Sheikh Fahad is a wonderful supporter of racing and it would be great win in his colours and repay the trust he has put in me.

“The good thing about this is whatever the result I’ve got a good filly on my hands that has bags of ability and I’m confident she will run in big races next season.”

The margin of Miss En Scene’s four length debut success at Haydock Park in July may have been a surprise to some, but Ferguson had been shown clues she was capable of such a performance in a racecourse gallop.

He said: “I took her to Chelmsford for a racecourse gallop and Cieren Fallon rode her. It wasn’t an exertion piece of work but I had two or three older horses in it.

“She went through the motions was pushed out the last 100 yards which was the first time she has been off the bridle. It was then we went to Haydock and we quietly knew she just might be above average.

“I’m not a gambler or a betting man but when we saw the opening price a few of them in the yard had a few quid on her and she cut in very quick!”

Pitched straight into pattern race company on her next start Miss En Scene backed up her debut win with victory in the Group Three Prestige Stakes at Goodwood - a success that confirmed her quality in Ferguson’s eyes.

He added: “I understood her price (7-1) at Goodwood as her race at Haydock she beat nothing. I knew she was good enough to get black type and I was expecting a good run but the fact she won was fantastic.

“It was the first time she was under a bit of pressure and Oisin (Murphy) just said ‘come on now’ and she just took a bit of time to get into her stride, but as soon as it clicked she had gone.

“Oisin rode her very coolly and if he wanted to he could have got there quicker. He was aware he was going to get there and gave her a beautiful ride, but I think with another furlong she would have gone again.”

Unlike most of her rivals on Friday Miss En Scene has the advantage of having had an outing on the Rowley Mile after a behind closed doors racecourse gallop at the track last month, which Ferguson reports to have gone perfectly to plan.

He added: “She has been on the track and handled it well. After Goodwood the first thing Oisin said was that she needs a mile.

“Although the Rockfel is a wonderful race I didn’t think she had much to prove. She came out of Goodwood fine but I didn’t think there was much point running over seven (furlongs) again so we decided to come straight here.

“She did a nice piece of work on the racecourse and she seemed to handle it fine. We are very lucky the track is on our doorstep.”

Although Ferguson has praised his team in helping him prepare for Friday’s race there is one person in particular he believes has been a big help throughout - his father, former trainer and bloodstock agent John Ferguson.

He added: “I’ve got a lot of really good people around me and I can’t stress enough this is not just me who has got her here, it's the whole team.

“I genuinely believe if you have happy people you have happy horses. I’m delighted with the way the horses chill out here and that is down to the careful management the team put in.

“My father has been a massive help and he has been on the phone every day. He has been there the whole time. We talk through every runner and race plan.

“You couldn’t really ask for anyone with more experience than my dad to be helping you. I hate to admit it, I probably call him a fair bit more but it is great to have him on board and he really enjoys it as well.”

Ferguson’s focus may be on Miss En Scene’s training regime, but he proved equally adapt behind the microphone last month in the 2021 Henry Cecil Commentator Challenge at the track and in last year’s Furlong Factor, a charity singing competition organised by Racing Welfare.

He said: “The thing about the commentator challenge is that it was all a lot of fun. Me, Ed (Crisford) and George Boughey all used to live with each other so we are the most competitive people in the world.

“I was only really nervous when I was walking up to the commentator’s box as before we were all having a bit of a joke about it. As soon as I put the microphone down I wanted to do it again though as I really enjoyed it.

“I think I was a bit robbed of the result as I got stitched up having the two and a quarter mile race to call!

“I did the Furlong Factor last year as I used to write my own songs coming through school and university but somewhere in the archives you will find the album that never got made!

“To be fair I got to the final of Furlong Factor all wrong. I tried to be really clever and went for a Mumford & Sons song but I should have kept it simple like I did with Starman by David Bowie in my semi-final.

“For the last two years training has taken over but music is something that I will come back to as it is a good release.”

Back to the day job and though Ferguson may be content with how his training career has gone to date, he hopes this is all part of a continuing upward curve for the future.

He added: “I’m pleasantly surprised how things have gone but we have all worked very hard to get here.

“I wouldn’t be here without the owners who have supported me and they have taken a massive gamble so early on, but I strive to always be better.

“This is a stepping stone and we have to strive to get better and it is a benchmark for next year.

“I’m very content with where we are but I want to do better and with horses like Miss En Scene and El Bodegon it makes it all very exciting.”