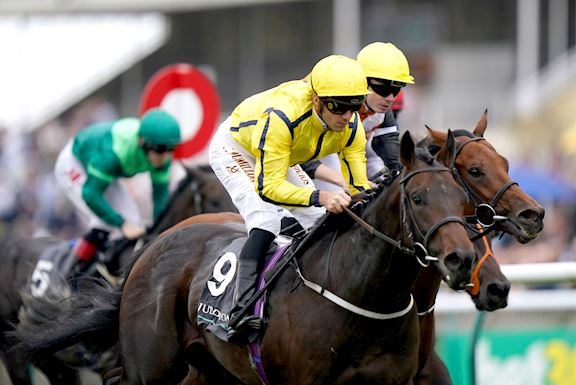 Richard Fahey has saddled 10 Group One winners in his training career but hopes to land his first ever Classic on Saturday when Perfect Power lines up in the QIPCO 2000 Guineas at Newmarket on Saturday.

Perfect Power, who races in the colours of Sheikh Rashid Dalmook Al Maktoum, has already won twice at Group One level, taking the Prix Morny at Deauville and Juddmonte Middle Park Stakes at Newmarket in 2021, both of which were over six furlongs.

Now North Yorkshire-based handler Fahey hopes he can replicate that form in the mile contest, which is not only the first Classic of the year but the opening race in the 2022 QIPCO British Champions Series.

It is 30 years since the winner of the Middle Park Stakes went on to win the 2000 Guineas the following year – when Rodrigo de Triano handed legendary jockey Lester Piggott his 30th and final Classic winner in 1992.

Speaking at an online press conference organised by British Champions Series, Fahey said he and his team are relishing taking on odds on favourite Native Trail.

He explained: “The Guineas is one that has eluded me but we are looking forward to it. It’s why you get up in the morning for days like this. As a small trainer in the north, we are taking on the big boys and I just hope we can beat him (Native Trail).

“The opportunity to get a colt like this guy is very few and far between and I just love him. He is an exciting horse to train even if he never over-expresses himself at home – he just sleeps and eats.

“He’s a dude – a very relaxed character that never gets flustered or turns a hair. But when he gets to the track he picks up and has a blistering turn of foot.”

A son of Ardad, Perfect Power began his 2022 season perfectly at Newbury on April 16th, when he made a winning reappearance in the Group Three Greenham Stakes over seven furlongs.

The trainer said: “I didn’t have him fully wound up for the Greenham.

“In my own mind, I felt he would stay seven furlongs but I also felt we’d learn a little bit about him. The last thing I wanted for him was to be fully wound up because it had looked like we wouldn’t be going for the Guineas after Newbury, we would then have had a dry spell of two months or so before he would run again.

“It’s a huge step to go from six furlongs to a mile, which I hate doing, so that is why we didn’t go for the Craven and went to Newbury instead.

“We used Newbury as a prep. I thought he was a little bit chubby round the edges walking round the parade ring, but in my mind I left improvement in him. He needed the run and took a big blow afterwards, which is unusual for one of ours. There was no hiding place in the race and it has put him spot on and I haven’t had to do much with him since. We are very happy.

“As he was such a decent two-year-old and a dual Group One winner, it is always in the back of your mind whether they have trained on and so the Greenham was a relief. We were happy with his work and pleased with were with him – physically, he has done very well. But you just love them to get back on to the track and do it.”

One area of concern for Fahey is that Perfect Power is very headstrong on his way to post when at the races, a complete contrast to his behaviour at home.

Fahey continued: “It is a worry – as soon as he hit the grass, he goes! He goes from 0-45 in six strides and Christophe (Soumillon, jockey) said if he went another 2mph he’d be gone with you.

“He went to post extremely quickly in the Middle Park and it would have been a trainer’s excuse if he’d got beat. It’s just one of his traits and I don’t know where it comes from as he is a completely laid back character at home – where I need him to pick his bridle up, not wind him down.

“It’s not a major issue but something we’ve just got to keep an eye on. We’ve sat down and had a think about and in the Guineas we’ll go down early. We’ll put Christophe up 10 yards before he goes on the track and maybe lead him and trot for half a furlong or so.”

With the colt’s sire Ardad only having ever won over the minimum trip of five furlongs, Perfect Power’s stamina over a mile is not guaranteed.

However, this does not overly concern Fahey, who continued: “If you didn’t know anything about the horse’s pedigree and you saw his Greenham win you’d be quietly confident he’d get a mile, so we’ll see.

“He is going to be a stallion whatever, but you want to try and not ask him the impossible so that is why I had a good sit down and think about it. His dam won over 1m 2f and her best form was probably over 1m 4f so that gives you confidence. When he races, he switches off and sits behind his bridle so that gives us every chance of getting the trip.

“Christophe thought he’d get seven furlongs last year but we didn’t feel the need to do it then and didn’t go for the Lagardere as he’d already had six runs and we were happy to miss it. When he was a two-year-old, his pre-Royal Ascot gallop was the best I’d seen by any two year old at that stage of his career. He’s got a lot of natural speed.”

Looking at Saturday’s contest, for which 15 colts were declared today, Fahey has an open mind but admits he tried to secure the favourite Native Trail for himself when he was offered for sale at last year’s Tattersalls Craven Breeze-Up Sale.

He said: “There are quite a lot in there that look like they’ll get further so there will be no hiding place and you’ll have to get the trip well. It can only be a plus he’s already won at Newmarket.

“Funnily enough I tried to get a client to buy Native Trail when Norman Williamson sold him as a two-year-old. We were an under-bidder but weren’t too far off, so he’s a horse I’ve always been taken by. He’s done nothing on track to change my mind and his performance the other day was very good.”