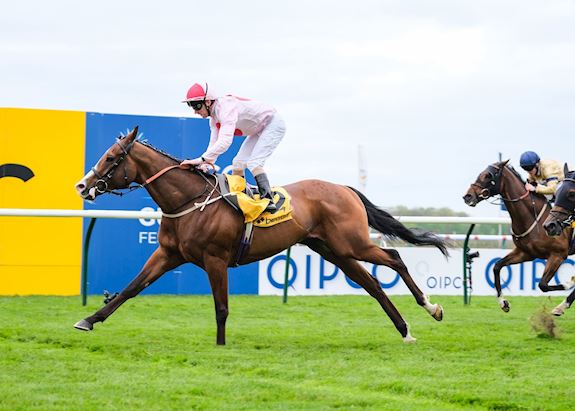 Living Legend (11-1) caused something of an upset at Newmarket on day one of the 2022 QIPCO Guineas Festival when landing the feature Group Two Betfair Exchange Jockey Club Stakes (1m 4f), handing owners Barbara and Alick Richmond a first Pattern race success in the process.

However, Living Legend kept finding more and more for jockey Joe Fanning and went to take the honours by a length and three quarters from Yibir. The winner is trained by Charlie and Mark Johnston. Mark Johnston won the Jockey Club Stakes when the sole licence holder on four occasions with Jukebox Jury (2010), Universal (2013), Communique (2019) and Sir Ron Priestley (2021).

Barbara Richmond, who owns Living Legend along with her husband Alick, said: “That was unbelievable, it is total and utter magic! This horse is just staggeringly good.

“We deliberated for about two weeks as to whether to run here or in the Huxley Stakes next week at Chester and we had a long conversation on Thursday morning between Mark, Charlie, Joe and ourselves and ultimately it was Alick who said we should go for it. We had a good horse to beat in Yibir but we thought ours was a good horse as well so we’re absolutely over the moon. This is our first ever Group win and we’re just delighted.

“We bought him off Mark for about 20,000 guineas or whatever it was as we were very keen to have a Camelot as we thought he was a great sire. He had tendonitis as a youngster and didn’t come out until the end of the year, but we won second time out and was superb as a three year old until he had his injury after the May Meeting at Chester.

“We gave him a year off and he came back into the yard the following April but couldn’t take the training so he had a further year off and then he came back, Mark and Charlie got him training again and he has just gone from strength to strength.

“We always thought he was a good horse from the start but after the injury you’re never sure, but it’s as though he was never injured. He is just magic and I say to everybody, he loves it! He would run every day if you let him and he goes on that gallop and won’t wait for the others. As soon as he’s on that gallop he’s off and he glides up them, he’s just a superstar. I can’t say any more than that.

“I think when you’re a small owner nobody ever thinks you’re going to win up against these major owners and he’s never gone off favourite, but every time he keeps winning. He goes off again on his next start long odds and he wins and at some point I hope now that people will recognise that he really is a Group horse.

“I think we’ll be looking at the Coronation Cup I’d think. Obviously we’d need to talk to Mark and Charlie but it looks the obvious race. We go to the Oaks and the Derby every year for the last 10 years and the whole family will be there. We always have a table in the Derby Suite with my mum who is 91 so it would be just fantastic to have him in that. We’d have to supplement him but we’ve just won a nice pot!”

Charlie Johnston added: “Barbara has been an owner with us for a long time and we’ve had a lot of success, but not at this level. Her enthusiasm is infectious and she comes to see her horses every week near enough! She used to run a syndicate called the Passionate Partnership and that just about sums her up really!

“The story behind the horse is pretty exceptional really as he was as good as retired really, but he’s had two years off the track and is back better than ever.

“He’s a beautiful horse and we didn’t pay a lot of money originally all those years ago but we’ve always liked him. He won at three year old handicap at Bath on Good Friday that we’ve run a lot of our good horses in over the years and went to the Dee Stakes as a Derby Trial at the time and got injured. He had two years off after that and he’s a special horse to come back, he’s a legend by name and a legend by nature.

“We were so thrilled after because of everything that we’ve been through with the horse. He was pretty much a field ornament for 18 months and we made an entry for this race perhaps even before we won the Magnolia Stakes at Kempton – just knowing that it’s a race that usually cuts up and we’ve won it for the last two years. It’s a race that we like to target and this had been on the radar for a while.

“He had a tendon injury and we had half a go coming back that autumn and failed, so he was out in the field in 2020 and then came back into training last year. He won very impressively at Pontefract last September and it was at that point we said to Barbara whether she wanted him back.

“Essentially when the prognosis was career-ending she said she didn’t want to continue paying the costs of keeping him in training, so we said we’d take him off her but made her aware that we’d pop him in the field for a year and likely try again. We did that and when he came back and ran to 102 at Pontefract, we said to her that the risk is always there but if she wanted him back she could have him back. Thankfully she said yes, it was a good deal for all of us and it’s even better that this victory is in her colours.

“It was a 5% percent chance for this horse to come back, so it’s amazing that he’s done so to this level. If he was rated 60 you wouldn’t have tried again, it was only the regard that we held him in as a three year old that it was worth trying again.

“I think from memory Barbara came to us through one of our syndicates and had a 5% share and got the bug from there. She’s now got four in training with us and one with Tom Dascombe I think, so it’s great.”

Mark Johnston said: “Legend by name Legend by nature  but they say never run away from one horse. It's Barbara's first Group winner and as normal I didn't give any instructions to the jockey but Barbara gave him a long talking to which she principally told him we're not here for a laugh. I don't know why have so much success in this race as we treat every horse on its merits but he toughed it out.

"Even before this race, Barbara had been looking at how much it was to supplement into the Coronation Cup and she said he'd go there if he won this."

Trainer Charlie Appleby said of runner-up Yibir: “Like Will (Buick, jockey) said he is one of those characters where the race was never quite run to suit him really. He is one of those horses where they go a gallop and everything comes back at him and he thinks he is King Kong and he is electric then.

“When he is getting into battle half a mile out, it’s not for him. As Will said it is a classic excuse but he just said about the dip and you see him switch his lead he is a big old brute to be coming out of it. He is not smooth.

“Even when he was winning in America he was climbing all the way round. He is unconventional when he is doing it. The plan is to head to the Man O’War Stakes in two weeks’ time. We were coming up here A to get a run in before America and B we knew coming into it was one of those races that might not go his way. As I said to Will when he normally comes off a turn it gives him the signal he is gone but that turn down is a mile and a quarter out and that is a long way for him.”