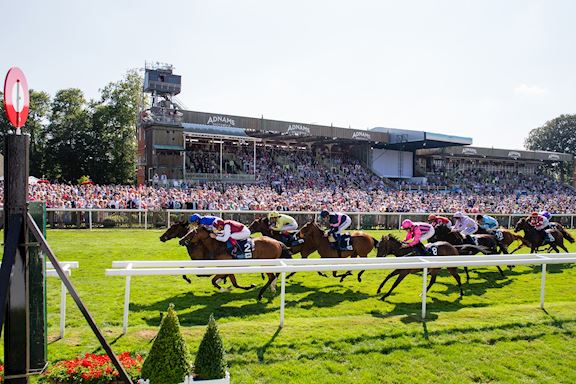 The Jockey Club appoints new Chairmen for Newmarket based businesses

The Jockey Club has appointed new Chairmen for Newmarket Racecourses, Jockey Club Estates and The National Stud it announced today. Each appointment comes into effect on 1st, January 2018.

William Wyatt succeeds Julian Richmond-Watson, who will stand down after more than eight years as Chairman. Wyatt is Chief Executive of Caledonia Investments plc and a trustee of The Rank Foundation charity.

He and his wider family breed predominantly Flat racehorses at Dukes Stud, near Newmarket, and have a number of Flat horses in training in the UK. He has been part of the Newmarket Racecourses Committee since 2015 and was one of eight new Members elected to join The Jockey Club, effective as of 1st, January this year.

Richmond-Watson, a Member of The Jockey Club and a former Senior Steward, has been Chairman of Newmarket Racecourses since 2009.

The Hon. Peter Stanley succeeds Andrew Merriam as Chairman of Jockey Club Estates. Stanley was elected a Member of The Jockey Club in 2001 and appointed a Steward in 2014.

He owns and manages New England Stud in Newmarket, where he has been based since 1983, and also manages Stanley House Stud. He is Chairman of The Jockey Club Rooms and The Racing Centre, which provides facilities and services to support stable and stud staff, and is also a Director of Jockey Club Estates.

Merriam is a Member of The Jockey Club and currently Deputy Senior Steward on its main board. He became Chairman of Jockey Club Estates in 2007, taking over at the time from Julian Richmond-Watson.

The Duke of Roxburghe is appointed Chairman of The National Stud, succeeding Ben Sangster. Elected as a Member of The Jockey Club in 1996, the Duke was appointed as a Steward in January 2007.

Previously Chairman of the British Horseracing Authority’s Disciplinary Panel, he is the owner of Floors Stud and has owned and bred racehorses for nearly 40 years. The Duke is also involved in the day-to-day running of Roxburghe Estates and is a director of Circle Property plc. He has also been a director of a number of other private companies, including Majestic Wines and Townhouse Hotels.

His appointment at the National Stud follows the completion of Jockey Club Member Ben Sangster's second term as Chairman.

The National Stud is the breeding and education arm of The Jockey Club, providing a range of important services to support the Thoroughbred breeding and racing industries. The Stud foaled over 100 mares for a second successive season in 2016, with Tim Lane taking over as Stud Manager from Brian O’Rourke earlier this year.

"I would like to thank the retiring chairmen for all their hard work and dedication. Their contribution has been invaluable to The Jockey Club.

“We are very fortunate to be able to call upon Will, Peter and Guy [The Duke of Roxburghe] as able successors and thank them in advance for taking on these roles that require a significant amount of personal time and effort."