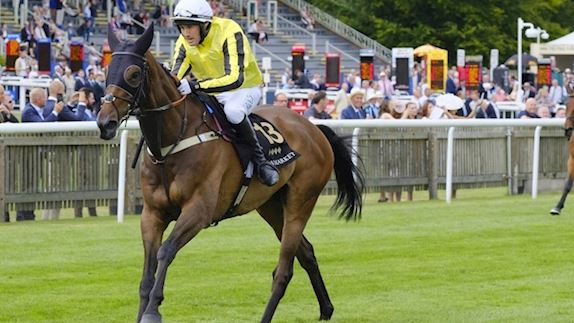 A field of 12 runners has been declared for the 349th running of the world’s oldest surviving race – the Newmarket Town Plate – at 5:45pm on Summer Saturday Live with The Vamps on Saturday 25 August at Newmarket’s Adnams July Course.

Sponsored by Newmarket-based businesses Golding and Powters, this historic contest is run over a stamina-sapping three-and-three-quarter mile course, much of which is only used for this single race each year, but ends on the same home straight as all races at the Adnams July Course.

For many years one of the most prestigious races in the land, the Town Plate is now a glorious historical eccentricity, competed for by amateurs and boasting a jockeys’ prize of a Perpetual Challenge Plate; a photo frame; a voucher from the Newmarket High Street clothes shop Golding; and a box of Powters Celebrated Newmarket Sausages.

These jockeys’ prizes are also embedded in the race's history and all riders who compete are true amateurs – the race has been won by both an accountant, a Sheikh and a neurosurgeon in recent years – and the rest of the prize package on offer to the winning rider is very much about tradition.

The race is set to take place at 5.45pm, shortly before the start of the performance by The Vamps on the main stage, and will prove to be an exciting end to the day’s racing.

About the Newmarket Town Plate riders

Derek is an accountant and rides out twice a week as a hobby and to keep fit. Derek has ridden in the Newmarket Town Plate on six previous occasions, winning the race in 2007 and 2010. In 2018, Derek is hoping for an elusive third victory.

Michael is dual-purpose trainer from Cheshire and finished third in the Newmarket Town Plate in 2017. Michael's staff ate all the Powters sausages before he had a chance, so he is back this year to hopefully win some more. Michael turned 64 a not long ago, and says you are never too old to race.

Gemma is a Programme Manager from Cheshire and finished fifth in the 2017 Newmarket Town Plate. Gemma is raising money for St Rocco's Hospice again in 2018.

Stephen competed at national level showjumping in the 1980s. Following a break he resumed riding in 2006 and started race training in 2013. Stephen has now ridden in six races and is back for another attempt at the Newmarket Town Plate.

Michael won the 345th running of the Newmarket Town Plate in 2014 and is hoping to repeat his success in 2018.

Jon is a farrier and has ridden nine winners on family-owned pointers. Jon was third in the Newmarket Town Plate in 2015 on his 27th birthday and this year he is hoping to commemorate the big 30 with a winner! Jon is raising money for Warwickshire and Northamptonshire Air Ambulance.

Sara is a trainer with a handful of horses in training for her father. Alongside training horses Sara is also a full time dog walker, often walking 20 plus dogs a day. Sara is looking forward to riding in the Newmarket Town Plate for the first time and is excited about doing the steering instead of giving the instructions for a change.

Lisa has two children, Jack and Jemma, and is a registered carer for her mother. Lisa loves to ride out and go racing in her spare time. This is her first time riding in the Newmarket Town Plate.

Patrick is an independent bookmaker and Head of Gaming at Bangor and Chester Racecourses. Patrick has ridden in the Newmarket Town Plate twice, including finishing third in 2016. He is hoping to go two better this year.

Tim is a former international showjumper who has competed in numerous Senior Nations Cups for Great Britain including the World Games at Aachen in 2008. Since stepping down from showjumping Tim is now working in the family real estate company Unex Group, but continues with Point-to-Pointing whenever he can. Tim won the race last year and is looking forward to defending his crown.

Phil has ridden in a couple of charity races and now wants to achieve his ultimate goal and ride in the historic Newmarket Town Plate.

Maurice has been race riding for 15 years and has ridden in 38 races at 26 different tracks. Over the years Maurice has raised over £150,000 for various charities. This is Maurice's first year riding in the Newmarket Town Plate.