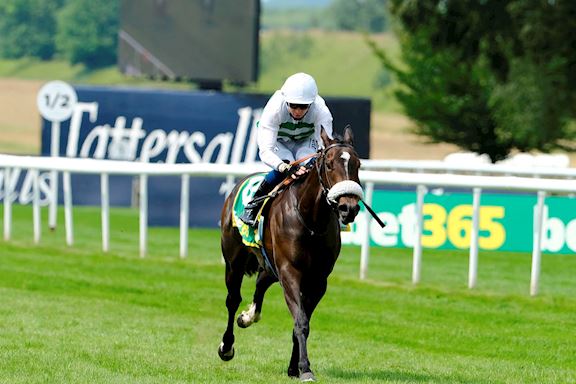 Andrew Balding, who currently leads the UK Flat Trainers’ Championship, has outlined plans for some of his best two year olds as entries are revealed today for the principal juvenile contests during the Gold Season on the Rowley Mile at Newmarket in September and October.

Sandrine is unbeaten in three starts, with the Kirsten Rausing homebred daughter of Bobby’s Kitten following up her debut victory at Kempton Park in May with success in the Group Three Albany Stakes at Royal Ascot and the Group Two Duchess of Cambridge Stakes (sponsored by bet365) at the Moët & Chandon July Festival at Newmarket on 9th July.

The Kingsclere handler is looking at the Group One Juddmonte Cheveley Park Stakes on Saturday 25th September, Juddmonte Day at the Cambridgeshire Meeting, as a long-term objective.

Balding said: “Sandrine looks very good and I’ve been thrilled with her last two runs. She will probably run in the Lowther next then all eyes will be on the Cheveley Park. She will carry a penalty (at York) but we didn’t want to wait until Newmarket to run her again. She seems to be very versatile ground wise. She is a very smart filly and is an absolute pleasure to train.

“I think both of her two Group wins are equally as impressive as the other as they were under two very different conditions. It was nice to see her do it on the quick ground in the Duchess of Cambridge Stakes and prove she is not a one trick pony and that she has got the ability to handle different conditions. That form has been given a boost which is always nice to see.

“She had worked well on fast ground before the Albany so we thought she would handle it. We were worried going into the Albany with the ground going as soft as it was but managed to cope with it. She looks good on any surface.”

Berkshire Shadow was also a winner at Royal Ascot when landing the Group Two Coventry Stakes over six furlongs. The Dark Angel colt was stepped up a furlong on his most recent outing when runner-up in the Group Two Vintage Stakes at Glorious Goodwood and Balding is considering both the six-furlong Group One Juddmonte Middle Park Stakes on 25th September and the seven-furlong Darley Dewhurst Stakes on Saturday 9th October, day two of the Dubai Future Champions Festival, as potential targets.

The trainer said: “He got a little bit lost in the ground in the Vintage before he got his act together in the last half a furlong. We might drop him back to six and look at the Gimcrack at York before looking at options like the Middle Park or Dewhurst in the autumn. He is a very talented horse and if he encountered soft ground again I imagine he would perform better on it now having raced on it.

“It was a great effort he put up in the Coventry Stakes before that. He was super impressive in that and it is great that race is starting to work out after Ebro River who was fifth that day has now come out and won a Group One. Like Sandrine, it is a pleasure to have him in the yard.”

Balding’s most recent two year old Pattern race success this season came last Saturday (7th August) on the July Course when Majestic Glory landed the seven-furlong Group Three 100% Racingtv Profits Back To Racing Sweet Solera Stakes. A Group One outing on the Rowley Mile could be in prospect for the daughter of Frankel for the bet365 Fillies’ Mile on Friday 8th October.

Balding commented: “It was a very good performance that Majestic Glory put up in the Sweet Solera Stakes at Newmarket on Saturday and her breeding suggests she should stay further than seven furlongs.

“She hadn’t had a massively hard race the time before and this looked a fairly good opportunity at this level so we took and I thought she looked very smart. She showed there she has a great attitude and she is very likeable.”