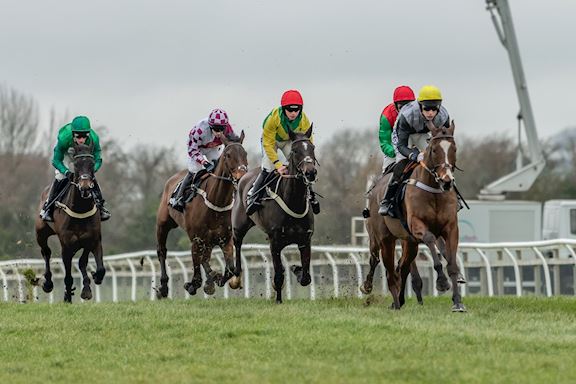 Paul Nicholls’ win in the Betway Kingwell Hurdle on Saturday ensured the trophy for one of Somerset most important races returned to the county.

Nicholls last trained the winner in 2013 when Zarkandar galloped to victory but Grand Sancy’s gritty performance under Harry Skelton gave him his fourth success in the race.

Skelton punched the air in delight as he crossed the winning post and said after the race: “It means an awful to me. Obviously, Paul set me and Dan (Harry’s brother and trainer) up, got us running, got us on our feet.”

Nicholls added: “Harry gave him a good ride and it was nice to give him some rides today. Grand Sancy might go to the Supreme at the Cheltenham Festival. He is a good horse that is on the up and keeps improving.”

It was a day when huge crowds and celebrity guests enjoyed eight superb races. The Great British Bake Off’s Prue Leith swapped her mixing bowls for a race card to enjoy a day at the races with her husband John Playfair. The celebrity chef and television presenter tucked into a ‘delicious’ chilli con carne before judging the best turned out horse in the second race, the Betway Heed Your Hunch Handicap Chase, choosing Bigmatre as her winner.

Prue was a guest of racecourse director John Sunnocks with whom she went on a  riding safari in Botswana several years ago.

“I knew Johnny and thought, he’s a rider so I’l ask him to come and we had a fantastic time. We’re here today as Johnny’s guests for a nice day out and so far its been great,” she said.

General manager Huw Williams commented: “It was a really good day with some super racing and exciting finishes. We had a good sized crowd and the atmosphere was fantastic.”

Wincanton next races on Wednesday, February 27. Tickets are available from £12 with the first race off at 1.50pm click here to buy today.