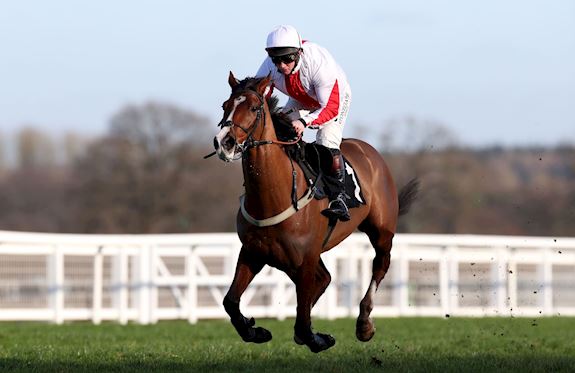 Goshen bounced back to his brilliant best with an emphatic success in the Betway Kingwell Hurdle, helping secure a double at Wincanton for jockey Jamie Moore.

Racing fans will never forget the heart-stopping moment that Goshen unseated Moore at the final flight of the JCB Triumph Hurdle at last year’s Cheltenham Festival with the race at his mercy.

But all that was forgotten here at Wincanton as the gelding, trained by jockey Jamie’s father Gary, booked his return ticket to the meeting for a tilt at the Unibet Champion Hurdle by stealing the show in the Grade Two feature race.

Having failed to beat a rival on his sole start over hurdles this season at the same level in the International Hurdle at Cheltenham in December, the 100-30 chance eased to victory by defeating last year’s winner Song For Someone by 22 lengths.

Gary Moore watched the race from home and said afterwards: “You can’t believe how pleased I am! They were probably going fast enough and Jamie just had to sit on him.

“I was a little bit concerned as it’s a sharp two miles around there and I think he probably wants a stiff two but I’m just over the moon as it looks like he is back.”

Asked if the plan is now to run in the Unibet Champion Hurdle, he added: “I certainly hope so. Let’s see how he comes back in the morning. I’ve not spoken to Jamie yet and Steve (Packham, owner) who plays a massive part. He is entitled to take his chance now on what he has done today.”

Winning rider Jamie, who was earlier on the scoresheet aboard the Nick Williams trained Dentley De Mee (4-1) in the Betway Casino Handicap Chase, praised his father for getting Goshen back on track.

He said: “This horse has done the most unorthodox training methods for this but dad is a proper horseman. The things he has been doing with him have been bemusing me but it has worked. He knew on Tuesday morning he had him back following his last piece of work.

“He has beaten horses today he hasn’t beaten before. Song For Someone is a good yardstick but I was getting weight off them.”

Meanwhile jockey Micheal Nolan went one better than Moore when teaming up with trainer Philip Hobbs to secure a 469-1 treble with the Minehead handler, which was completed by a first victory over fences for Golden Sovereign, who took the Betway Handicap Chase by two lengths.

The 31 year old rider said: “I had a treble at Ffos Las in 2013 which was a while ago. It’s great to get a day like this. A massive thanks to my boss Philip Hobbs and the lads at home that get them ready. I work hard and try hard today is my day.”

Of the 7-2 winner he added: “He is a very consistent horse who stays really well and jumps well. He had the lighter weight on his back today and wasn’t afraid to take it up when I did.

“He jumps for fun and tries really hard. He is a pleasure to ride and I’m glad I got to have my turn on him.”

Nolan and Hobbs had got the ball rolling when Longshanks took a step forward from his recent defeat over course and distance to claim the first victory of his career, prevailing by two lengths in division one of the Betway “National Hunt” Novices’ Hurdle.

Nolan added: “We came here the last day to ride him just to get his confidence back and to go and have a nice round. Today he looked a different horse and the penny dropped.

“Two miles on soft ground is fine. As the ground dries up you would want to step him up in trip as he is a bit of a galloper.”

Pol Crocan made it two wins from as many visits to the track in division two of the extended mile seven event after proving three and three quarter lengths too strong for Blumen Glory.

Nolan said of the 17-2 winner: “He had that experience of a proper race last day he was a lot more switched on. He was a bit keener, travelled better, jumped better.”

While racing continues behind doors, trainer Milton Harris provided some much missed atmosphere in the near-empty stands when shouting home stable stalwart Aintree My Dream, who got up to deny the hat-trick seeking Flagrant Deltiep by half a length in the Betway Heed Your Hunch Handicap Chase.

Harris said of the 11-1 winner: “The owner has been with me since I started through thick and thin and we’ve had lots of good horses. I bought this off Dan (Skelton) who is a good mate of mine and he has been an absolute legend.”

The last race of the day, the Heed Your Hunch At Betway Handicap Hurdle, was won by the mother and daughter team of Sue and Lucy Gardner as 40-1 outsider Lightonthewing claimed an 11-length victory.

Earlier First Lord Du Cuet (9-2), from the David Pipe yard had run out an eight and a half length winner of the #betyourway At Betway Handicap Hurdle.