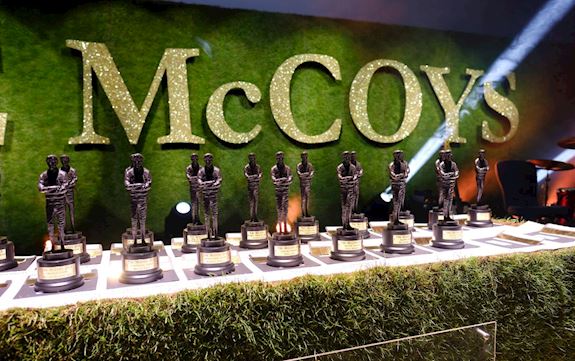 The McCoys, the awards which recognise excellence in Jump Racing, will be presented by The Jockey Club for the fourth time at Cheltenham Racecourse on the evening of Thursday 7th October 2021. First staged in 2017, the McCoys also took place in 2018 and 2019 before the COVID-19 pandemic caused the cancellation of last year’s event.

The McCoys are named in honour of the most successful Jump jockey of all-time, Sir AP McCoy, who rode a record 4,358 Jump winners during his career and was champion Jump jockey in Britain an unprecedented 20 times. He retired from the saddle on the final day of the 2014/15 season at Sandown Park.

Winners at The McCoys are determined by performances at all Jockey Club Racecourses which stage Jump racing. The 2021 McCoys will take into consideration achievements between July 1st 2020 and April 24th 2021, when the bet365 Jump Finale at Sandown Park brought the season to a close. The Jockey Club Racecourses which stage Jump racing are Aintree, Carlisle, Cheltenham, Exeter, Haydock Park, Huntingdon, Kempton Park, Market Rasen, Sandown Park, Warwick and Wincanton.

Awards which acknowledge the Leading Owner, Leading Trainer, Leading Jockeys (Professional, Conditional and Amateur), plus the Leading Horses (Novice Hurdler, Hurdler, Novice Chaser and Chaser) are based on the number of wins, with count-back on placed finishes in the event of a tie. The remaining winners at The McCoys are determined by a panel of judges and recognise the full cross-section of those involved in Jump racing including stable staff, as well as the actual horses.

Previous winners at The McCoys, which will be hosted by Rupert and Oli Bell in 2021, include Nicky Henderson, Tiger Roll, Native River, JP McManus, Harry Skelton, Bryony Frost, Altior and Ruby Walsh.

A full list of winners for the first three years of The McCoys can be found online at here. (NB: When The McCoys were first staged in 2017, only performances at Jockey Club Racecourses in the South West Region were taken into consideration when determining winners).

Sir AP McCoy said: “Despite COVID-19 restrictions preventing racing fans from being at racecourses to see them, the 2020/21 Jump racing season still delivered some amazing and ground-breaking performances and it’s fantastic that they will be formally recognised with an awards ceremony again this year.

“I look forward to the event, which not only reflects upon the achievements of the previous season but also looks with anticipation to the year ahead. I just hope the winners will be happy with a trophy of me as their reward.”

Ian Renton, who as Regional Managing Director of The Jockey Club runs Cheltenham Racecourse, added: “Although we only staged The McCoys for the first time in 2017, the event already feels like an established date in the Jump racing calendar and we are extremely grateful to those who continue to support it.

“It was disappointing but inevitable that we had to cancel in 2020, but we look forward to this year’s event and to celebrating the tremendous achievements of so many of those involved in our sport.”