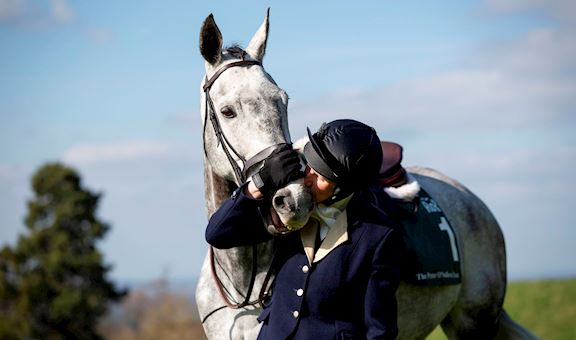 Saphir Du Rheu was a talented hurdler and chaser trained by Paul Nicholls and owned by the Stewart family. A nine-time winner under rules, his career highlight came when winning the Grade 1 Mildmay Novices’ Chase at Aintree’s Grand National Festival. He also finished second in the 2015 World Hurdle and a close fifth in the 2017 Cheltenham Gold Cup.

These days he is looked after by Charlotte Alexander and here she explains what a typical day in retirement looks like for him.

CLAIM TO FAME:  Winner of the 2015 Mildmay Novices’ Chase and runner-up in the World Hurdle during the same year

FAVOURITE THING TO DO: Jump at speed!

TYPICAL DAY: Saphy lives out in a very large field with my four other horses where they often have a good gallop around with their tails in the air.  They come in at night when the weather changes in the Autumn.  Saphy gets ridden either round the farm with my dogs to check the sheep and cattle, or through the woods and round the lanes checking the gardens in the local villages, or I give him a schooling session.  He is fed twice a day on Gain Freedom Mix and absolutely loves his food.

ANNOYING HABITS: His nickname is “nibbler” and you do have to be quite careful you don’t end up being bitten, particularly when he is being girthed up when he is fit.

FITNESS ROUTINE: Due to Corona Virus and eventing not looking likely to take place in the near future, he is doing a lot of dressage and showjumping schooling.  He will start fast work once we know when we will be likely to be competing.  Hopefully team chasing will be able to go ahead in the Autumn and he will be racing fit for these events.

COMPETITION: Saphy loves Team Chasing and progressed to Opens in one season. He is the lead horse for Team Rideaway and last Autumn lead his team to win the Cotswold Open where he beat his stablemate Ulck Du Lin’s team to second place by a couple of seconds.  I thought I was going to win with Ulck as we had a super slick round, and could not believe it when I beat my own time with Saphy!

Saphy is however really enjoying eventing and after a couple of BE100s runs went straight into Novice last season, this was his first season eventing and he is showing a real flair for it.  He is very bold and clever cross country.  He tries to be careful showjumping and absolutely loves the big atmospheres.  He now has enough MERs to go Intermediate and I had been brushing up his dressage and showjumping over the winter.  The plan was to do a Three Day Event this summer.

I train with Louise Robson of Thoroughbred Dressage and will be competing at BD Elementary level, Lou wants to compete Saphy at a higher level which is very exciting.   I am also aiming to compete at Foxhunter Level (1.20) BS this summer we have been jumping BS 115m courses over the winter.  I train with Owen Moore and he has been incredibly helpful in getting us to this level.  Saphy is a real workman and loves learning.  He has a fantastic brain and once he has got it we are away. He particularly loves the canterwork and will soon be able to do canter pirouettes, his half passes are coming on nicely too!

The aim is for Saphy to go Advanced BE and I would love to compete at Blenheim Horse Trials.  Lou wants to compete him at PSG BD!

We have days out with the Beaufort and Saphy loves either galloping across the vale where he has scope you could not believe when tackling the hedges or he will pop over a big metal gate .  I am so lucky to have such a horse.

BIGGEST ACHIEVEMENT IN RETIREMENT: I think going clear around Barbury Horse Trials Novice cross country which was up to height with a lot of questions.  We had only done a couple of Novices before running here and it was his first season.

QUIRKS: Saphy knows when he does well and the look on his face says it all.  My friend Hayley is always there with the polos and she has to be careful she does not get knocked over in his enthusiasm to have some!

KEEPING HEALTHY: Saphy receives regular visits from my lovely physio girl Laura Browne.  He has the best blacksmith in the world in Andy Hicks as they say no foot, no horse.   I do not go for supplements, but give them some R-Oil in their feed which is Gain Freedom Mix. I am fairly old fashioned and do strap my horses.  He also loves living out in the field with his friends. 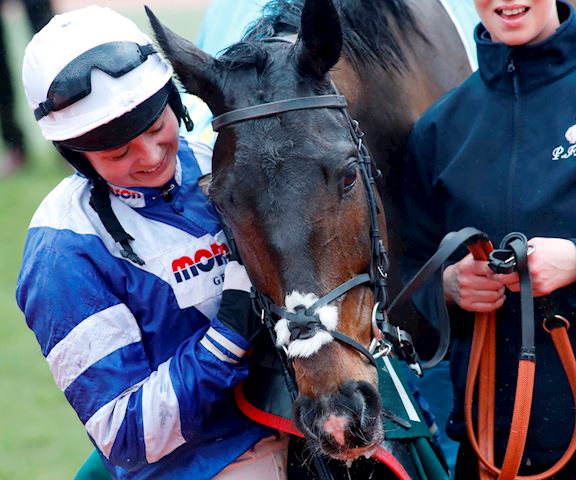 Catch up on the latest news, entertainment and competitions plus much more from all across The Jockey Club Group.