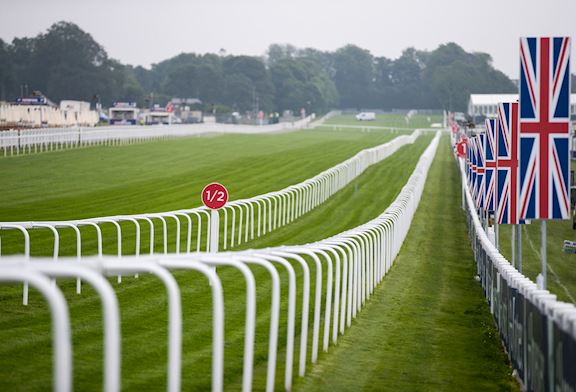 Cape Of Good Hope provided Ireland's 20-time champion Flat trainer Aidan O'Brien with a first success in the £50,000 Listed Investec Blue Riband Trial (2.45pm, 1m 2f 17y) at Epsom Downs yesterday (24th April), which is the opening trial for the £1.5 million G1 Investec Derby back at the course on June 1.

Ridden by Ryan Moore, the three-year-old son of Galileo, the 2001 Derby winner, was settled in mid-division in the early stages of the 10-furlong contest as Massam (Mark Johnston/Franny Norton, 25/1) and Sameem (James Tate/Oisin Murphy, 9/1) set a strong pace at the head of affairs.

The front two came back towards the rest of the seven-runner field approaching Tattenham Corner with 4/1 chance Cape Of Good Hope making eye-catching headway entering the straight.

John Gosden tried to win the race for the fifth year in a row, and seventh time in total, with Turgenev (Frankie Dettori, 11/4) who progressed to take the lead at the two-furlong pole, before O'Brien's charge swept to the front well inside the final furlong.

Cape Of Good Hope had to hold off the late challenge of the Ed Walker-trained Cap Francais (Gerald Mosse, 5/1), who raced keenly, but made good headway from last to finish a half-length behind the winner in second.

Turgenev was a further three-quarters of a length back in third. The well-backed 9/4 favourite Arthur Kitt (Tom Dascombe/Richard Kingscote) stumbled badly leaving the stalls, nearly unseating the jockey and failed to trouble the leaders, finishing fifth. The winning time was 2m 6.28s on ground described as Good, Good to Firm in places.

The winner of today's Investec Blue Riband Trial usually gains a wildcard entry into the G1 £1.5 million Investec Derby, but Cape Of Good Hope had already been entered in Britain's premier Classic and richest race.

Cape Of Good Hope, owned by a Coolmore partnership, is a full-brother to globetrotting superstar Highland Reel, a seven-time G1 winner, who won the 2017 G1 Investec Coronation Cup at Epsom Downs on his only outing at the course, and Idaho, who was third in the 2016 G1 Investec Derby behind Harzand.

Second to Godolphin's Quorto in the seven-furlong G2 Superlative Stakes at Newmarket in July, Cape Of Good Hope finished a creditable third in the G2 Royal Lodge Stakes in September over a mile on his final start as a two-year-old and benefitted from today's step up in trip.

Kevin Buckley, Coolmore's UK representative, reported: "We are absolutely delighted, that was great.

"Cape Of Good Hope was always going to enjoy the step-up to 10 furlongs and further. He has done particularly well over the winter and is a good looking horse.

"He brought some of the best form into the race, having chased home Quorto in the Superlative, before finishing third in the Royal Lodge. Coming to Epsom, you never know what is going to happen, so it was good to get that experience around here.

"Cape Of Good Hope is a full-brother to Highland Reel who won the Coronation Cup and Idaho who was third in a Derby, so the family has experience and success around here.

"We were very pleased with that performance and Ryan said the colt settled nicely. There was a decent pace in the race, Cape Of Good Hope responded well and we will see how he comes out of this.

"Aidan has said openly that the colt was just ready to start, so he will get him home, see how he is and talk to the owners to see where they want to go.

"Cape Of Good Hope is entered in the Investec Derby anyway, so I'm sure we'll see how the rest of the trials go. It is not my position to say whether he will come back here for the Derby, but you would like to think so.

"Ryan said he handled the track well and that the ground was absolutely perfect - Andrew Cooper [Clerk of the Course] has done a wonderful job here.

"That is just our fourth runner in this race and the highest we had finished before today was fourth with both James Cook (2018) and Claudio Monteverdi (2016), so it's nice to get into the winner's enclosure.

"We have a lot of trials coming up over in Ireland, Chester, Lingfield, York and more. Once we get Leopardstown and the rest sorted out, then we will have a better idea of where we are, but we couldn't be happier with that, we are delighted."

O'Brien is the most successful current trainer in the 12-furlong Investec Derby with six victories, including Galileo.