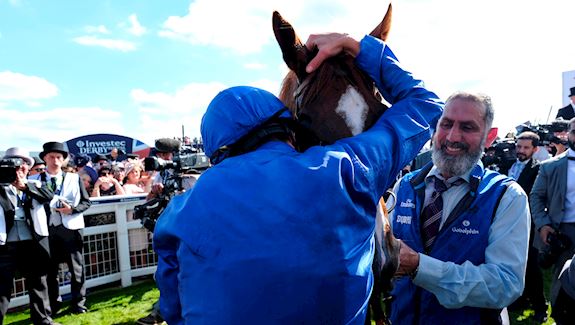 How does the Investec Derby Entry System work?

By Andrew Cooper - Clerk of the course

When the Starting Stalls burst open for the 2019 Investec Derby on Saturday 1st June, and the 14 or so runners seek their place in history, it is the conclusion of an entry process that began some 18 months earlier.

There are several stages at which a horse can be entered in the Investec Derby, and the first of these is when the horse is still a Yearling i.e. one year old. For regulatory purposes every horse has its birthday on 1st January, and with most foals born between January and April of a particular year they become Yearlings the following January.

entering as a yearling

Yearlings can be entered in the Investec Derby in early December of their Yearling year. At this time of their life they will probably not be named or have ever galloped, and may have just been sold at auction at the Sales before going into training. Horses do not race in this country until they are at least two years old. Entry at this stage costs £560 per horse, which as with all entry costs will be paid by the Owner. About 400 horses usually enter at this stage.

There are then no further entry stages or payments for the Investec Derby until March of the year of the race itself – when the horses are now three years old. To stay in the race their Owners then pay a further £1100, and on average 120 of the original 400 will do so. The remainder will have either proved not good enough to compete in the Investec Derby, or may have been gelded, thereby becoming ineligible.

the year of the derby

In early April any horses now considered Investec Derby prospects that were not entered as Yearlings can join – at a cost of £9000 per horse. On average 10 horses will come in at this stage.

In mid-May the pool of horses reduces further, when on the same day the remaining Yearling entries and the April 3yo entries have to pay £3400 and £11250 respectively to stay in. At this stage the possible Investec Derby field will reduce to about 25.

Finally, on the Monday of Investec Derby week these 25 or so horses will have their entry ‘confirmed’ at a cost of £2800, and about 16 will do so. On this day there is also one final chance to enter the race – at a cost of £85000, which is roughly the prize money that a horse will win for coming 4th in the race. This is known as a ‘Supplementary’ Entry.

48 hours before the race the final set of runners is ‘declared’, though there is no charge for doing so.

In recent years Epsom has also introduced two ‘Wild Card’ entry options for the Investec Derby – a horse can gain a free entry to the race by winning either the Investec 2yo Conditions Stakes in late September or the Investec Blue Riband Trial Stakes in April of the following year.

The maximum field that can run in the Investec Derby is now 20, and if more than 20 want to run the least able, according to official ratings, will be eliminated first.