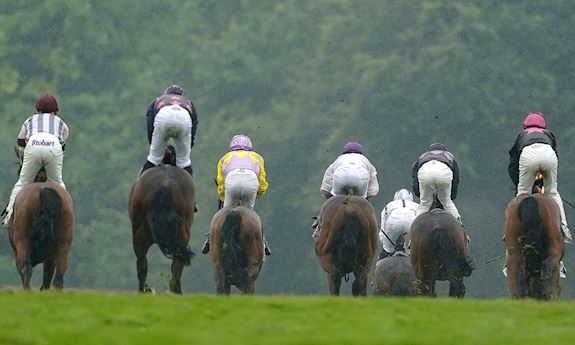 No one had quite anticipated the amount of rain which fell on day one of the Cazoo Derby Festival but while the weather disappointed, the action on the track certainly didn’t.

With two Group One races on the card – the Coral Coronation Cup and the third Classic of the season, the Cazoo Oaks – there had been plenty to look forward to.

Frankie Dettori rode Snowfall into the record books to win the Cazoo Oaks by the biggest margin in the race’s history – then admitted: “I’ve won many Classics but not one as easily as that.”

The 16-length demolition job at Epsom Downs was a 21st career Classic victory for the 50 year old Italian and a second of the season after winning the QIPCO 1000 Guineas on Mother Earth at Newmarket last month.

Afterwards a beaming Dettori admitted not even he had realised quite how easily he had won. He said: “I knew I was at least eight in front. It is quite remarkable because I pulled up by the stables and everyone pulled up by the winning post!

“I’ve won many Classics but not one as easily as that. The question marks today were the ground and the distance but she proved me wrong that she does stay and that she doesn’t mind the ground.

“It is great. I was watching the documentary on the great Fred Archer yesterday and I’ve equalled his record of 21 Classic winners so I’m now only nine behind Lester Piggott.”

Dettori’s long career has seen him ride high profile winners for trainers all over the world and he added: “Racing has been good to me. The Oaks was my first Classic I don’t know how many years ago now, but I’m still talking to you, riding in the big races on the good horses so I will take it and I’m very happy.”

Trainer Aidan O’Brien said: "We're obviously delighted. We thought Snowfall was a very good filly last year and we were disappointed a few times, and she had a few things happen to her that meant races didn't work out for her.

“She had a lot of experience, raced a lot and did very well over the winter physically, and the step up in trip as well. She's a very good-moving filly and showed a lot of class. We were just a bit worried about the soft ground today.

"We thought she was a proper Group One filly last year. Usually if they show that kind of class, it will come."

DWYER KEEPS IT IN THE FAMILY WITH “SPECIAL” VICTORY

Jockey Martin Dwyer described winning the Coral Coronation Cup for his father-in-law, trainer William Muir, as a “special” moment – then revealed he had feared he might lose the ride on Pyledriver before the race had even started.

The 45 year old jockey has now won the three biggest races staged at Epsom Downs after landing the 2006 Derby on Sir Percy and the 2003 Oaks on Casual Look. However, it was a first ever Group 1 winner for Muir in a training career which has spanned 31 years.

Pyledriver was making a second appearance at Epsom Downs, after finishing 11th in last year’s Derby. The four year old son of Harbour Watch was a most tenacious winner in today’s mile and a half contest, making all the running before being briefly headed approaching the final furlong. Pyledriver then rallied gamely to regain the lead and repel the sustained challenge of 7-4 favourite Al Aasy by a neck.

Afterwards an emotional Dwyer said: “I love this place, I always have. I’ve had some great times riding here and I’ve been lucky. It’s not an easy place to ride as things can go right and wrong. I’ve watched tons of replays and videos of past races, even last night and this morning to refresh my memory as you can’t take anything for granted, but that makes it special when you win.

“Half my worry was losing the ride on him. It is not easy when you are not fashionable and you are not riding. You will have owners own a good horse like him and then it doesn’t pan out and he doesn’t win.

“The Derby was a write-off and then there are always people saying, ‘why don’t you use X, Y, Z as they are riding tons of winners and why are you using him as he is not high flying at the moment?’ But that is sport and that is what happens so you have to really fight your corner.”

Winning trainer William Muir, who now operates in a partnership with Chris Grassick, added: “I started training in 1990 and I’ve got touched of smidgens in Group 1s.

“I’ve never had a Group 1 winner but this is it and this is what we do it for. To get these type of horse this is why we do it. I’m lucky as we have got it and my partner Chris Grassick has only been at the job five minutes and he has got a Group 1 winner!

“I came here thinking I’d win. We had a meeting with the owners yesterday at the Leigh Delamere services and if you had seen us and thought we were footballers they are trying to tap this footballer up to get him to move to a different club. We were like cloak and dagger what we were going to do.”

Trainer George Boughey celebrated victory with his first ever runner at Epsom Downs as Oscula landed the opening race of the 2021 Cazoo Derby Festival.

The filly was a 15-2 winner of the Cazoo Woodcote EBF Stakes over 6f, following up her victory at Brighton just 11 days ago. A two year old daughter of Galileo Gold, Oscula stayed on resolutely to take the honours by three lengths under jockey Mark Crehan.

Before the race the going was officially Good, Good to Firm in places in the back straight but it was changed immediately afterwards to Good to Soft.

A delighted Boughey said: "That was a pretty good performance. Her work had been good and we intentionally took her to Brighton before to give her a chance to come down the hill.

“We didn't really have Royal Ascot aspirations before. We thought we might take her to the Woodcote and the Empress, at Newmarket, but Mark (Crehan) got off the horse at Brighton - and he's ridden a lot of our two-year-olds this year - and he was very bullish.

“It was a great performance. She's very quick, but she's by Galileo Gold and there's plenty of stamina in her pedigree, so I think she will get a mile. She probably does show enough speed for five furlongs at the moment, but I do think she'll get further, which is another string to her bow.”

Boughey added: "I think Royal Ascot may well be on the agenda now. I'll chat to Nick (Bradley) and see what the owners want to do, but the Albany Stakes has got to be a consideration."

Course specialist Corazon Espinado made it win number four at Epsom Downs when taking the Coral ‘Beaten A Length’ Free Bet Handicap over an extended mile.

The six year old Iffraaj horse, returned at 12-1, was always in a prominent position and scored by three and a half lengths under Hollie Doyle.

Trainer Simon Dow, who is based locally in Epsom, said: “The stable’s only across the road so he’s probably the first one to not get wet! He’s incredible. He’s a little track biased – he loves Lingfield and he loves Epsom, although he has won away.

“It’s a tremendous achievement for a little horse to win two years on Oaks Day. He won the concluding seven furlong handicap the first year it was run and this is a regular mile handicap here on Oaks Day and it’s really exciting for us.”

Asked about the ride Hollie Doyle gave him, Dow replied: “There aren’t enough superlatives for Hollie. She’s ridden winners for us consistently over the years and it’s always a privilege to have her.

“We’ll come back here whenever there’s a race for him. He’s just one of those horses. He’s won £150,000 in prize money, he comes from a great family, is by a great sire and I’m sure he’s going to go on and win more races – he’s not finished yet.”

Doyle later completed a double on the day when winning the Listed Play Coral ‘Racing-Super-Series’ For Free Surrey Stakes on the favourite, Mehmento, for trainer Archie Watson.

Blue Cup became the first winning favourite on day one of the Cazoo Derby Festival when taking the mile and a quarter Cazoo Handicap in the hands of champion jockey Oisin Murphy.

The 9-2 market leader now has the John Smith’s Cup at York and Royal Ascot’s Wolferton Stakes at Royal Ascot as possible future targets.

After a slow start, the five year old Kendargent gelding made rapid headway to make his challenge entering the final furlong and quickened impressively to score by five and a half lengths.

Winning trainer David Menuisier said: “I am glad that for once he showed his true talent. We’ve been pretty frustrated over the last few weeks because he should have won here six weeks ago and the door just kept on shutting on him in the last furlong and a half – so we left Epsom with revenge to plan.

“We thought it was going to be at York but the horse completely lost the plot before the race. I think it was probably the set-up of the course, so it was a matter of putting everything together today and things have worked out so I’m delighted.

“He’s got a really good turn of foot so I wasn’t too worried (about the front runners) and it felt at the time that they were going far too quick up front. Even so he had a fair few lengths to make up but looking at Oisin he seemed very confident so I had every confidence he’d run well.

“The next step is the John Smith’s Cup back at York and maybe the hood and the things have made a difference so we may try and go back there for that. It’s a long way away though and looking at Royal Ascot we may have an entry in the Wolferton Stakes and take things from there.

“I think he’s a black type horse in the making and he has been for a long time – he had a little setback last year which is why we gave him the rest of the year off but he didn’t need so much time. We decided to give him extra time for him to perform this year and we hopefully have a top horse.”