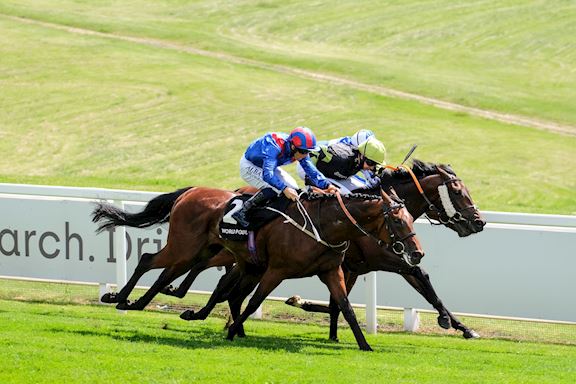 Solent Gateway sprang a 28-1 shock in the opening race on Cazoo Derby Day to give trainer Tom Dascombe his first winner at Epsom Downs at the 43rd attempt.

Jockey Hayley Turner and her partner only hit the front in the final strides of the race and needed to hold off another strong and late challenger, King Frankel, to take the 1m 2f World Pool At The Tote Handicap by a nose in a thrilling photo finish.

The victory means Tom Dascombe has now had a winner at every UK Flat track. He said: “Epsom is the only Flat track I’d never had a winner at. I took a two year old there yesterday (Flaming Rib) and strongly expected that to win and it finished second and I just thought, ‘I’m never going to get a winner at Epsom!’

“Derek Passant who is a joint owner is a great fellow and I couldn’t be more than happy for him. He is there and I’m not and I feel a bit embarrassed, but I had already committed to go to another owner’s birthday in deepest, darkest Wales.

“Derek wanted him to go to Epsom but I didn’t think he would get in so I took him to Chester last week to try and get a penalty, but as it turned out we needn’t have done that as this race never filled up and we got in fine. I’m delighted to win a race like this with a maiden.

“Maybe he has just started to grow up and the two runs in a week has helped him. I think he will get further but we will not worry about that and we will just enjoy today first and foremost. To get a winner on Derby Day is pretty special and a huge thrill.

“I’m sure he will now go up a few pounds for that but we will make another plan at a later date.”

Despite a nervy wait for the result of the photo finish, winning jockey Hayley Turner insisted she had been confident. She said: “I thought I had won, then I asked Ben (Curtis, rider of King Frankel) and he said ‘I’m not sure, it was tight’, which put a bit of doubt in my mind.

“He is a bit inconsistent and I think he liked racing tight and the challenge in close to him and it got him motivated a little bit, so it probably did me a favour. A good result for the Dascombe team.”

Turner added that the ground was “good to soft” and “a little bit more tacky and holding” than yesterday.

Mark Johnston, trainer of the 5-2 runner-up King Frankel, said: "He did well to get so close. Ben (Curtis) said he jumped well enough but just didn't get into his stride. He was rousting him along but in the end he just had to sit there.

“It was fantastic how well he finished and it will be Royal Ascot next stop. He'll have entries in both the mile-and-a-quarter and the mile-and-a-half handicaps, and we'll choose between the two."

Roger Varian, trainer of third home Greatgadian (5-1), said: “He ran great and it was annoying to get beat. He’s a nice handicapper though and he’s progressing. He did everything right and the final 100 yards up the hill just caught him out.”

Greatgadian’s jockey Silvestre De Sousa added: “It was a good run and he travelled well behind the leaders. He just didn’t last home. The ground is tacky.”