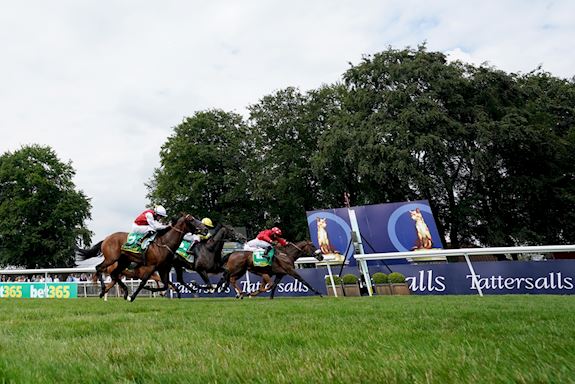 Nine years after Mayson landed the Darley July Cup the colours of his owner-breeders David and Emma Armstrong were carried to success at the July Festival again as his son Blackrod took the Each Way Extra at bet365 Heritage Handicap over six furlongs.

The 11-1 chance, trained by Michael Dods and ridden by Silvestre De Sousa, moved up to challenge entering the final furlong and ran on well to get up and score by a neck from Apollo One (12-1).

David Armstrong said: “He was a bit unlucky at York but we are very pleased today. We were confident of a big race because of York and how he had been working at home.

“He is normally a bit sluggish out of the start but he flew home today. He is a hell of a finisher. Personally, anything that goes over seven furlongs I get a nose bleed as we are only interested in sprinters, of course. We will keep him at six but going up to seven is not out of the question at all.

“Because he is a big horse he just needed that first run of the season to blow the cobwebs off. Michael (Dods) has got a full sister at home but she is not named yet so hopefully she could win a race or two.

“We did think as a two year old he could be a bit better than a handicapper. Obviously, it is all about what they do on the racetrack but his work at home is good and though the chance of making it at Pattern race level on percentages is very slim, that is what we are dreaming of and why we are in this game.”

James Doyle, rider of runner-up Apollo One, said: “It was a good run and a great effort to carry that weight so we’re really pleased with him.

“The winner didn’t join me until quite late on and obviously we were on our side by ourselves so I’m very proud of him.”